Jhye Richardson revealed Australia coach Justin Langer urged him to stake his case for World Cup selection prior to his man-of-the-match performance against India.

With Mitchell Starc, Josh Hazlewood and Pat Cummins rested after the Test series, Richardson took figures of 4-26 from his 10 overs at the SCG, the best return of his young international career.

Australia successfully defended their total of 288-5, winning the first match of three in the one-day international series by 34 runs to become the first team in international cricket to taste victory in 1,000 matches across all formats.

The World Cup begins in England on May 30, but Richardson, 22, is trying not to look that far ahead.

“Justin has said it is a great opportunity to be able to push your selection [case] for the World Cup,” he said.

“But we’ve still got a lot of white-ball cricket between now and then. So I think it’ll be for me to concentrate on these two games coming up then if I’m lucky enough to get picked for the next tour, it’ll be concentrating on those games.

Peter Handscomb (73) Usman Khawaja (59) and Shaun Marsh (54) all registered half-centuries at the SCG, while Marcus Stoinis (47 not out) helped Australia set a competitive total on a slow pitch.

Rohit Sharma blasted a stunning 133 off 129 deliveries for India, but Richardson and debutant Jason Behrendorff (2-39) shone with the ball, a fast start reducing the tourists to 4-3.

MS Dhoni (51) and Bhuvneshwar Kumar (29 not out) were the only other India batsmen to register scores of note, with the wicket of Virat Kohli one Richardson will always remember.

“Getting [Kohli] is one that I’m going to treasure for a long time,” he said.

“I was actually disappointed when the ball came out. I probably bowled a bit too straight. I had a fielder there who hung on to it, so it is a wicket I will remember for a very long time.

“But [I am] more happy to get the win. There was a period there when they had a partnership through the middle and it almost could have taken the game away from us. But we were lucky to get Dhoni out lbw and we kept getting wickets from there on. When you get teams three down [early], that’s what you aim for.

“I am ecstatic and really excited for the team. It’s good to put a personal performance on the board but I am really excited in the way Australian cricket is heading.”

The second match is in Adelaide on Tuesday. 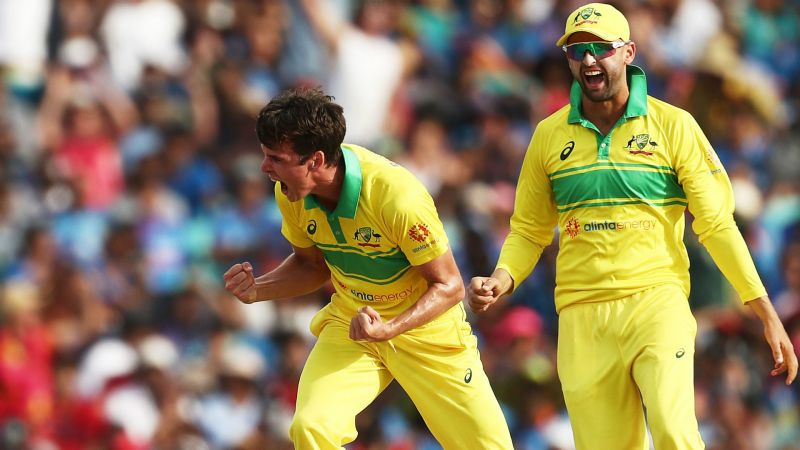