Jamaica, 21 August : After reeling at 2/3 in the early stages, a fightback from captain Babar Azam and Fawad Alam has lifted Pakistan to 212/4 at the end of day one in Jamaica.

Azam and left-hander Alam prevented a disastrous collapse, putting on 158 and blunting the home barrage before Alam succumbed to injury.

Winning the toss and electing to field, Kraigg Brathwaite’s decision seemed a smart one, with Kemar Roach dismissing Abid Ali in the first over for one.

The slip cordon was busy in the early overs, as Roach and new-ball partner Jayden Seales found their rhythm. Roach found Azhar Ali’s outside edge as he was caught by Joshua da Silva for a duck, while Seales joined in the celebrations after a successful review to dismiss Imran Butt.

Azam and Alam calmed proceedings, nursing Pakistan to 62/3 when lunch was called after 25 overs. Seeing off the barrage from Roach and Seales, the pair played out four maidens against Kyle Mayers and Jason Holder, who came on in spurts of four and six overs respectively.

Seeing off the shine in the first session gave Pakistan freedom after lunch, with both members of the partnership reaching half centuries. Azam brought up his 18th Test fifty with a trademark back-foot drive for four, while Alam also brought up his half-century with a boundary,

Pulling Alzarri Joseph to the fence.

The hot and humid Jamaican conditions play a part in proceedings, with Jahmar Hamilton taking the keeping gloves from Joshua da Silva, struggling from cramps. The batting side were not immune either, with Alam, feeling the same effects, struggling to bat.

Alam retired hurt on 76 after overtaking his partner in the runs column, and Azam fell soon after for 75, edging to Jason Holder, taking a good catch low at second slip.

The wicket put the brakes on Pakistan’s fightback, though Faheem Ashraf and Mohammad Rizwan quashed any potential of a collapse, pushing the score past 200 before the light was called 74 overs into the day.

Rizwan (22) and Ashraf (23) will resume tomorrow, with Alam likely to return at the fall of day two’s first wicket. At stumps Pakistan were 212/4. 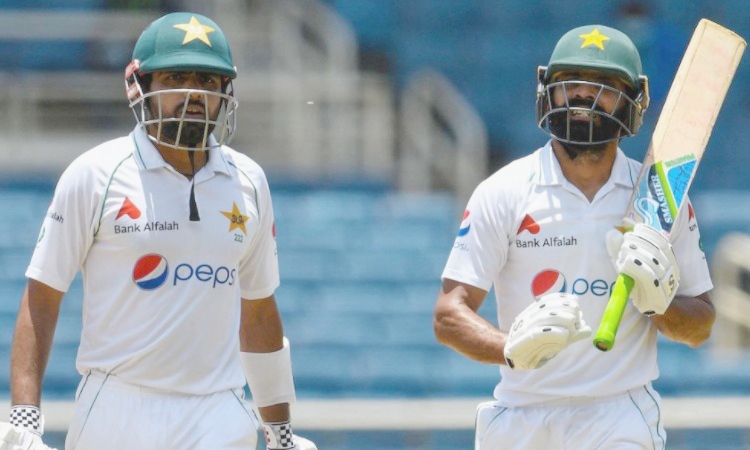