MUMBAI: While Afghanistan celebrate their lofty status as a Test-playing nation, far away in Mumbai, head coach Lalchand Rajput is busy plotting how to instil a five-day temperament into a team more attuned to the hard-hitting nature of limited-overs cricket.

In a historic decision on Thursday, the International Cricket Council (ICC) granted Afghanistan and Ireland full membership, putting them in an elite group of 12 sides permitted to compete in the longest form of the game. 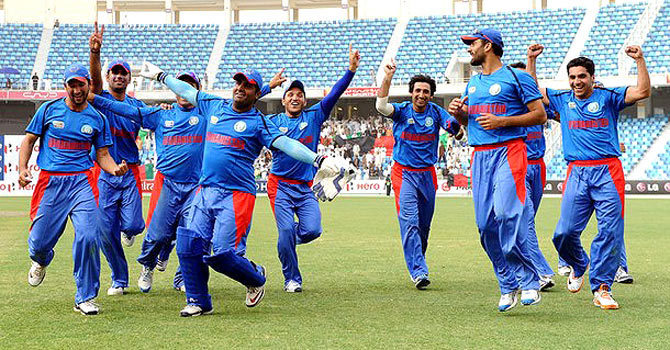 Cricket gained popularity in Afghanistan when refugees residing in Pakistan after fleeing a homeland ravaged by the Soviet-Afghan War took the sport home with them in the 1990s.

They first played among the sport’s minnows until gaining One-day International status seven years ago, and in June 2013, the ICC granted Afgha­nistan associate membership, the second tier behind the Test-playing countries.

“It’s a great achievement for them. Every country would like to be called as a Test-playing country,” former India cricketer Rajput told Reuters in an interview.

“They have been working hard for the last couple of years. And this is the reward which they got after consistently performing, especially the last year has been very good.

“We started beating Test sides, we beat Zimbabwe, we beat Ireland. It’s a big thing for the sport in Afghanistan and its people. They are so passionate about cricket there.”

A former Mumbai batsman with a first-class average of close to 50, Rajput was manager of the India team that won the inaugural World Twenty20 in 2007.

“Everybody was keenly waiting for this ICC meeting to happen,” Rajput, who played two Tests and four ODIs for India, said on Friday. “They were all very excited that now they will all be called test players. Every cricketer’s dream is to be a Test cricketer, that’s the real test. This is a big, big thing for them.”

Having already played in multiple World T20 events, the Asian side made a stellar debut in the 50-over World Cup in Australia and New Zealand in 2015.

They have also been impressive in the Intercontinental Cup, a first-class competition for associate members.

“This is a big challenge. Being from Mumbai, we know this attitude of ‘khadoos’ [stubbornness] in the region’s cricketers and that has to be imbibed in the Afghanistan players,” the 55-year-old Rajput added.

“Because you have to have a price on your wicket, you can’t throw your wicket easily. Plus the temperamental aspect, the mental toughness you know. And playing big innings, that’s very, very important.”

Rajput feels the Afghan players are natural hard hitters of the ball and his job is to make them understand the need to spend more time in the middle instead of chasing quick runs.

“In the Intercontinental Cup we used to get out early, the maximum score used to be 250-300. But this year, we played against Ireland and you will be surprised we got over 500 runs for eight wickets declared,” he said.

“The captain [Asghar Stanikzai] got 145 and another guy got a hundred. So they are getting into the mode of scoring big hundreds. Slowly and steadily we will be there, we will improve.

“I can’t change it overnight, it will take some time. But we are going in that direction.”

Turning to matters with the ball, 18-year-old leg-spinner Rashid Khan looks a real prospect and he recently took 7-18 in an ODI against West Indies after a strong showing in the last edition of the Indian Premier League (IPL) Twenty20 tournament.

“We have the bowling. But yes, we have to look at options as well because in Test cricket you require people to take 20 wickets,” the coach added.

“In ODI cricket you have to bowl tight. So the mindset has to be to take wickets rather than bowling tight. “We have got one more left-arm wrist-spinner. I watched him playing for the under-19s and said ‘I want him’.

“Slowly I will make him play four-day games and give him confidence so that he gets better and plays the one-day format consistently. Just like Rashid, he is also a wicket-taking bowler.”