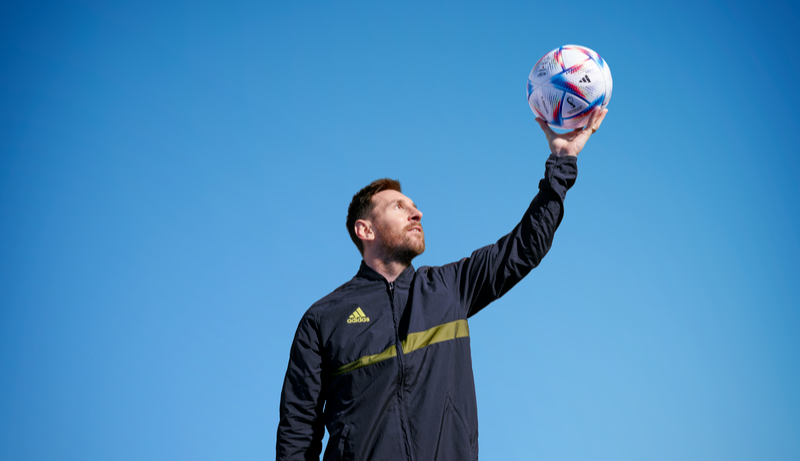 “This is a stunning, sustainable and high-quality Official Match Ball from adidas that will be enjoyed by stars performing at the top of their game on the world’s biggest stage in Qatar, as well as grassroots players everywhere,” said Jean-François Pathy, FIFA’s Director of Marketing.

“Al Rihla’s worldwide journey will represent the incredible reach of the FIFA World Cup and give fans a unique opportunity to engage with the event as excitement builds ahead of the big kick-off.”

Designed from the inside out using data and rigorous testing at adidas labs, in wind tunnels and on the pitch by football players themselves, Al Rihla provides the highest levels of accuracy and reliability on the field of play, partly due to its new panel shape and surface textures.

CRT-CORE – the heart of the ball, providing speed, accuracy and consistency for fast-paced action and precision, with maximal shape and air retention, as well as rebound accuracy.

SPEEDSHELL – a textured PU skin with a new 20-piece panel shape, improving the accuracy, flight stability and swerve thanks to macro- and microtextures, plus surface debossing.

“The game is getting faster and, as it speeds up, accuracy and flight stability become critically important,” said Franziska Löffelmann, the Design Director – Football Graphics & Hardwear at adidas. “The new design allows the ball to maintain a significantly higher speed as it journeys through the air. For the biggest global stage in all of sport, we set out to make the impossible possible with radical innovation by creating the fastest and most accurate FIFA World Cup ball to date.”

The ball was designed with sustainability as a priority; indeed, Al Rihla is the first FIFA World Cup ball to be made exclusively with water-based inks and glues.

Al Rihla means “the journey” in Arabic and is inspired by the culture, architecture, iconic boats and flag of Qatar. The bold, vibrant colours set on a pearlescent background represent the FIFA World Cup host country and the ever-increasing speed of the game.

Al Rihla’s first public appearance will be alongside legends such as Iker Casillas, Kaká, Farah Jefry and Nouf Al Anzi, who will be joined by a diverse mix of talents, including promising female footballers from Qatar, the UAE, Saudi Arabia and Egypt, plus next-generation players from Doha’s Aspire Academy.

The launch will mark the start of Al Rihla’s journey to ten cities across the globe – including Dubai, Tokyo, Mexico City and New York – where adidas is rolling out a series of initiatives aimed at improving access to and equity in sport amongst local communities.