Jammu, December 11: Andhra Pradesh lower-order batsmen held their nerves when it mattered the most to overwhelm Ram Dayal Punia’s heroic century, thus guiding their side to a narrow win by 2 wickets over Jammu and Kashmir in the penultimate over of their innings in the Vijay Hazare Trophy match at Cricket Club of India (CCI), Mumbai today.

Earlier, put into bat, the pathetic show of Jammu and Kashmir top and middle-order batsmen continued as J&K lost 9 wickets for a paltry total of 99 runs in 33 overs, before Ramdayal played a magnificent innings of 116 runs off 100 balls, studded with 13 fours and 4 sixes, to take his side to a respectable total of 208 runs in 48.3 overs. Ramdayal alongwith number-11 Umar Nazir made a big last wicket partnership of 109 runs, Umar contributed valuable 27 runs with the help of 3 boundaries. Parvez Rasool also contributed 17 runs with 1 four and 1 six. Ramdayal, in particular was in awe-inspiring touch, who showed application and guts and sent the rival bowlers on a leather-hunt after J&K’s disastrous start.

For Andhra Pradesh, Girinath Reddy was the pick of the bowlers, who took 4 wickets by conceding 29 runs in 10 overs, while Stephen captured 3 wickets, Harisankar Reddy bagged 2 and Manish Golamaru claimed one.

In reply, Andhra Pradesh chased the target in 49 overs, losing 8 wickets in the process, thus won the match by 2 wickets. Ricky Bhui top scored with 56 runs off 77 balls, while AT Rayudu contributed 39 runs and skipper KS Bharat scored 22 runs. Girinath Reddy made unbeaten 19 runs off 23 balls.

For J&K, Auqib Nabi was pick of the bowlers, who took 3 wickets by conceding 25 runs in his 10 overs, while Parvez Rasool, Umar Nazir, Abid Mushtaq and Waseem Raza shared 1 wicket apiece.
Andhra Pradesh earned 4 points with this win, while J&K has yet to secure any point so far in this tournament. 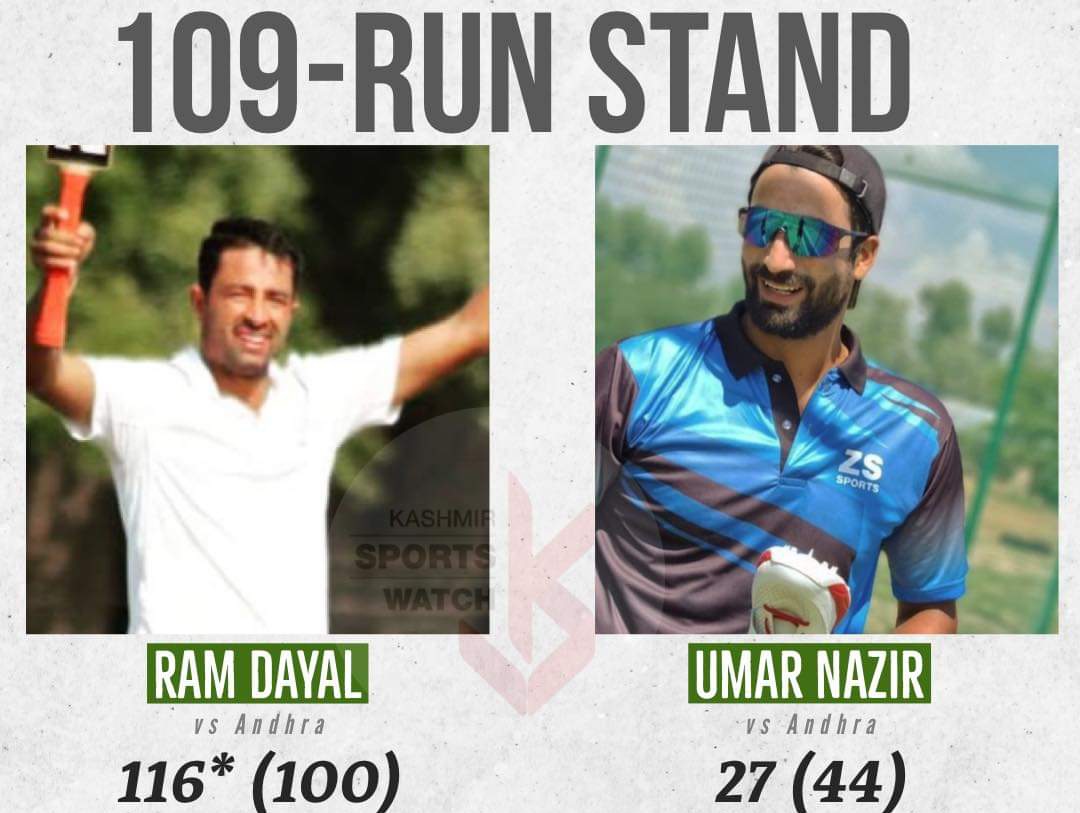