﻿ Ashes: Australia in command after bowling out England for 185 - Kashmir Sports Watch
HomeCricket

Ashes: Australia in command after bowling out England for 185

Melbourne, December 26: A brilliant bowling performance helped Australia to bowl out England for 185 and finish the day on a high despite losing David Warner early.

A bit of drizzle in the morning delayed the toss by 30 mins but with a forecast looking good for the rest of the day, the first day finished without further hiccups. Scott Boland became Australia’s 463rd Test player as the hosts opted to bowl first at the Melbourne Cricket Ground.

For Australians, the festive celebrations continued as they got off to a terrific start. England’s opening woes continued with Haseeb Hameed falling for a duck in the second over to Pat Cummins, poking at a delivery outside off and giving Alex Carey a simple catch.

Cummins was excellent in the opening session, extracting movement from the grassy wicket and soon dismissed Zak Crawley as well five overs later for a 25-ball 12. At 13/2, England looked in usual trouble but their skipper Joe Root paired with Dawid Malan to stabilise their innings.

While Root was confident, Malan was cautious as the duo neared a fifty-run stand. England would have gone to Lunch satisfied had it not been for another Cummins special. In the last over before the break, Cummins bowled a straightish delivery that caught Malan’s edge and he ended up giving a catch to David Warner in the slips.

The second session started well for England with Root getting to another fifty. But their misery continued when Root falling to Mitchell Starc soon after reaching the landmark. Ben Stokes and Jonny Bairstow forged a solid partnership, keeping the scoreboard ticking for the most part and thwarting Australia’s chances.

The host bowlers toiled, with Cameron Green strangling the scoring rate in the middle overs and was finally rewarded with a wicket when Stokes cut a shortish ball straight to Nathan Lyon at point. England slipped further with Jos Buttler falling to Lyon as the visitors went to Tea at 128/6.

More of the same continued in the final session. Mark Wood survived for 15 balls before falling lbw to Boland, who claimed his maiden Test wicket as England lost the review. Bairstow, who had held on until then, bravely holding onto one end, was undone by Starc’s short ball that reared onto him and had to be awkwardly fended off to the man at gully.

Lyon then wrapped up the innings, getting Jack Leach (13) and Ollie Robinson (22) in back-to-back overs as England were bowled out for a meagre 185.

In reply, Australia began confidently and were cruising for the most part. With the pitch easing out, Warner and Harris negotiated the initial overs expertly. Warner, in particular, was the aggressor of the two and hit some cracking boundaries.

The pair soon brought up their fifty partnership. England finally got a breakthrough when James Anderson got Warner for 38 in the penultimate over before stumps. Warner looked to dab a good length ball towards third man but got an outside edge to gully, where Crawley took a good diving catch in the front.

At 61/1 and trailing by 124 runs, Australia will fancy their chances of dominating the rest of the Test as well. 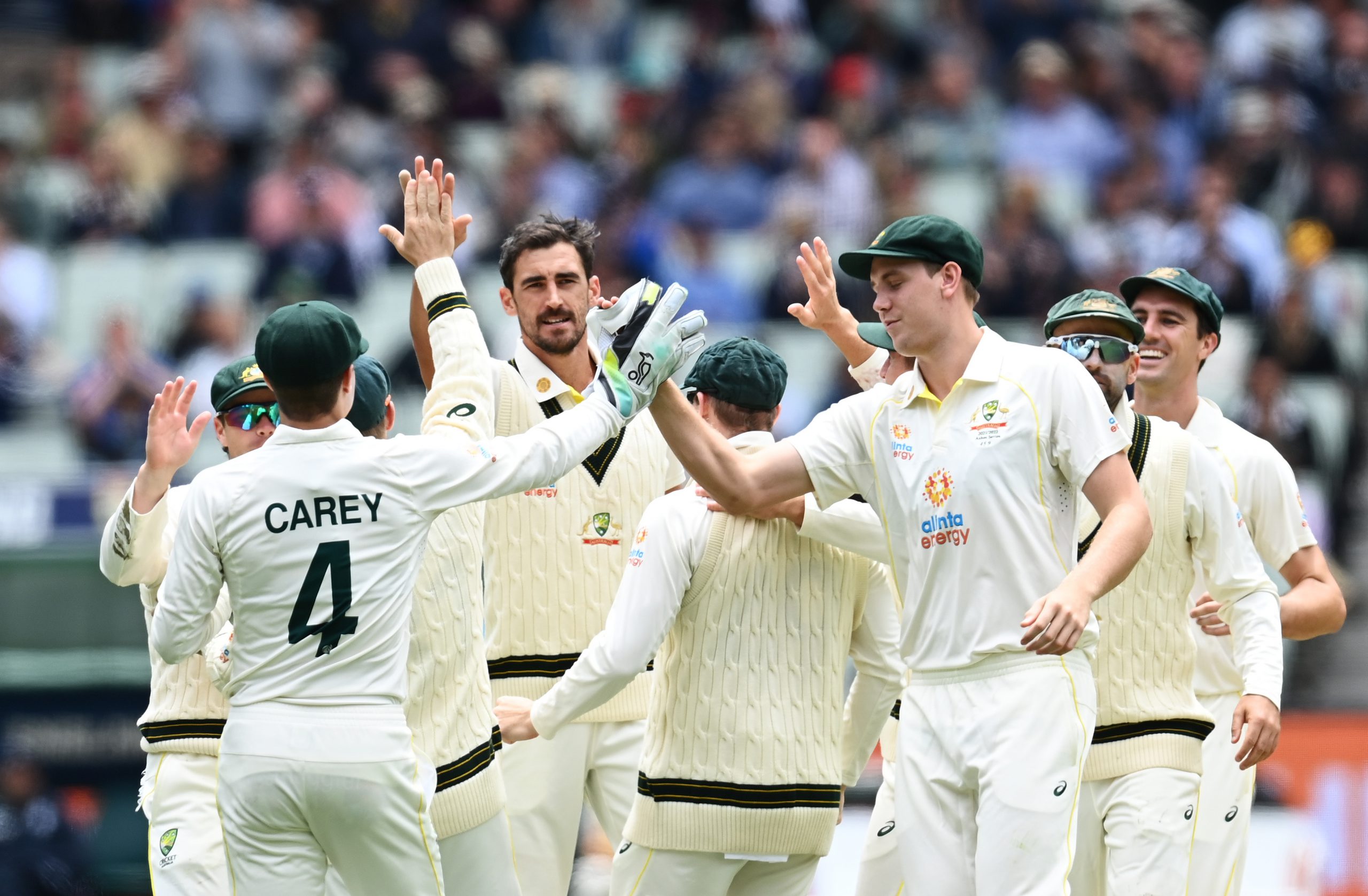