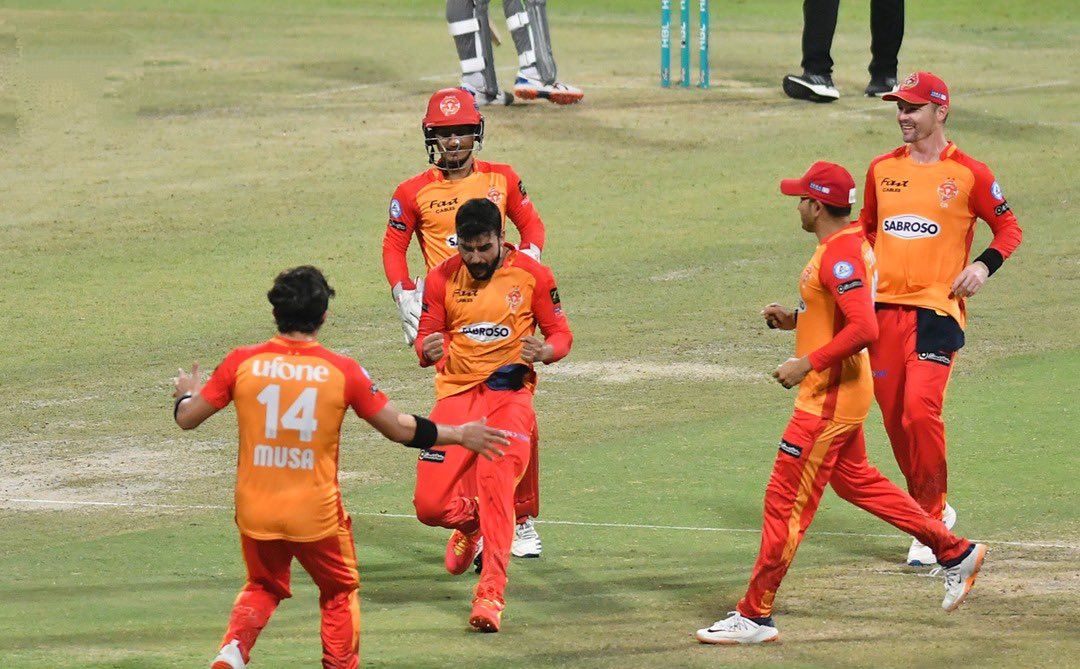 Abu Dhabi, June 13: An incredible 75 from Asif Ali followed by Muhammad Musa’s three for 18 handed Islamabad United a stunning 28-run victory over Lahore Qalandars in the 20th fixture of HBL Pakistan Super League 6 at Abu Dhabi’s Sheikh Zayed Cricket Stadium. This win propelled United – the champions of the 2016 and 2018 editions – at the top of points table.

Qalandars, chasing 153, were rolled out for 124 with 10 balls spare despite a solid start to their innings. The opening pair of Fakhar Zaman and Sohail Akhtar stroked a 55-run partnership that ended on the last ball of the powerplay when leg-spinner Fawad Ahmed trapped the latter in front of stumps.

Zeeshan Ashraf was run out five balls later after scoring just one but the run chase turned on its head in the 11th over when Musa dismissed Mohammad Hafeez with a short-pitched delivery.

Hafeez, in his attempt to pull the young pacer, handed an easy catch to Hussain Talat at deep square-leg which initiated a collapse of epic proportions as Qalandars slipped from 86 for two to 100 for nine. Musa dismissed Ben Dunk on the last ball of the same over and got the prized scalp of Fakhar, who with 44 off 37 promised to anchor the chase, in his next over.

With the pressure mounting on Qalandars, Tim David, fresh from his match-defining 64 not out against Peshawar Zalmi, hold out to deep midwicket off Shadab, who four balls later cleaned up Rashid Khan with a googly.

Haris Rauf promised a twist in the tale with two successive sixes off Mohammad Wasim Jnr but he was caught at deep midwicket by Iftikhar Ahmed in the penultimate over which ended Qalandars’ innings.

It was the 123-run alliance between Asif Ali, who posted his best HBL PSL score, and Iftikhar Ahmed that propelled Islamabad United to a respectable 152 for seven.

United had lost as many as five wickets for just 20 runs as Qalandars’ pacers once again provided their team a perfect start. Shaheen Shah Afridi’s scorching pace combined with lethal swing sent Usman Khawaja packing on the third ball. The left-arm pacer would have picked two wickets in two balls when his searing in-swinging yorker landed on right-handed Rohail Nazir’s front pad right in front of the off-stump. The umpire gave out Rohail, but the review showed that the bowler stepped over the line.

Rohail, however, had to walk back to the pavilion in the next over as James Faulkner’s impressive form with the new ball continued. In the fourth over, the Australian quick dismissed Colin Munro – for the second time in five days – with a delivery that nipped back into the left-hander and Hussain Talat became his next victim when he flicked the penultimate ball of the powerplay into the hands of Tim David, stationed at square-leg.

United were 20 for four after six overs.

Their start to the middle-phase of the innings was far from perfect as Shadab Khan was caught behind off Haris Rauf. As Qalandars seemed to be on their course to roll out United for a small total, Asif and Iftikhar staged an epic recovery with the former being a central figure.

The very first signs of what was on the cards for the United supporters came on the last two balls of the ninth over as Asif smashed Haris for two fours. He then smoked Ahmed Daniyal, the most expensive bowler from the Qalandars camp whose four overs leaked a staggering 46 runs, for a massive six over long-on and then struck Rashid Khan, who with a five-wicket haul set a stunning win for Qalandars over Zalmi in the last match, for a gigantic six over midwicket. Asif blunted the Afghanistan leg-spinner’s threat and made sure he remained wicket-less in his four overs.

Asif, from that point, did not look back and dispatched Qalandars’ bowlers for boundaries regularly. He struck five sixes and six fours in his defiant 43-ball 75. The Qalandars failed to remove him and his stay at the crease only ended when his leg disturbed the stumps as he pulled Shaheen in the 19th over.

Iftikhar, who scored 49 off 37, duly supported him. He struck six boundaries before he holed out to long-off in the penultimate ball of the innings.

Only two batsmen from United – Asif and Iftikhar – and three from Qalandars – Fakhar, Sohail and Rauf – scored in double figures.

This match marked the first instance of United opting to bat after winning the toss in the history of the HBL PSL.