Babar Azam does not want to be compared to Kohli

Babar Azam came back with the perfect reply when a fan asked him how he felt about being the “Virat Kohli of Pakistan,” on Sunday, during a question and answer session on Twitter.

The fan asked Azam how he would feel about being called Pakistan’s Virat Kohli:

Azam did not keep the fan waiting and said: “There is no comparison. Virat Kohli is a great batsman and I am just a beginner. But I would like to be recalled as [the] Babar Azam of Pakistan.” 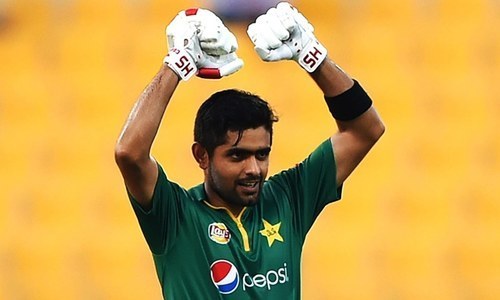 The twitter fan was not the first one to compare Azam to Kohli, “He [Azam] is a young gun who will be an exceptional player. I’ll go so far as to say, at the same age, I reckon he’s as good as Virat Kohli, which I know that’s high praise but he’s right up there,” coach Mickey Arthur told Perth’s 6PR radio. last year.

Lahori by birth, Babar Azam is known for his level-headed attitude at the crease. He evolved by performing from a young age, starting off his professional cricketing career by playing in the Under-15 World Championships in 2008 and slowly crawling his way up the order by representing Pakistan in the Under-19 World Cups of 2010 and 2012.

After making a name as a consistent top-scorer in age-restricted national events, Babar was called up to represent the green shirts in a home ODI series against Zimbabwe, allowing him to make his international debut on the home ground amidst Pakistan’s isolation as an international cricketing venue.

The 22-year-old right handed batsman broke into the Top 10 ODI batsmen ICC Player Rankings, jumping 5 places to reach the 10th spot, when he racked up 100 runs in Adelaide during January’s ODI series against Australia, in which he scored a total of 282 runs on January 27.

Heading into the Champions Trophy, Babar was already reckoned as someone who had the ability to stabilise Pakistan’s shaky middle-order.

The high expectations accompanying him meant his ’50-less’ Champions Trophy run disappointed some fans and critics at home. However, Babar’s top score during the tournament came in the crucial final, where he scored 46 before getting caught as a result of a miscued slog off Jadhav’s delivery.

In spite of his poorer-than-expected performance in the tournament, Babar still averages over 50 in his 31 ODI appearances and has leapfrogged several spots to reach a career-best fifth place on the ICC’s ODI Batsmen Rankings.

Owing to his relatively young age, Babar looks set to be a regular on the Pakistani side for at least the upcoming decade.