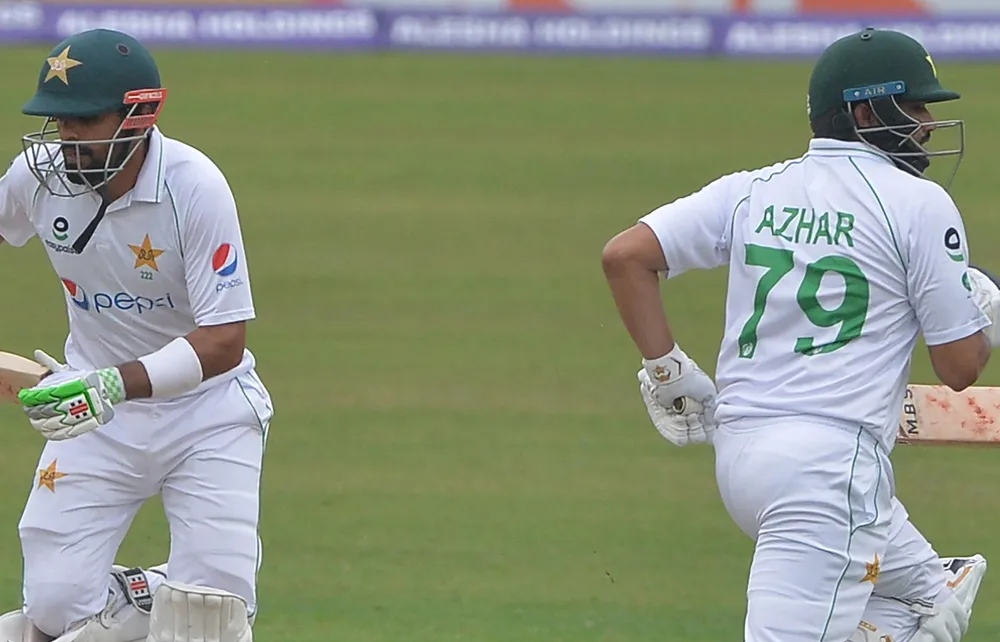 Dhaka, December 4: Pakistan ended the opening day of their second Test against Bangladesh at 161/2, with bad light forcing abandonment of the final session in Dhaka. Babar Azam , the captain, had scored a breezy 60* by stumps, and was accompanied by Azhar Ali (36*) when the umpires decided that stumps had to be drawn.

Pakistan opted to bat and had gotten off to a good start, with Abid Ali and Abdullah Shafique putting on 59 runs for the first wicket. The duo was untroubled by the Bangladesh pacers, with Ebadot Hossain and Khaled Ahmed struggling to threaten the duo.

Abid and Shafique brought up a 50-run partnership after a solid first hour, but the momentum slowly dried up when spin was introduced. The pressure yielded wickets, with Shafique being cleaned up by Taijul Islam, the left-arm spinner, for a 50-ball 25.

Abid didn’t last much longer – Taijul skidded one through, and Abid was cramped, chopping on for an 81-ball 39. Bangladesh had regained momentum, and the two new batters, Azam and Azhar, were under the pump. The duo held on till Lunch, but the first hour of the second session was a grind as well.

They held firm under overcast skies, but after a brief rain break, the tables turned. Azam was more fluent thereafter, and the momentum seemed to have been drained from the Bangladesh bowlers.

Azam played his shots – he was fortunate to be dropped by Khaled Ahmed in the deep – and Azhar used the sweep a couple of times as Pakistan broke free from Bangladesh’s shackles. They were just gaining a grip on the innings when the clouds regathered around tea.

The light was deemed insufficient for play to continue for the day, and Bangladesh will hope for a better start to the second morning.