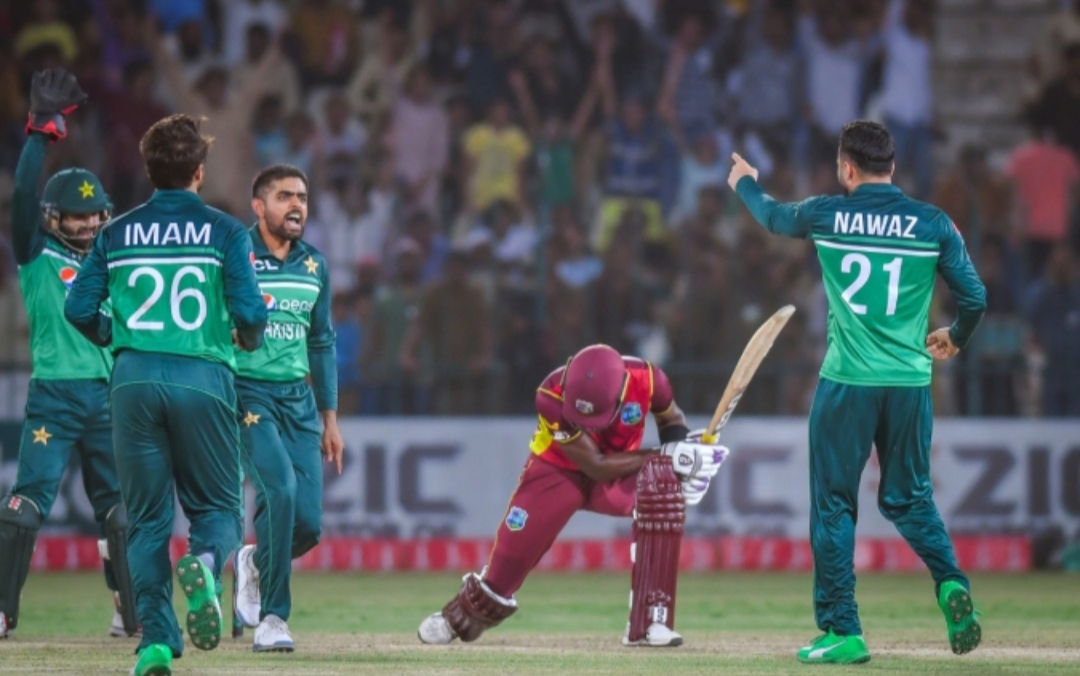 The win lifted Pakistan from the pre-series 10th position to fourth spot. They are on equal points with the West Indies on 80, but are placed ahead of the two-time former world champions on net run-rate.

This was Nawaz’s second career four-fer in 18 appearances after he had taken four for 42 against the same opposition in Sharjah in September 2016. Nawaz’s scalps included Shamarah Brooks (42), Brandon King (0), Nicholas Pooran (25) and Rovman Powell (10).

Shaheen Shah Afridi, as he often does, provided a breakthrough in his first over when he dismissed last match’s centurion Shai Hope (4). But Brooks and Kyle Mayers repaired the damage with 67 runs second-wicket partnership.

Mayers was ruthless on Pakistan’s fast bowlers, punishing them for four fours and two sixes in a 25-ball 33 before Mohammad Wasim disturbed the furniture behind the left-hander. Wasim finished with figures of three for 34.

Nawaz got into action and claimed four straight wickets before Shadab Khan joined in the fun when he dismissed Romario Shepherd as the West Indies lost their last seven wickets for 83 runs to capsize for 155 without offering a real fight.

Shadab added the wicket of Hayden Walsh to finish with two for 40.

Earlier, Pakistan won the toss and elected to bat first. Fakhar Zaman suffered his second successive failure when he was dismissed for a 28-ball 17 but Imam-ul-Haq and Babar Azam stitched a 120-run second wicket partnership that proved to the cornerstone of Pakistan’s 275 for eight.

Imam scored run-a-ball 72 with six fours before his innings concluded after his mate Babar preferred to look at the ball instead of his partner that stunned the left-hander and left him stranded at the middle of the pitch.

This was Imam’s sixth consecutive half-century after he had scored 56 (against England), 103, 106, 89 not out (all against Australia) and 65 (against the West Indies on Friday).

Babar Azam, whose previous five scores were 158, 57, 114, 105 not out, 103, was on course for a fourth successive century but was beaten in the flight off Akeal Hosein and was caught and bowled by the left-arm spinner. Babar scored a 93-ball 77 that included five fours and a six.

Babar’s dismissal produced three wickets of Mohammad Rizwan (15), Mohammad Haris (6) and Mohammad Nawaz (3) for the West Indies. However, small contributions by Shadab Khan (22), Khushdil Shah (22), Mohammad Wasim (17 not out) and Shaheen Shah Afridi (15 not out) propelled Pakistan to reach a position from where they could dictate terms.

Pakistan collected 27 runs in the last two overs, including 12 off the penultimate over by Anderson Phillip and 15 off the final over of the innings by Romario Shepherd that included three fours by Shaheen Shah Afridi.

For the West Indies, Hosein was the pick of the bowlers with three for 52, while Alzarri Joseph and Phillip equally shared four wickets between them conceding 33 and 50 runs, respectively.

The third and final ODI of the series will be played on Sunday.