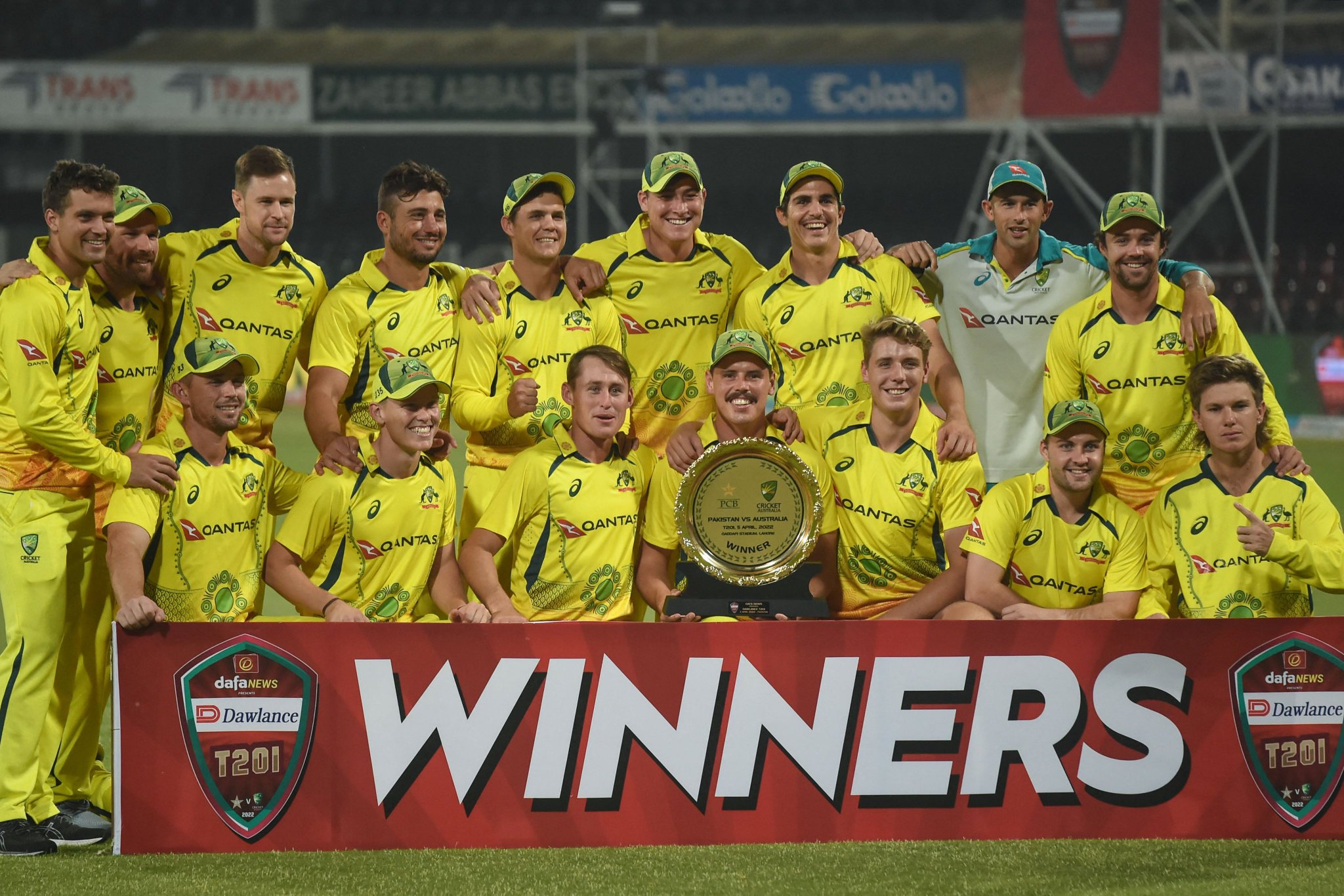 Lahore, April 6: Australia ended their tour of Pakistan on a high with victory in the one-off T20I in Lahore.

In a repeat of November’s dramatic ICC T20I World Cup semi-final, it was Pakistan who again batted first. And they got off to a flier thanks to captain Babar Azam’s classy 66 – a knock that saw him equal Rohit Sharma on 26 T20I half-centuries, tied for second on the all-time list.

But Australia pegged Pakistan back, with Nathan Ellis picking up four wickets for 28 runs in only his third T20I appearance for his country. And the reigning T20I World Cup champions seemed to have the target well within reach for the majority of their reply.

Captain Aaron Finch top-scored with 55, while there were useful cameos from Travis Head (26), Josh Inglis (24), Marcus Stoinis (23) and Ben McDermott (22) as Australia wrapped up the win with three wickets and five balls to spare.

Victory in the one-off T20I sees Australia end with a white-ball triumph to add to their Test series win, with the hosts having to settle for their ODI series trophy at the end of a high-quality month of international cricket in Pakistan.

Having been put in to bat by the tourists, Pakistan got off to a flier as the opening batters put on 56 runs in the Powerplay, strengthening their status as one of the most feared top-order pairs in the game.

Stopping Babar and Mohammad Rizwan – who are ranked first and second respectively in the ICC T20I Batting Rankings – was the key task for Australia with the ball, and they got the breakthrough they were desperately seeking when Cameron Green cleaned up the wicketkeeper-batter for 23.

And the Aussie all-rounder struck again off his very next ball, with Fakhar Zaman plinking a full toss straight to Finch.

Pakistan stuttered through the middle overs after such a flowing start, with Iftikhar Ahmed (13 from 13) and Khushdil Shah (24 from 21) struggling to unleash.

But as long as Babar was out in the middle a decent score always looked possible, and the Pakistan skipper registered the 26th T20I half-century of his remarkable career. Only Virat Kohli now has more T20I 50s (30) than the Pakistan star.

But Babar’s fluent knock came to an abrupt end when he picked out Adam Zampa in the deep to hand Ellis his second wicket of the night, with the Pakistan opener finishing on 66 from 46 deliveries.

And the wickets tumbled in the final five overs, as Pakistan struggled to make the most of the platform set by their top two.

Another set of two wickets in two balls, this time for Ellis, saw the inexperienced right-armer finish with impressive figures of 4/28.

Australia’s chase got off to a terrific start as the openers made it through Shaheen Shah Afridi’s opening spell without the strike bowler picking up his customary Powerplay wicket, with 14 runs coming off his opening over.

And the tourists stayed well ahead of the required rate as they looked in control of the chase throughout.

Five boundaries in a nine-ball stay in the middle from Stoinis saw the run rate increase even further, with the power-hitter smashing 23 runs in his sparkling cameo.

The scoring rate slowed as the finish grew closer, with Australia knowing they were well on top as long as wickets remained in hand.

And captain Finch reached his half-century as the target approached, bringing up his 50 off his 37th ball.

The skipper didn’t quite make it through to the target, with Afridi picking up Finch and Sean Abbot (0) in a 19th over that ensured that the match made it to the last.

But McDermott flicked a four off his pads from the first ball of the final over to see Australia wrap up the win with five balls to spare and with three wickets still remaining, bringing the curtain down on a terrific tour.