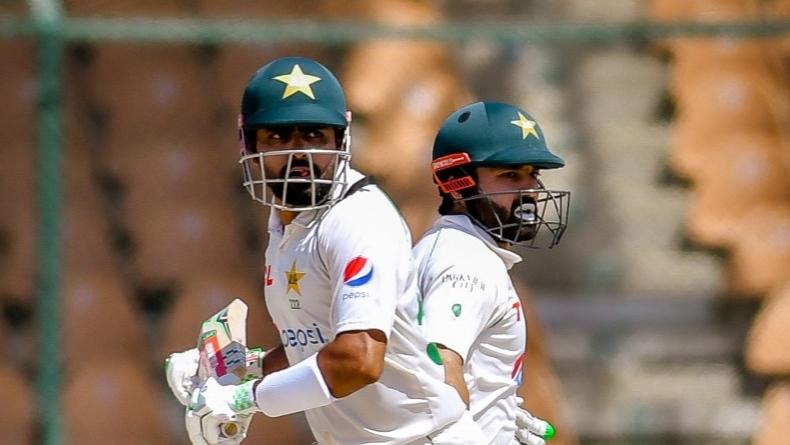 Babar Azam’s 196 against Australia in Karachi

Babar Azam’s epic knock of 196 runs against Australia in the second Test in Karachi was one to remember. With a two-day survival task and a fourth-innings target of 506, Pakistan’s chances of victory always looked slim. However, in the fourth innings, Babar batted for 603 minutes and faced 425 balls, helping Pakistan save the Test.

He soaked up all the pressure and handled the Australian bowlers with ease. During his innings, he built some solid partnerships with Abdullah Shafique (228 runs) and Mohammad Rizwan (115 runs), allowing Pakistan to survive 171.4 overs and remarkably draw the second Test, keeping the series alive. The knock also helped him win the ICC Player of the Month Award for March 2022.

Mohammad Rizwan’s 104* against Australia in Karachi

Although Babar Azam scored 196 runs in the second Test in Karachi, Mohammad Rizwan’s unbeaten 104 was of equal importance. Pakistan were never actively chasing the target of 506, but the task for them was to survive two days. In the fourth innings, Rizwan put on a 115-run partnership with Babar to keep Pakistan’s fight alive.

Pakistan had a mini-collapse after Babar’s wicket, but Rizwan fought on and reached his century off the last delivery of the penultimate over. He then batted through along with the tailenders to clinch a draw.

Kraigg Brathwaite’s 160 and 56* against England in Barbados

Kraigg Brathwaite played the knock of his career when he scored 160 against England in the second Test in Barbados. After England declared their first innings at 507/9, West Indies scored 411 runs in response, thanks to Brathwaite’s marathon knock in which he played 489 deliveries. The visitors in their second innings declared at 185/6, setting up a target of 281 runs for West Indies.

In response, West Indies were unable to respond well, and victory appeared to be in England’s hands. However, skipper Brathwaite halted England’s drive for a win with another resolute batting display and made 56* in 184 balls, with the second Test ending in a draw. Throughout the match, Brathwaite faced 673 balls – the most by a West Indies batter in a Test match, eclipsing Brian Lara’s record of playing 582 deliveries against the same opponent in 2004.

Rachin Ravindra’s 18* against India in Kanpur

Rachin Ravindra’s knock of 18* in 91 deliveries was not a big score by any means but was of vital importance for New Zealand. Defending a target of 284 in the opening Test in Kanpur, the Indian spinners had almost found a way past New Zealand’s batting lineup, but the debutant Ravindra had other ideas.

In the second innings, he showcased his quality with his defensive technique and footwork and remained unbeaten against a quality Indian spin attack. He batted 91 deliveries and remained not out with Ajaz Patel for the last wicket, helping New Zealand pull off a great escape.