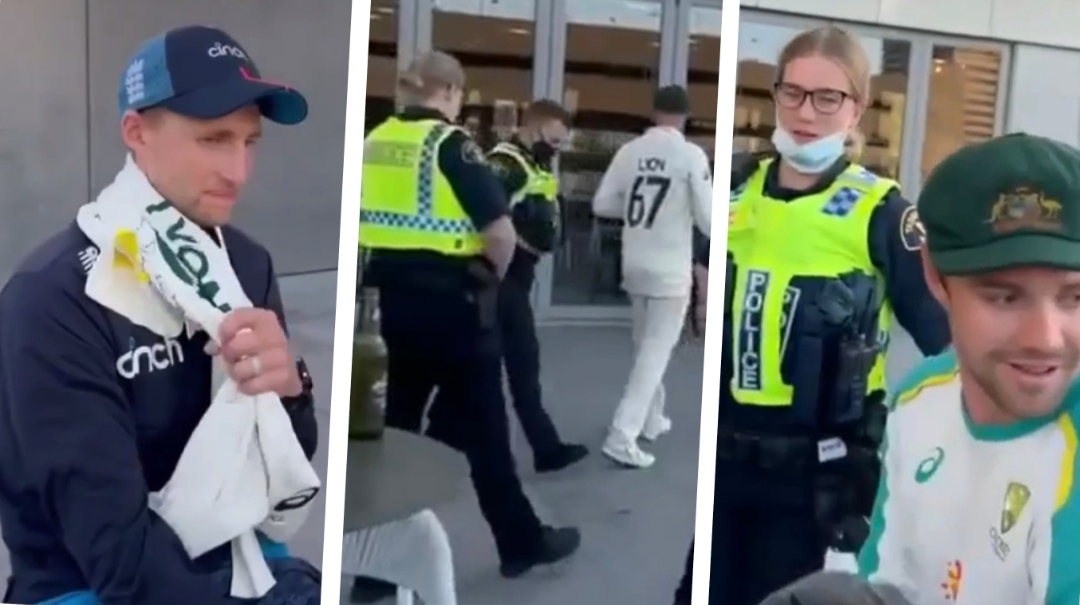 Srinagar, January 18: For all night Ashes Booz party, Police had to be called and they kicked out Australia and England cricket stars out of the hotel in Hobart.

Video surfaced on Internet in which Police are seen having broken up Ashes celebrations involving Australian and English players at the Australian team’s hotel in Hobart.

Four police officers and hotel staff can be heard telling players Nathan Lyon, Joe Root, Alex Carey, James Anderson and Travis Head they “were a bit too loud” as the bemused players sit around a table after a night of celebrations, some still in their playing whites.

“You’ve obviously been asked to pack up… we’ve been asked to come,” a female officer can be heard telling the players, who can then be seen leaving the balcony.

There have been no allegations of bad behaviour surrounding the night out, after a series in which both teams have been praised for their sportsmanship.

“Tasmania Police attended the Crowne Plaza Hobart on Monday morning after reports were made of intoxicated people in a function area,” Police has said in a Statement.

“The guests were spoken to by police just after 6am and left the area when asked. No further action will be taken by police,” They added.

The England and Wales cricket board have launched investigation into the incident.

“During the early hours of Monday morning, members of the England and Australia men’s teams shared a drink in the team areas of the hotel in Hobart,” the ECB statement said.

“The hotel management received a noise complaint by a hotel guest, and as is commonplace in Australia, the local police attended the scene.

“When asked to leave by hotel management and the Tasmanian police, the players and management in question left and returned to their respective hotel rooms. The England party have apologised for any inconvenience caused.

“The ECB will investigate further. Until such times, we will make no further comment.”

Australian skipper Pat Cummins told News Corp: “We stayed in the changerooms for a little bit and caught up with English side for a couple of beers back at the hotel, so that was good as it was a hard-fought series between both teams so it was good to catch up with them after that.”

The video was filmed by a man heard saying: “Just video this, just for the lawyers. Bedtime”.