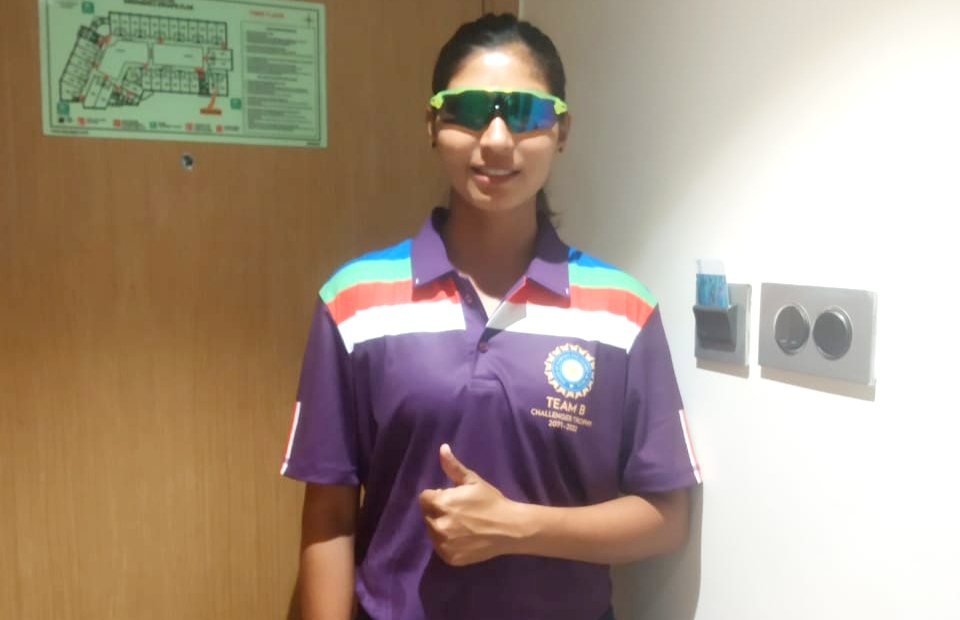 Sarla struck early in her very first over of the innings, getting rid of opening batter/wicketkeeper Indrani Roy for just 1 run and G Divya for nought (0) on third and fifth deliveries of her first over and the team’s second over, with the score reading 10/2 in 1.5 overs, putting the rival team in troubling waters.

However, India-D’s opening batter, S Meghana overwhelmed India-B bowlers with her swashbuckling ton (102 off 86 balls) to take her side to a good total of 230 runs in 48.5 overs. Meghana was in sublime touch and toyed with almost all India-B bowlers, hitting them with utmost ease and comfort through all parts of the ground. Ayushi Soni (48 off 75 balls) was the other major contributor. The duo of Meghana and Ayushi made a partnership of 106 runs, before Ayushi was dismissed at the team’s total of 1344 runs in 24.4 overs. K Pratyoosha (20), Saika Ishaque (14) and Kanika Ahuja (13) were the other batters to cross the double figure mark. For India-B, Sarla Devi, Rashi Kanojiya and Chandu V bagged 2 wickets each, while Meghna Singh, Harleen B Deol and G Trisha shared 1 wicket apiece.
Challenger Trophy being selection trials for picking Team India, the India-B skipper, Taniya Bhatia while providing chance to maximum players, used eight bowlers, so medium pacers Sarla and Meghna despite a fabulous bowling show were made to bowl just four and five overs respectively, conceding 24 runs each.

In reply, India-B managed to score 184 runs in 50 overs, losing all their wickets in the process, thus lost the match by 46 runs. Harleen B Deol, top scored with 73 runs off 86 balls, while H Kasi and G Trisha contributed 37 and 26 runs to the total respectively. Skipper Taniya Bhatia contributed 10 runs to the total. Sarla, who usually opens the innings for Jammu and Kashmir, used to accumulate runs with the pace of the ball, came in at an unusual slot at number-8 and failed to open her account. Skipper Pooja Vastrakar was the pick of the bowlers for India-D, who scalped 3 important wickets by conceding 37 runs in her 10 overs, while Keerthy K James and Kanika Ahuja bagged 2 wickets each. Amanjot Kaur also claimed one wicket.

It was India-B’s second outing in the tournament with one win and one loss.
In the next match, India-B will take on India-C on December 7 at the same venue.
Meanwhile, it is third time in the season that a J&K player was picked for the Playing XI in different Challengers Trophy matches.