0 January 5, 2018 10:46 am
Harbhajan Singh opens up on Misbah ul Haq hitting three sixes of him in World T20 2007
I know when to retire, it’s my choice: Mohammad Hafeez
Earlier MS Dhoni used to control bowlers, started to trust them from 2013, says Irfan Pathan

WELLINGTON: A fresh, covered pitch, a chilly southerly and some well-directed short-pitched bowling look set to provide Pakistan a real welcome to New Zealand on Saturday.

One of world cricket’s form teams, amid a One-day International winning streak of nine including the memorable ICC Champions Trophy final against India in June, Pakistan’s arrival in Wellington coincides with the storm lashing the country.

Outdoor training may be stretch for either side on Friday, given the dire forecast, but game day is predicted to clear and buffet the players with fresh southerly winds and a maximum of 18 degrees centigrade.

It’s a far cry from the warm welcome Pakistan got in Nelson on Wednesday for their solitary warm-up game as they relished the flat pitch and friendly New Zealand XI bowling attack to lash 341-9, including centuries to openers Fakhar Zaman and Azhar Ali.

With the Basin Reserve one of the quicker surfaces in the country, New Zealand’s pace attack of Tim Southee, Trent Boult and, most likely, speedster Lockie Ferguson, are sure to test out Fakhar, Azhar and Babar Azam — the world’s fourth-ranked ODI batsman — on the back foot early.

“Against any side you’ve got to use bouncer wisely and if you bowl good ones then that helps. It’s certainly not a matter of a bouncer barrage, it’s just a matter of using it wisely and what you follow it up with is equally important,” New Zealand coach Mike Hesson said.

“Both sides have got some genuine quicks and I’m pretty sure there will be some good grass on it [pitch] with the forecast.”

Pakistan’s nine-match winning streak spanned the Champions Trophy in England, and a 5-0 sweep of Sri Lanka on the slower surfaces of the United Arab Emirates.

In New Zealand they’ve lost their last five completed ODIs to the Black Caps, stretching back to February 2011 after the tourists won that series 3-2.

On their most recent tour two years ago, the Black Caps posted 280-8 in the first ODI at the Basin then skittled Pakistan for 210 with Boult taking 4-40. That match also saw Mitchell McClenaghan suffer facial fractures after he was struck by a bouncer from Anwar Ali.

New Zealand’s batting line-up, headed by dynamic duo of Colin Munro and Martin Guptill, are also set for a much sterner exam than the errant West Indies provided.

“They’re as good a bowling attack as there is going around in world cricket at the moment. Certainly very var­ied; they’ve got wrist spin­ners, finger spinners, and left and right arm quicks. They’ve got some very good performers and from a batting point of view they’re experienced,” Hesson said.

Hesson ruled out playing all four of his quicks — with Matt Henry also in the squad — despite the absence of pace bowling all-rounders Doug Bracewell and Colin de Grandhomme.

Bracewell, who took 4-55 against West Indies in Whangarei in his first international in 14 months, suffered a hamstring strain while fielding in the third Twenty20 International Mount Maunganui on Wednesday.

He was replaced by fellow Central Stag George Worker in the 13-man squad and Hesson said Bracewell was unlikely to feature in the five-match ODI series.

“It doesn’t look like a short-term injury, unfortunately. Hopefully we’ll get Colin de Grandhomme back at some stage and that’ll change the balance a little bit. With the two spin bowling all-rounders [Mitchell Santner and Todd Astle] that help fill a void there,” Hesson added.

“Doug’s worked really hard to make it back into the side after a pretty serious injury last year and he’s impressed in the opportunities he’s had. We know he’s a hard trainer and back him to rehab well and be available for selection in the not too distant future.”

De Grandhomme retur­ned to Zimbabwe last month for his father’s funeral and is expected back on Sunday for Auckland in their T20 match against the Knights. 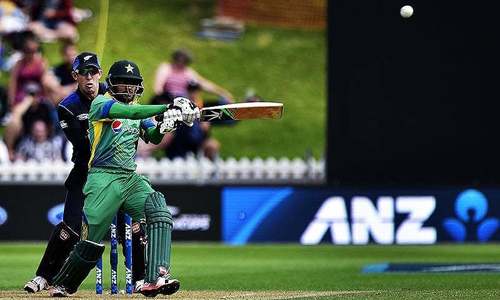