COMMENT: Pakistan cricket must constantly rage against dying of the light

ON rare days our spirits soar above the humdrum. Is it cricket, the sport, that does this to us? What’s to love in the bestial thrash of willow on leather, the brutal crash of leather into stakes of wood? What’s to savour in a tally of runs and wickets? No, it may not be the cricket.

Ask a German or a Brazilian, representatives of great sporting nations, about cricket, and you will bemuse them and stupefy them. What is this sport beloved of madmen and Englishmen played out in the midday sun?

Cricket, like any pastime taken in isolation, is meaningless. For sport is only relevant to us when we attach our emotions to it. 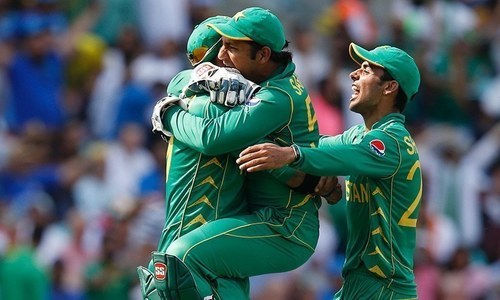 A football fan lives the agony and ecstasy of every goal. A boxing bout only excites us when we side with one of the fighters. International cricket is this and something more. It is intertwined with history and national identity. Cricket is us, and we are cricket – and perhaps it is more this way for Pakistan than for any other country?

The socio-political roots of cricket are deep. From the fall of the British Empire to the emergence of the Commonwealth, from the division of South Asia to the solidarity of the West Indies, from the destruction of South Africa’s Apartheid to the political wall between India and Pakistan, cricket is a metaphor for the heartbeat of nations.

In Pakistan, with its place in the world, with its struggle to grow and prosper, with its battle with itself, with its burden of Imperialism and Partition, the heartbeat of cricket is as powerful as anywhere.

The greatest team in the history of cricket, West Indies in the 1970s and 1980s, was imbued with the political fire of the Black Power movement. The West Indies of Clive Lloyd and Vivian Richards were heroic ambassadors of their people’s aspirations.

So too the Pakistan of Imran Khan and Javed Mia­n­dad, a feuding band of cricketers united to make their country’s name in the world. So too, now, this Pakistan of glove-waving talisman Sarfraz Ahmed.

Written off in advance, and fairly so, this fledgling Pakistan produced one of sport’s greatest ever upsets to win this year’s Champions Trophy. Pakistan were underwhelming on paper.

They limped into the tournament as the lowest ranked team and honoured that ranking with a wounding defeat to India. That is when a certain magic took hold. Something unearthly shattered Pakistan’s decade-long veil of ordinariness.

The fight, the passion, the verve of Pakistan’s cricket returned. It took us back to the days of Pakistan making its name in cricket and the world with skill and heart and panache.

Each victory that followed was major. South Africa were the highest ranked team in the world. England were the hosts and favourites. India, the superpower of world cricket. Even Sri Lanka were capable enough and came closest to finishing Pakistan’s run. But when the mesmeric spell is cast, the passion and verve in symphony, a Pakistan team becomes unstoppable. The shame is that these surreal days are few, too sparse for a nation of such cricket talent.

Therein rests the challenge for Pakistan’s cricket board. How to turn these fleeting episodes into sustained success? It is a test that every Pakistan Cricket Board has thoroughly failed.

After Pakistan’s 1992 World Cup win, the stage seemed set. Victory was the culmination of decades of progress. The country was bursting with players of the highest class, especially bowlers.

What followed was a decade lit up by Pakistan’s most complete team. But it was a period that left a sense of unfulfilled potential. A team capable of winning every world cup for the rest of the decade won nothing more.

Since then, the World T20 victory in 2009 and now this Champions Trophy, offer no hint of permanence. Instead, this is Pakistan cricket briefly raging against the dying of the light. For the cardinal sin of Pakistan’s administrators is to view each success as a validation of their methods. This is the failing, the self-harming philosophy.

What we don’t need now is grandstanding from the people who run Pakistan cricket. We don’t want an attempt to gloss over the weaknesses in Pakistan’s cricket structure. We must not be reassured by self-congratulatory hot air.

Wise leaders will thank their good fortune, count their blessings for the glorious emergence of Fakhar Zaman and Hasan Ali, express relief at the resurrection of Mohammad Amir as a world-class bowler, and nourish the blossoming partnership of Mickey Arthur and Sarfraz Ahmed.

Wise leaders will be humble and far-sighted, since success in the Champions Trophy isn’t really down to some unseen magic or blessed enchantment. Pakistan got a little lucky. The short format coincided with their burst of thrilling form.

Pakistan worked hard behind the scenes, with improved coaching methods and clear game plans. The players were inspired, brilliant. But the work of Arthur’s staff and the players is almost an afterthought that will struggle to deliver sustained success when damage is still being done upstream.

Let’s be clear, the state of Pakistan cricket is the same sorry one that it was before the tournament began. It is a mess that the Pakistan Super League only partly clears up. Wise leaders will build a cricket structure that identifies, develops, and supports the cricket talent available in Pakistan.

Don’t be complacent. Don’t be fooled into thinking we already have a robust infrastructure in place. Don’t take success for granted.

Pakistan cricket must not go gentle into the night. It must constantly rage, rage against the dying of the light. For cricket is us, and we are cricket.