Srinagar, Mar 17, KNT: At a time when Government is spending millions on sports infrastructure, promoting sports and other activities in Kashmir Valley, the Gani Memorial Stadium situated right in the heart of the old Srinagar city’s Rajouri Kadal mocks at the indifference of the Government’s J&K Sports Council.

The waterlogged stadium where Jammu Kashmir State Sports Council (JKSSC) installed 8 poles of floodlights with an estimated cost of Rs 1.24 crore in July 2019 narrates a woeful tale. Majority of these flood lights have become defunct while no efforts are being made to drain the water from the stadium which is completely in shambles.

Locals told news agency Kashmir News Trust that they welcomed the recent visit of Secretary Sports Council Nuzhat Gul along with a team of Engineers to the stadium and hoped things will change for better but till date neither stagnated water has been drained nor garbage has been removed.

“It is stinky. We don’t enter into this stadium now. Heaps of garbage, water logging, and uneven field are some of the ‘salient’ features of this solitary Stadium that exists in old Srinagar city,” said a cricketer.

He said it is not the rain water only that gets accumulated in the stadium but the water flowing from adjacent drains also gets logged here. “The stadium lacks drainage system. It needs technical expertise to frame a strategy to drain the water from the sports ground in order to make it playable for local youth,” he suggested.

Players blame Sports Council authorities for the miserable condition of the Stadium.

“Players are suffering immensely. So many promises were made, but not fulfilled. No turf was made available. Flood lights installed in the stadium are mostly non-functional. A team of efficient and dedicated engineers can change the face of the stadium,” Manager Mehboob-ul-Alam Cricket Club and Captain Ghani Memorial Reds (cricket) told KNT.

Meanwhile, scores of youth mostly cricket lovers staged a protest outside SP College here in Srinagar urging upon authorities to complete the undergoing construction work at SP College Ground as early as possible. They said the college ground has been bulldozed to the extent that no sports activity is possible there. (KNT) 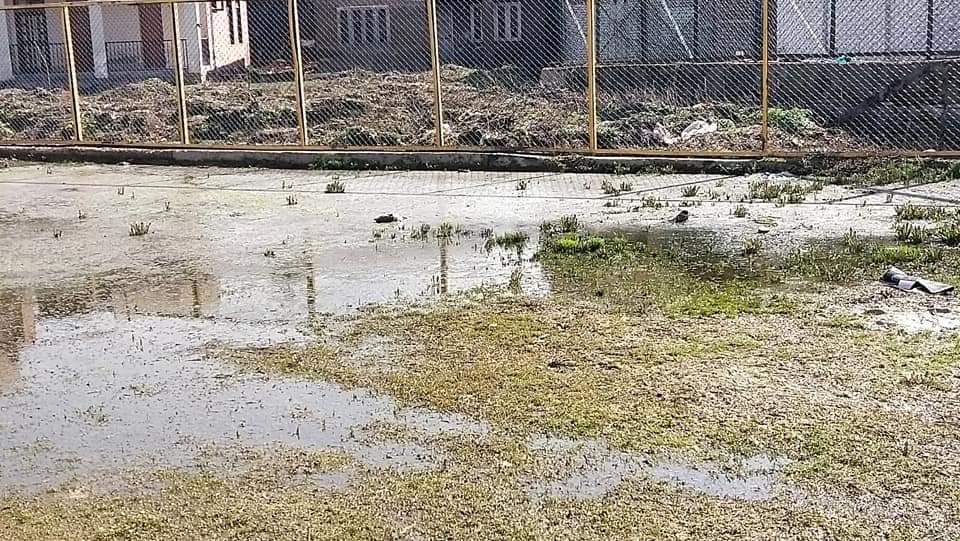