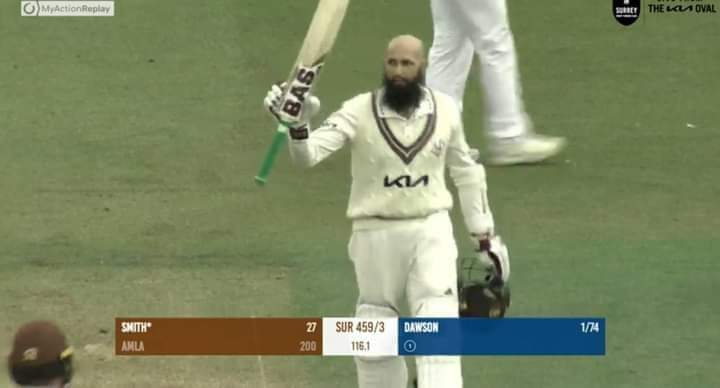 Srinagar, May 1: Rolling back the years , South Africa batting legend , Hashim Amla on Friday scored unbeaten 228 run knock for Surrey against Hampshire at The Oval in English County Championship .
In the process Amla also reached the mark of 18000 first class runs and also made record 3rd wicket partnership for Surrey with Ollie Pope.

It was Amla’s seventh first-class double hundred. At the end of the day Amla remained not out on 228 runs from 380 balls in which he hit 24 fours.

Amla, who retired from international cricket after the 2019 World Cup, anchored Surrey’s massive 513/3 after bowling out Hampshire for just 92 on the first day.

Amla and England batsman Ollie Pope (131) added 257 in 62 overs for the third wicket – a Surrey record against Hampshire at the Oval.

The 38-year-old turned back the clock at the same ground he struck his record-breaking 311 not out against England in 2012. Amla remains the only South African to score a Test triple century.