Cricket in Kashmir is now a rich man’s game

“Cricket is a gentleman’s game.” We all hear this line almost everyday. But what does the term gentleman mean? ‘Someone who’s polite, calm, humble, behaves well, etc, etc’ are usually the definitions we give. But is that all that it takes to play cricket these days?

Well, certainly not in Kashmir. From North to South and in the Centre, countless T20 leagues are taking place. Every new day, you hear about this and that Premier League. I don’t know whether they qualify to be called premier when it comes to quality of wickets or grounds, but they surely are premier in terms of fee they collect from teams.

5000 (five thousand rupees) is usually the lowest amount of money organisers ask teams to pay as participation fee and it goes as high as 2 lakh and more in some tournaments. In Kashmir, the teams are mostly self-financed, where each player contributes funds by himself. So, even to play in a local league in a not-so-standard ground, a player needs to pay an amount of 454 RS for one match (454.54×11=5000 appx), because 98% tournaments in Kashmir are played on knockout basis.

With unemployment at its peak in the Valley, can someone from a humble family afford to pay 454 RS for one match? Now, imagine if they would want to play in a so-called mega league, where the fee is mostly about 1 lakh per team! Can they even think of playing in that league in their dreams?

But then who cares? Cricket no longer is a gentleman’s game but of course the rich man’s game! Those who can pay, will play; this is the simple rule applied here. This is just about the participation fee, forget how expensive the equipment and other expenses are.

Now, you will say what would organisers do as they have to pay umpires, scorers and maintain ground, etc. That’s true. I’m not putting the whole onus on organisers, some of them are doing a great job. But I must say most of them are doing business in the name of cricket. Many of the tournaments in Kashmir never end. They keep going on and on for years. The final never takes place and where the amount that teams pay goes remains a mystery.

Then again, who cares? In Kashmir, there are so many other troubles that things like cricket rarely get any attention. No mainstream journalist would be interested in talking about cricket nor would anyone from administration care about what’s going on in Kashmir’s grounds.

However, the people who must think about all this are those working in sports bodies like the Jammu and Kashmir Cricket Association, J&K Sports Council, etc. How many events do they organise every year? This is hidden to none. There is rarely anything that can be said about their work because there’s absolutely nothing they’re doing, at least not that I’m aware of.

You all will now be thinking what’s the solution? Well, I won’t say that it all can be corrected in a day. It will surely take time but we have to step up now or things will worsen.

We must think about all those young kids and youth who desperately want to play but have zero opportunities. Private businesses need to sponsor teams’ participation fee, at least. JKCA, Sports Council must organise free of cost tournaments. And most importantly, our local organisers need to think about those who aren’t in the best shape financially while finalising the amount of money they acquire from teams. 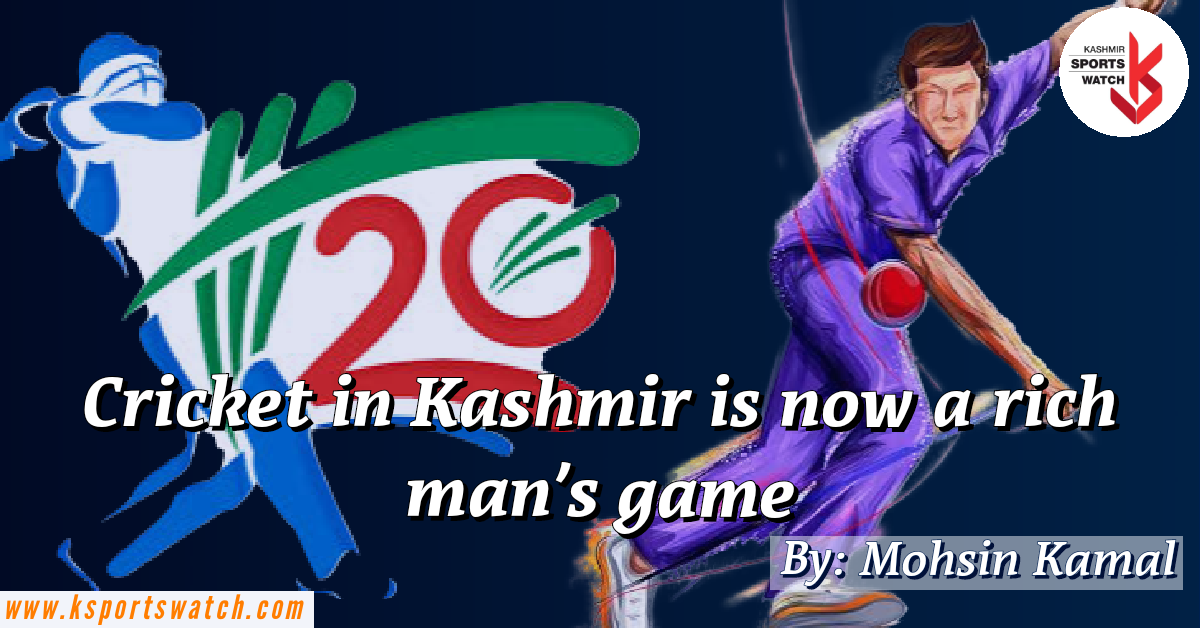