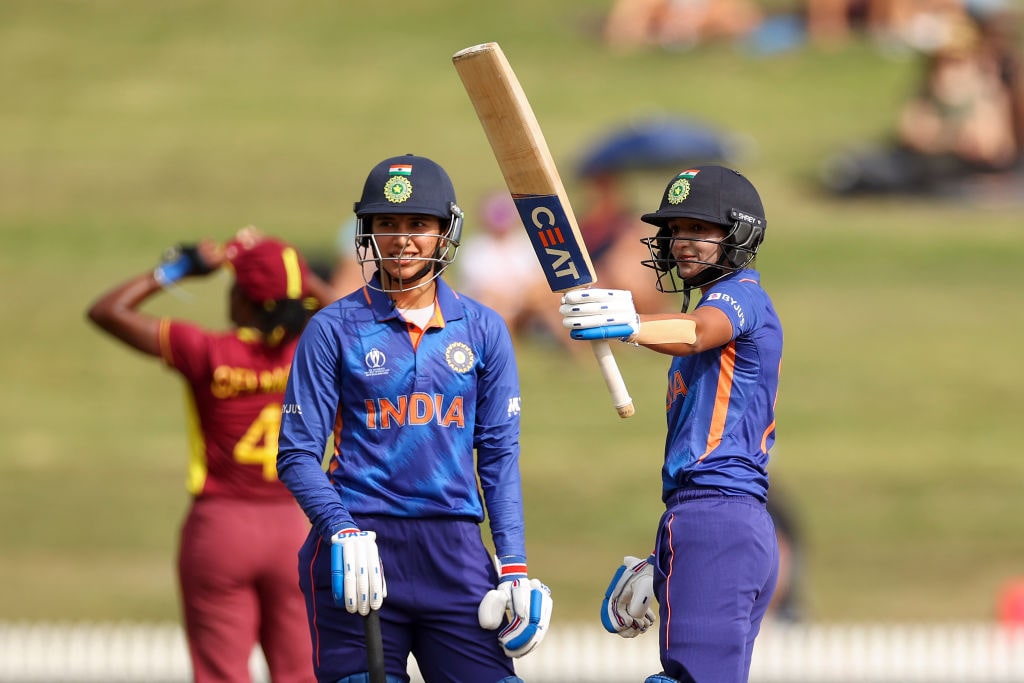 Hamilton, Mar 12: Superb centuries from Smriti Mandhana and Harmanpreet Kaur have helped India to a massive win by 155 runs in the ICC Women’s World Cup match against West Indies in Hamilton on Saturday.

After posting a massive total of 317/8 on the back of centuries from Smriti Mandhana and Harmanpreet Kaur, the bowlers came to the party to bundle West Indies out for 162.

The win takes India to the top of the ICC Women’s Cricket World Cup 2022 standings, with a 155-run victory providing a massive boost to their net run rate.

India would have been worried about the way Deandra Dottin was striking the ball in her quickfire 46-ball 62 but once she departed, the India bowlers kept the rest of the batting lineup in check.

With the task of chasing 318, West Indies needed a brisk start and that’s exactly what the openers delivered. An injured Dottin, who was facing severe back issues, played with nothing to lose and smashed the India bowlers to all parts.

She made her intentions clear by smashing four boundaries in the first three overs. Veteran pacer Jhulan Goswami was at the receiving end of the onslaught, as she conceded five boundaries. The spinners put a lid on the scoring for a couple of overs before Dottin took them on as well, bringing up her fifty in just 35 balls as Windies posted 81/0 at the end of the Powerplay.

The lifting of fielding restrictions had no effect on Dottin as she continued finding the boundaries. The introduction of Sneh Rana changed the fortunes as she snared the prized scalp of Dottin, whose attempted sweep went into the hands of short fine, sparking wild celebrations on the field.

Wickets continued to tumble thereafter as Meghna Singh and Rana picked three more wickets between themselves in four overs. Meghna picked up the wickets of Kycia Knight and Stafanie Taylor while Rana dismissed the set batter in Hayley Matthews.

With the required run rate touching seven, the pressure of run-scoring got the Windies batters. Looking for a boundary, Shemaine Campbelle smashed Pooja Vastrakar straight into the hands of Rajeshwari Gayakwad at point. Gayakwad then got in on the act in the next over, trapping Chinelle Henry in front.

Chedean Nation and Anisa Mohammed provided some resistance, batting out close to nine overs for 10 runs but once Mohammed fell, the rest fell soon. She was the 40th scalp of Jhulan Goswami, who surpassed the late Lyn Fullston to become the leading wicket-taker in ICC Women’s Cricket World Cup history.

India cleaned up the tail quickly as Windies were bundled out for 162.

Earlier in the day, Mandhana smashed 123 from 119 balls and Harmanpreet contributed 109 from just 107 deliveries as India amassed a huge total of 317/8 from their 50 overs at Seddon Park.

The duo was in a destructive mood throughout, with Mandhana in particular impressing as she hit 13 fours and two massive sixes during her scintillating knock.

Harmanpreet almost matched Mandhana’s efforts as she found the rope on 10 occasions and also cleared it twice in an innings that may have even matched that of her less-experienced teammate.

Mandhana actually started her innings cautiously, instead, allowing fellow opener Yastika Bhatia (31 off 21) to play the role of the aggressor as India found the boundary with ease to reach 58/2 through the first 10 overs.

But those two early wickets left Mandhana and Harmanpreet together at the crease and the pair combined to put on 184 for the fourth wicket and dominate a decent West Indies bowling outfit.

Their partnership was the highest by any Indian duo at a Women’s Cricket World Cup, beating Thirush Kamini and Punam Raut’s 175-run opening stand against the West Indies at the 2013 edition of the tournament.

There was no letup for the West Indies on this occasion either and, even when Mandhana fell to Shamilia Connell (1/57) in the 43rd over, Harmanpreet upped the ante to reach her own three-figure milestone.

Harmanpreet eventually did fall to Alleyne (1/26) in the penultimate over, but the damage was already done as the West Indies faced a massive task to remain unbeaten in this tournament.