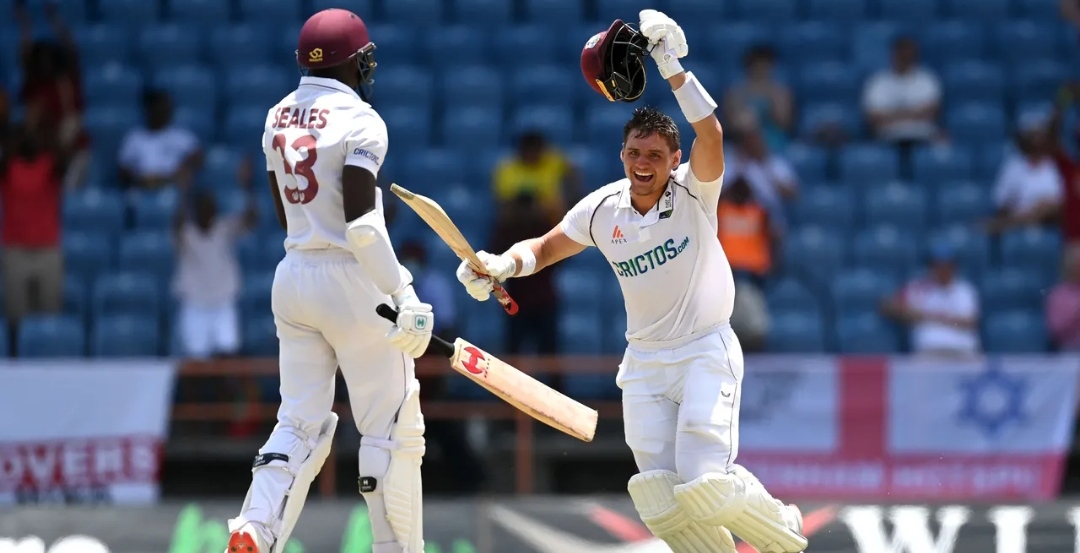 Da Silva’s first-ever hundred in Test cricket helped West Indies rack up 297 in the first-innings, with the wicketkeeper farming the strike throughout the morning session before reaching his ton just before lunch.

The 23-year-old wiped away tears as he celebrated his debut century with teammate and friend Jayden Seales out in the middle, and his outstanding rearguard effort helped give his team a 93-run first-innings lead.

And Mayers was the architect of a stunning bowling effort from the home side as England collapsed to 103/8, leaving them on the brink of another series defeat.

Joe Root’s side lead by only ten runs with Chris Woakes (9) and Jack Leach (1) out in the middle and just Saqib Mahmood to come.

West Indies had resumed with a lead of 28 on the third morning, and England’s chances of wrapping the innings up quickly looked good when Mahmood had Kemar Roach caught down the legside off a short ball, with Roach failing to add to his overnight score of 25.

But lower-order runs have been the theme of this Grenada Test, and – just like in England’s first innings – the partnerships for wickets nine and ten ended up yielding the most runs for West Indies.

Jayden Seales was the limpet that England just couldn’t budge, with the number eleven digging in as Da Silva looked to milk the strike.

And together the pair added 52 runs for the final wicket as England’s struggling attack toiled throughout the morning session.

The final runs of the morning and – as it turned out – the final runs of the innings, came from a punch down the ground by Da Silva to the long-on boundary. It was the very shot that brought up the wicketkeeper’s hundred, and the celebrations started with the ball barely halfway to the boundary.

An emotional Da Silva broke down in tears as he celebrated the milestone, his first ton in his 14th Test appearance for the West Indies.

There was to be a further talking point from an extended morning session, with Da Silva walking off for a nick behind off the very next delivery after he had reached his century, reviewing almost as an afterthought.

But replays showed that the ball had struck the thigh-pad rather than inside-edge, prompting the unusual sight of both batters and the entire fielding team returning to the field of play when the decision was overturned by DRS.

The innings and first session did come to a close in the next over when Seales chipped back to Joe Root for a 59-ball 13, with a still-moist-eyed Da Silva finishing unbeaten on 100*.

Da Silva’s brilliance meant that the last four West Indies wickets had contributed 202 runs to the total of 297, putting the hosts into an advantageous position in the match having looked vulnerable at 95/6.

Trailing by 93 runs, England set about their second innings after lunch. But any thoughts of overhauling the deficit and building a potentially match-winning score quickly evaporated, with Zak Crawley edging behind off an attempted booming drive in the fourth over.

And Mayers, as he had done in the first England innings, ripped through the top-order.

The all-rounder first picked up the crucial wicket of Root for another single-figure score (5), and the scalps of Dan Lawrence (0) and Ben Stokes (4) soon followed.

Mayers had returned first-spell figures of two wickets for zero runs from five overs in the first innings, and his second-innings effort was scarcely less impressive, with the 29-year-old going in at the tea interval having taken three for seven from seven overs to rip the heart out of the England batting line-up.

England were reeling on 43/4 at the break, still trailing by 50 runs.

An obdurate 148-ball partnership between opener Alex Lees and Jonny Bairstow threatened to take the sting out of the day as England looked to rebuild in the evening session.

But when Bairstow edged behind to Alzarri Joseph for 22 it sparked another mini-collapse.

Ben Foakes, just four balls into his knock, took on the arm of Mayers on the boundary and came off second best, run-out well short of his ground as he attempted a second run.

And Lees’ lengthy effort came to an end when the majestic Mayers struck again, cleaning him up for 31, with Root seen with his head in hands on the England balcony as another series defeat drew closer.

Mayers completed his five-for when he tempted Craig Overton into a rash shot outside off, edging straight to Jason Holder.

And West Indies were pushing hard for victory as play came to an end, with just two wickets of the England innings remaining and the lead at just ten runs.

A famous series victory is within reach for Kraigg Brathwaite’s side, although the story of the Test so far suggests that picking up the final two wickets cheaply will not be a foregone conclusion when the teams return on the fourth day.