Day 2: Pakistan unscathed after bowling Bangladesh out for 330 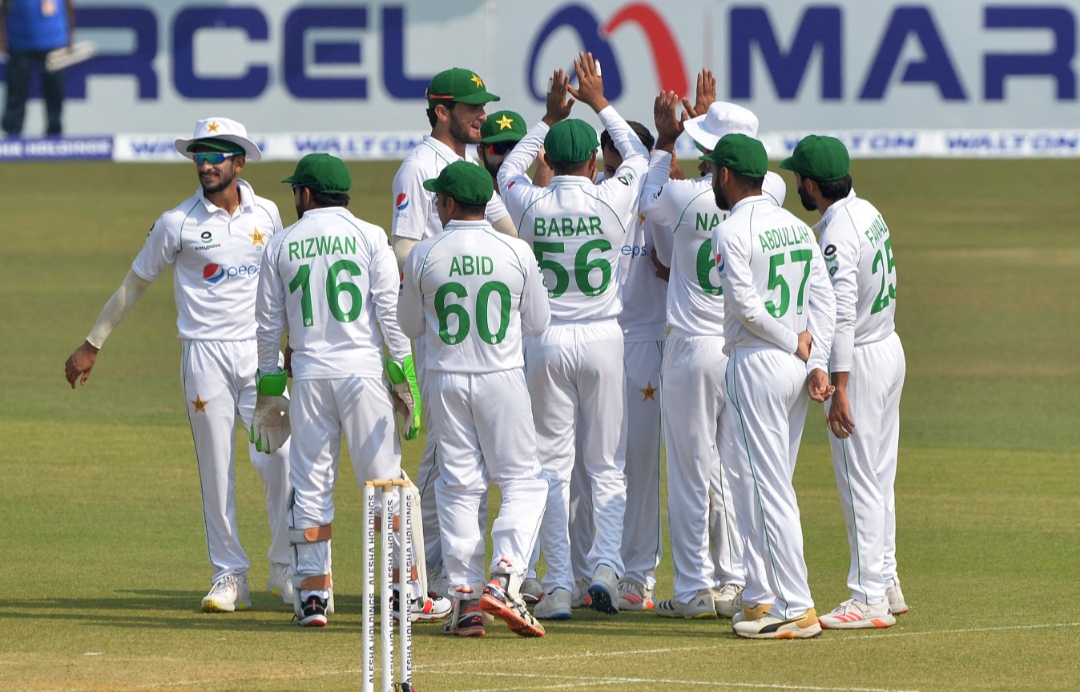 Chittagong, November 27: Pakistan finished day two on 145/0, trailing by 185 runs, after bowling Bangladesh out in the first session for 330.

Pakistan openers Abid Ali (93) and Abdullah Shafique (52) helped the visitors gain control of the match after their bowlers turned the tables around in the morning session with Hasan Ali finishing with his sixth five-wicket haul in Tests.

Just as day one, Bangladesh’s start of day two was not an auspicious one. The hero of day one, Liton, Das, who had scored a stunning maiden Test century was out in the second over – trapped in the front and reviewed successfully by Hasan Ali.

Linton’s wicket broke the massive 206-run fifth-wicket stand between him and Mushfiqur. Pakistan did not have to wait for long for the next wicket either as Hasan removed Yasir Ali just a few overs later, sneaking through the bat-pad gap and cracking into the middle and leg stump.

Although Mushfiqur tried hard to hold on, the runs had dried up with Pakistan bowlers maintaining the pressure with their tight lines and lengths. Faheem Ashraf finally removed Mushfqur right before the drinks break, the Bangladesh veteran missing his century by nine runs.

Mehidy Hasan tried to accelerate with a few lofty shots but he received little support from the other end. Taijul Islam (11) was removed by Shaheen Afridi and Hasan Ali soon wrapped up the innings dismissing Abu Jayed (8) and Ebadot Hossain (0) on back-to-back deliveries just before lunch.

Hassan finished with impressive figures of 5/51 with Mehidy stranded on 38* as Bangladesh were bowled out for 330.

In reply, Bangladesh bowlers failed to make an impact as the Pakistan openers continued unperturbed. Abid Ali showed his class while debutant Abdullah Shafique dropped anchor at the other end. At one point, he even managed to get a reprieve on 9 when he was trapped in front by Taijul but the appeal was turned down. Had Bangladesh reviewed, Shafique would have had to walk back.

As the host bowlers failed to apply pressure, Abid racked up his third Test fifty as Pakistan went to Tea unscathed at 79/0.

After Tea, the duo continued from where they had left off and kept the scoreboard ticking. The 100-run partnership came soon after as Abid punched through the off-side for a couple. He was the aggressor of the two, biding his time, pouncing on the loose deliveries and smashing the occasional boundary to keep up the pressure.

The Bangladesh bowlers failed to create any definitive chances after that initial LBW appeal against Shafique and looked thoroughly exhausted by the end.

Shafique brought up his maiden Test fifty with a six over the bowler’s head to the standing ovation of his teammates in the dressing room.

The play was eventually called off early due to bad light with Pakistan walking back happier of the two teams with 145/0 on board, trailing by 185 runs.