21-year-old Mohit Ahlawat became the first batsman in the world to score a 300 in a T20 match on Tuesday. While the match had no official status and was only a local match played in Delhi, Ahlawat’s knock was one was filled with superlatives and his triple century came in 72 balls. 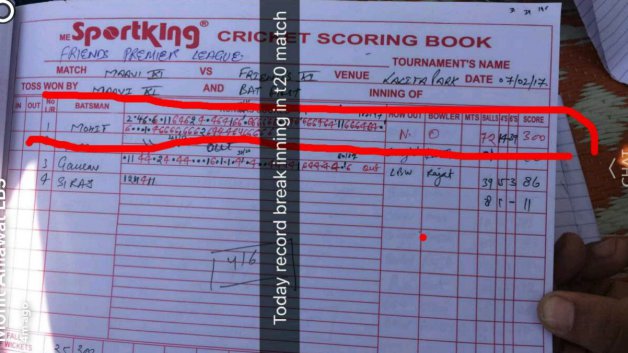 The Delhi wicketkeeper-batsman smashed a whopping 39 sixes and 14 boundaries on his way to the total. No player has ever crossed the 200-run-mark in international or domestic T20 matches. In professional cricket, the highest individual score in T20 cricket belongs to Chris Gayle, who made 175 runs in just 66 balls for Royal Challengers Bangalore. The highest individual in international cricket is 156 that Aaron Finch smashed in 63 balls for Australia against England.

‘Carnage’ was the oft used word to describe the two innings were described as and so, one can only imagine what Ahlawat’s innings would have looked like.   It is also interesting to note that no team has scored more than 300 runs in T20 cricket.

The highest score by a team in 20-over cricket is a record shared by IPL team Royal Challengers Bangalore and Australia. The two teams had managed 263.