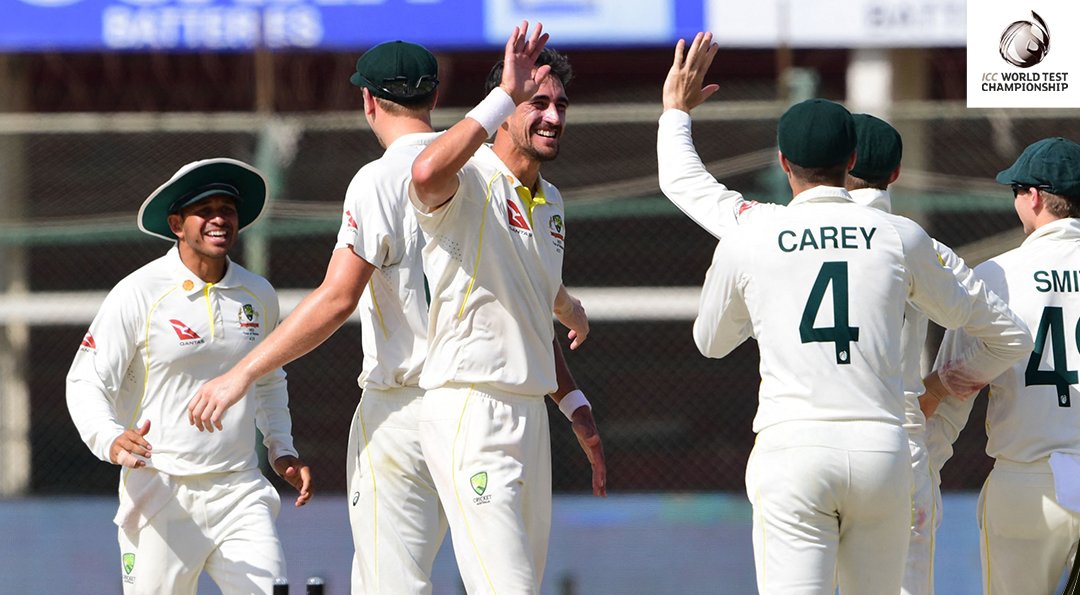 Karachi, March 14: It was Australia’s day in Karachi as their bowlers helped them wrest control with a disciplined performance before Marnus Labuschagne and Usman Khawaja extended their lead to 489.

Australia resumed the day on 505/8, adding some valuable runs in the first half-hour of the morning session before declaring on 556/9, courtesy of skipper Pat Cummins and debutant Mitchell Swepson’s unbeatable 51-run last-wicket partnership.

Earlier, Mitchell Starc failed to add to his handy knock of 28 as he was dismissed to the second ball of the day by Shaheen Afridi. Debutant Swepson came out to bat joining skipper Cummins at the crease, and the two batters continued to punish the Pakistani bowlers, with Cummins occasionally smashing the spinners for big sixes.

Swepson in his debut innings played a crucial knock of 15* as he made sure Australia didn’t lose the final wicket, while Cummins from the other end played an impressive 35* that included three sixes before declaring.

Pakistan’s response to the mammoth total of Australia got off to a shaky start. They lost their openers early, allowing the visitors to completely take control of the game.

Both Abdullah Shafique and Imam-ul-Haq, who made brilliant centuries in Rawalpindi Test, took their time to set their eyes in the middle.

Starc, in absence of his regular partner, Josh Hazlewood, started the opening spell with skipper Pat Cummins. Starc looked in a good rhythm and bowled some tight lengths to keep the Pakistani batters under control. Despite that, Imam and Shafique made it through the important first half-hour and had successfully navigated through the Australian pacers’ first stint.

They appeared to be on track for a fine opening partnership, but in the 14th over, the openers attempted a risky single, and a direct hit from debutant Swepson, standing at backward point, was enough to send Shafique back to the pavilion for 13. Experienced Azhar Ali came out to bat, and he ensured Pakistan did not lose any more wickets in the morning session as they went to lunch at 38/1, with Imam on 20* and Azhar on 13*.

Early in the second session, Imam played a risky shot and made an early exit. He went down the track against Nathan Lyon and ended up giving a catch straight into the hands of Cummins at mid-on. Azhar had got the afternoon session underway with a six, but a fuller-length delivery from Starc got the better of him, as the chip drive from Azhar went straight into the hands of the slip fielder, dismissing him on 14.

Fawad Alam followed Azhar back to the pavilion from the very next ball without bothering the scoreboard, as Starc reduced Pakistan to 60/4. New batter Mohammad Rizwan didn’t stick around long either. After being dropped by Smith in the slips, Cummins once again managed to get the outside the edge of his bat and this time wicketkeeper Alex Carey safely collected it to dismiss Rizwan on 6.

After losing half of their side on 76, Pakistan’s hopes of putting up a formidable response were completely shattered. On a pitch where the Australian batters dominated in the first innings, the Pakistan batters suffered in the afternoon session, with Starc and Cummins assisted by a lot of reverse swing.

While Pakistan’s batters continued to lose their wickets from one end, skipper Babar Azam stood firm on the other end. All-rounder Faheem Ashraf also lost his wicket early as Cameron Green trapped him in front of the wickets. Starc added one more to his bag when he dismissed Sajid Khan on 5 and Pakistan went for Tea at 100/7, with skipper Azam unbeaten on 29.

Pakistan continued to lose wickets as the final session of the day began. Poor running between the wickets from Hasan Ali saw him going back to the pavilion, as Labuschagne at covers managed to hit the stumps at the striker’s end. Babar (36) also couldn’t resist long as he tried to launch over long-on and ended up giving a catch straight into the hands of Khawaja, becoming the first scalp of debutant Swepson.

With a flurry of boundaries, Shaheen and Nauman Ali added some critical runs for their team, but Swepson came up with another wicket as he dismissed Shaheen on 19, ending Pakistan’s first innings on 148.

Australia skipper Cummins decided against enforcing a follow-on, giving some rest to his bowlers.

The visitors lost David Warner early, with Alam completing a good catch to send him back in the sixth over for 7. However, Marnus Labuschagne joined Khawaja in the middle, and the duo took their side to stumps on 81/1, with a solid lead of 489.