Dubai events spread out across several days due to precautionary measures: Saeed Hareb

Dubai, April 20: Saeed Hareb, Secretary General of Dubai Sports Council and Chairman of the Supreme Organizing Committee of Nad Al Sheba Sports Tournament, has confirmed that every event in the current season of NAS Sports Tournament has recorded a growth in number of participants, and this is an indication of increased awareness about sports and exercising in the UAE, and the growing culture of physical activity in every segment of the community.

“The growing number of participants is also evidence of the great position NAS Sports Tournament enjoys among members of the community,” Saeed Hareb added. “It has become one of UAE’s premier annual sports events, one that everyone eagerly waits for.

“The big number of participants from both inside and outside the country also shows the confidence of participants in the precautionary measures and safety protocols implemented by the authorities in Dubai and adopted by the Tournament.”

Speaking about the schedule, which sees all three competitions – NAS Padel, NAS Cycling and NAS Running – spaced out, HE Saeed Hareb said: “The organizing committee made this decision to avoid overcrowding and ensure complete implementation of all precautionary measures because safety of participants is our top priority.

“This is why we organized, for the first time, a separate qualifying tournament for the NAS Padel Championship. We also distributed NAS Cycling Championship across three nights to make sure all the participants of different age and nationalities, including People of Determination, can compete in a safe environment, with all precautionary measures and safety protocols in place.”

Meanwhile, Sheikh Saeed Bin Maktoum Bin Juma Al Maktoum and Abdulrazak Ahmed are through to the semifinals of the NAS Padel Championship’s Bronze Category for Men after another battling 6-3, 7-6 win over Luis Cobo and Salvador Medina on Monday night.

Team “Uncle Saeed”, who opened their campaign with a grueling 6-4, 3-6, 7-5 win over Butii Al Suwaidi and Mohammed Al Shamsi on Sunday night, will next meet Jordi Perpina and Ignacio Barroso for a place in the final.

Perpina and Barroso also had a tough night on the padel courts of Nad Al Sheba Sports Complex, but managed to punch their ticket to the semi-finals with a 6-3, 7-6 win over the spirited duo of Ali Mohammed Ahlli and Hamad Ismail Ahli.

In the second semi-final of the Men’s Bronze Category, Farhan Hudda and Humaid Ghanem Al Hajeri will square-off against Thomas Benaroya and Hazem Shish.

Hudda and Al Hajeri made it to the last four with a 6-2, 6-3 win over Khalid Al Kamali and Abdulla Al Qasim, while Benaroya and Shish had to work hard for a 7-5, 6-7, 6-1 win over the battling duo of Omar Ibrahim and Rashid Adel Ahli.

This year’s NAS Padel Championship also features an internationally-ranked International Pedal Federation (FIP) Stars tournament and more than 250 of the world’s top professional players with A-Level skills have registered for the tournament.

Organised by Dubai Sports Council, the NAS Sports Tournament has been one of the top sporting attractions during the Holy Month of Ramadan since 2013, and the eighth season of the Tournament features competitions in two others sports besides padel – running and cycling. All three events are being organized in compliance with all COVID-19 precautionary measures and protocols, as well as other guidelines issued by relevant authorities.

The NAS Padel Championship, which kicked off the eighth season of NAS Sports Tournament on April 14, will continue until April 27, while the NAS Run will take place across two nights with the 10km Race scheduled for Wednesday, April 28, and the 5km for Thursday, April 29, while the 75km NAS Cycling Championships will take place across three nights from April 22 to 24.

Dubai Police, Roads and Transport Authority of Dubai, Dubai Municipality and Dubai Corporation for Ambulance Services are the strategic partners for this year’s Nad Al Sheba Sports Tournament, while Dubai Duty Free, Pocari Sweat and Tecnotree have signed up as sponsors for the 8th season of the Tournament, which is one of the biggest events of its kind in terms of participation and prize money. 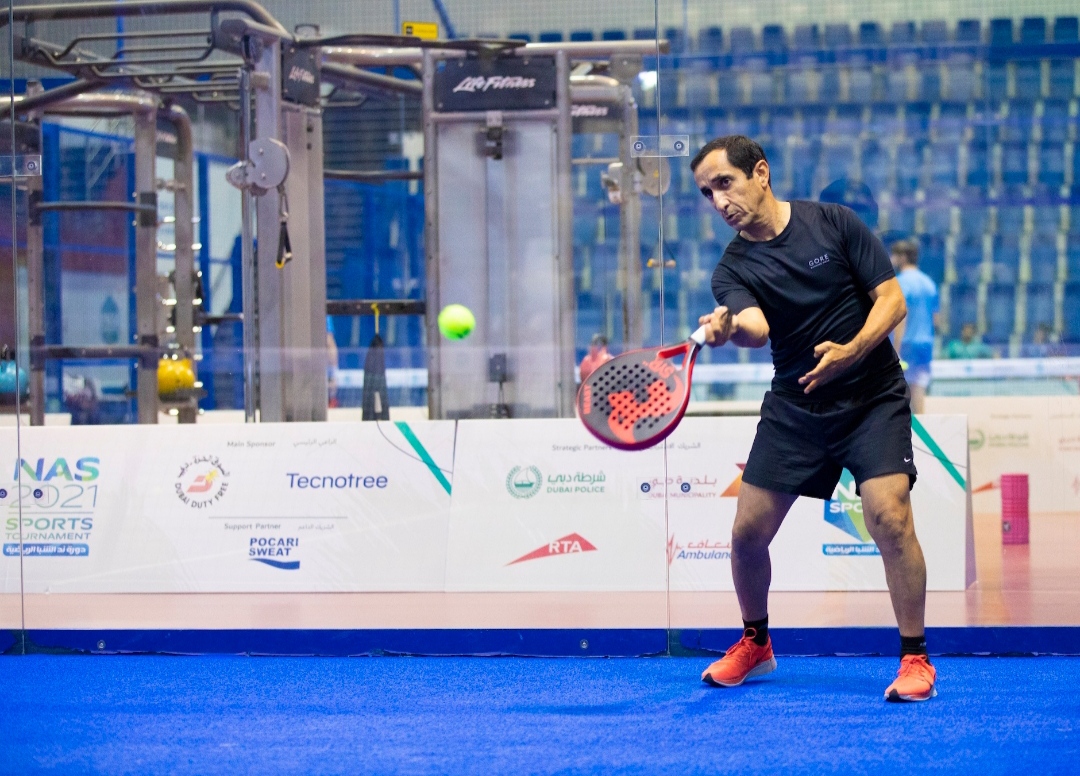