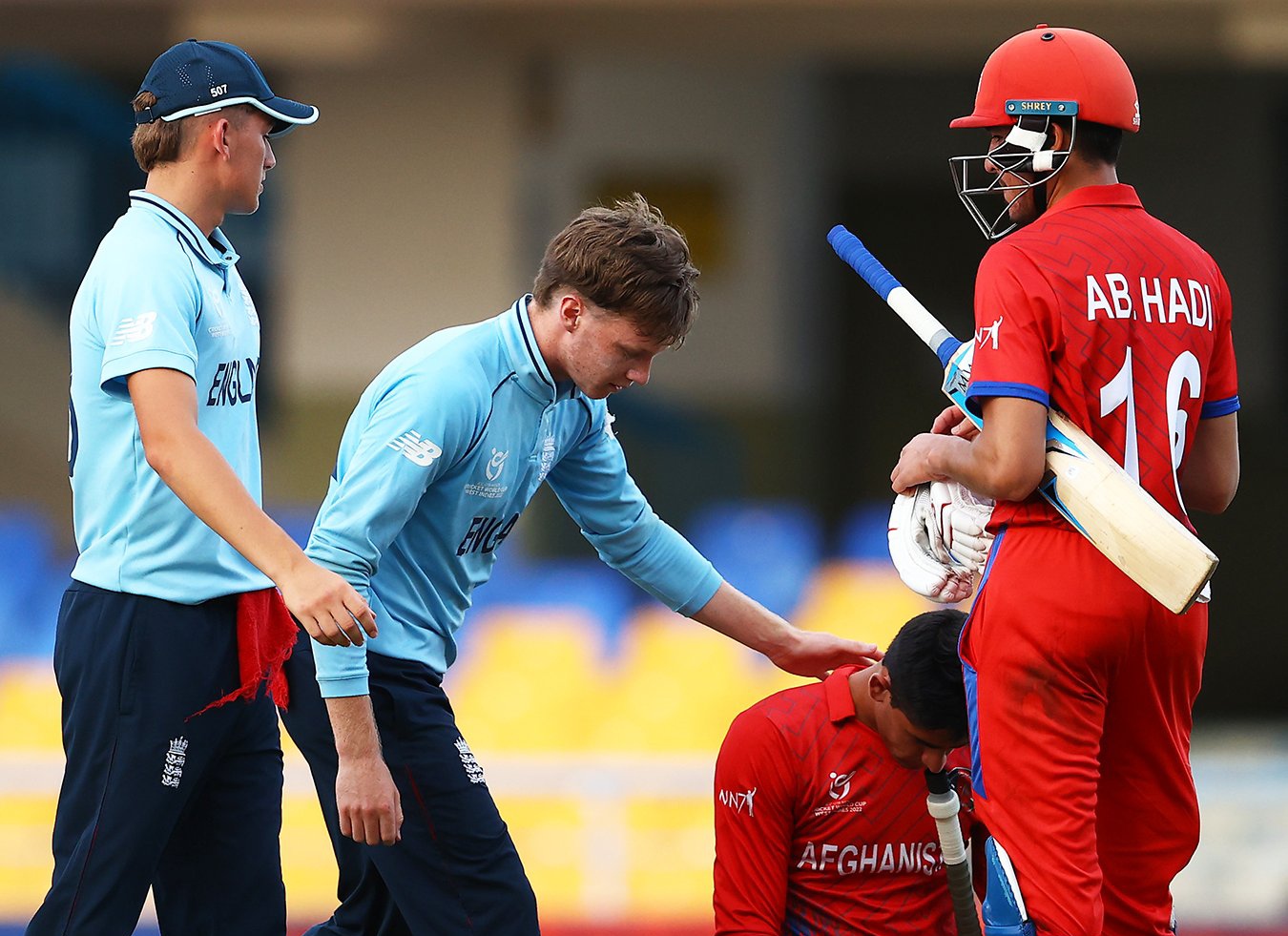 Dubai, Febuary 2: England kept their nerve to become the first team to reach the ICC Under 19 Men’s Cricket World Cup final after edging a thriller with Afghanistan by 15 runs.

Spinner Rehan Ahmed became the hero for the Young Lions, taking three wickets in the penultimate over at crucial point when their opponents needed just 18 runs from the last 10 balls.

England will now face the winner of the other semi between Australia and India on Saturday in the final – a remarkable turnaround from the previous tournament just two years ago in South Africa when they finished ninth.

As for Afghanistan they will head to the Coolidge Cricket Ground for the third-place playoff.

Rain delayed the first of the two Super League semi-finals at the Sir Vivian Richards Cricket Ground after England won the toss and chose to bat.

Once both sides were eventually able to take to the field in Antigua and Barbuda it was Afghanistan who made the stronger start.

Jacob Bethell, who lit up the quarter-final tie with 88 against South Africa last week, was trapped LBW by Naveed Zadran, an early sign that England faced a difficult task.

Skipper Tom Prest then joined vice-captain Bethell in making an early departure, reducing them to 2-56, as the Young Lions struggled to command with the bat.

George Thomas did steady the ship with an excellent 50 after a slightly nervy introduction at the crease, only beaten by an excellent delivery from Noor Ahmad.

And when William Luxton was clean bowled by Izharulhaq Naveed, Prest’s team were five wickets down having barely put 100 runs on the board.

However, the rain came again to delay play for a further half hour and led to revised conditions of 47 overs per side.

England’s back-end partnership of 95 from George Bell and Alex Horton then managed to put a different dynamic on their innings. The duo attacked the Afghanistan seamers fiercely which managed to top the final total up to 231.

The earlier interruptions from the weather meant Afghanistan had a revised DLS target to match this score and chasing their first ever ICC U19 Men’s Cricket World Cup final, they knew a good start was needed to seize control of the game.

Opener Nangeyalia Kharote was unable to provide it when English seamer Josh Boyden claimed his wicket with just the third ball of the innings.

But Kharote’s replacement Allah Noor, smashed a huge six to get off the mark and quickly gave his team a platform.

The 18-year-old produced a marvellous knock, which featured eight boundaries as the momentum of the semi swung back the Afghanistan’s way.

Along with wicketkeeper Mohammad Ishaq the pair got their team past 90, with Noor making a valuable half-century.

England’s crucial breakthrough came after some wonderful fielding led to a run-out for Ishaq with wicketkeeper Horton reacting quickly to a loose throw at the strikers end.

Noor remained stubborn but eventually went for 60, with Thomas Aspinwall claiming a vital wicket. That set-up a frantic-finish that could have gone either way.

The 44th over for England appeared to have turned the game when two no balls in-a-row gifted their opponents eight runs, before Abdul Hadi (37 no) smashed a huge six to take them to 200 and tantalising close.

But Ahmed’s late flurry and a nerveless final over from Boyden carried England over the line to their first ICC U19 Men’s Cricket World Cup final since 1998 in South Africa, when they lifted the trophy.