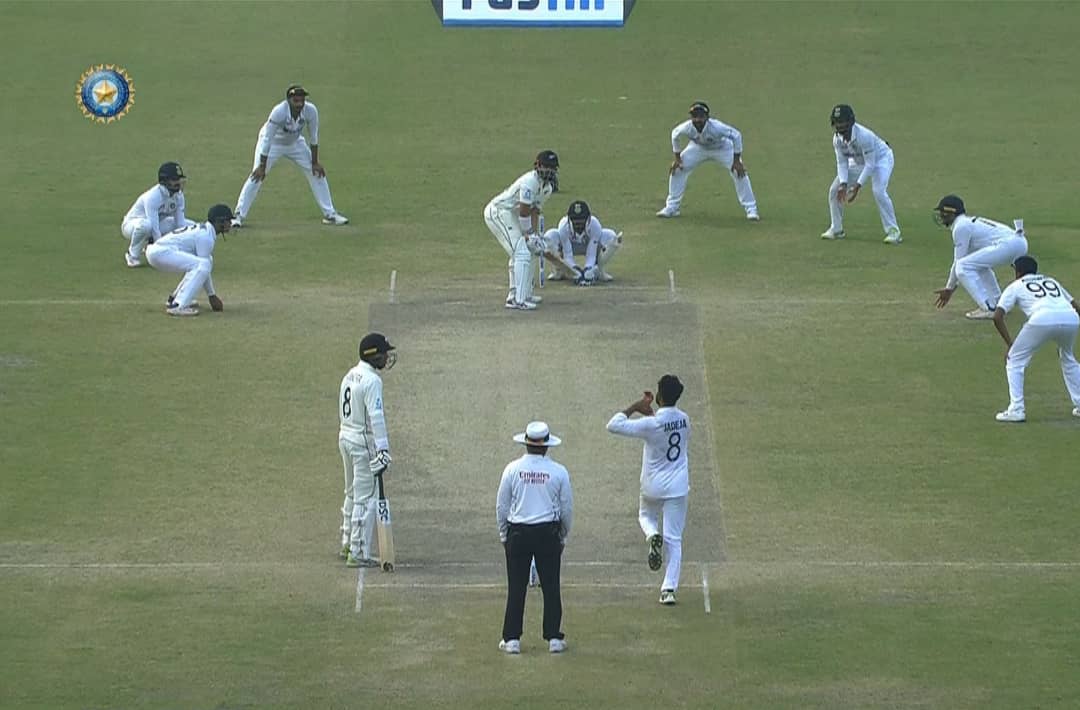 Kanpur, November 29: New Zealand ‘s Rachin Ravindra and Ajaz Patel came up with a determined performance to hold off the Indian spinners in the final hour of the Test to earn a commendable draw in Kanpur.

India started the day knowing they had to get wickets and get them early in order to force the issue on the final day. But New Zealand were in no mood to give them an inch in the morning session in Kanpur. Tom Latham and especially Will Somerville batted expertly showing great patience and application on the crease.

They were largely able to frustrate the Indian pacers and the spinners, who were hardly able to carve out an opening. The visitors headed to lunch unscathed with a draw looking the likeliest of the three results possible.

India were much more willing to try things out in the second session and a change of tactic would bring about their first wicket of the day. Going round the wicket, Umesh Yadav peppered Somerville with a short delivery, which finally brought an end to his excellent knock of 36.

Tom Latham would then bring up back-to-back half-centuries in the match, joined by skipper Kane Williamson on the crease. He would though be undone by the slow nature of the wicket as he chopped on a wide-ish delivery from Ravichandran Ashwin onto his stumps for 52.

Williamson and Taylor then dug their heels in and it seemed that the visitors would not have to endure any further damage in the session. But Ravindra Jadeja struck in the final over of the session, trapping Taylor for 2 as the Indians headed for tea with renewed vigour.

Henry Nicholls couldn’t last long after tea as Axar Patel got his first scalp of the innings, getting him lbw plumb in front of the stumps. He only contributed 1 run to the scorecard.

Williamson and Blundell then embarked on a blockathon but the skipper was undone by Jadeja who dismissed him with an lbw call on 24. India now had genuine belief that they could get the job done.

Rachin Ravindra joining Blundell on the crease frustrated India for a few overs before the latter was dismissed in an unlucky manner being bowled by Ashwin for 2.

For all intents and purposes, Jamieson and Ravindra looked comfortable enough at the crease and seemed to be headed towards clinching a draw for the visitors.

But India had one final ace up their sleeve with the second new ball available and Ravindra Jadeja made full use of it. He got the lbw dismissals of Jamieson and Southee. The delivery to Southee especially was a peach as it pitched on middle and leg and straightened enough to trap him plumb.

All of a sudden it became a nail-biting affair as India needed 1 wicket for a victory but had a battle on their hands with the light quickly dwindling. Standing in their way were Rachin Ravindra and Ajaz Patel.

They eventually ran out of time as the pair batted out 52 deliveries to clinch a well-deserved draw for the Kiwis. It was high drama at the end as the light meter was out after every over but the grit of the two batters was something to be highly commended.

The two sides will now face off in Mumbai for the second and the final Test of the series on 3 December with the score evenly poised.