‘He wants to hit every ball for six’: Mohammad Yousuf wants this Pakistan youngster to learn from Virat Kohli 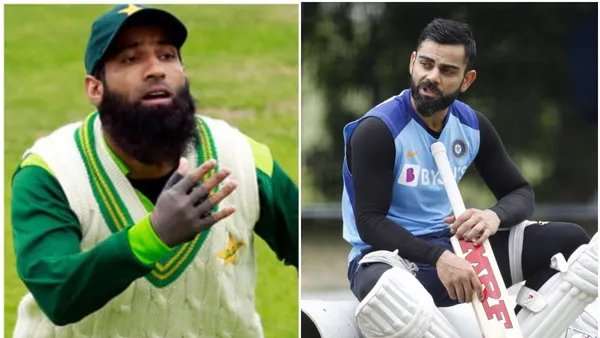 Yousuf who has been working with young Pakistan batsman in National High Performance centre has also been working with Azam Khan who is known for his big six hitting ability .
Azam is a son of former Pakistan wicketkeeper batsman Moin Khan and is yet to make his debut for Pakistan.

Being heavy in weight , playing for Quetta Gladiators in the Pakistan Super League, Azam was ridiculed , but the 22-year-old batsman has shown tremendous resilience to overcome his weight issues and out up impressive performances.

“He’s young and has just played one season of First-Class cricket. He’s an excited and emotional player who likes to hit sixes. He plays amazing cover drives and on drives but has this sudden urge of hitting sixes. One, he’s playing more T20s leagues and second, sixes are liked a lot more. But the amount of hard work he has shown in his hard work and in batting deserve a praise,” Yousuf was quoted in saying in Pakistan media.

Former Pakistan premier batsman Mohammad Yousuf said, he is yet to work with Azam on his batting .

“Our main aim was to reduce his weight. When he comes next, we will work on his batting as well. Sixes are important, but only when the time and moment is correct. If the scoreboard is ticking, there’s no need. Look at these big players, that’s how these guys play – Kohli, Williamson, Babar and Rohit,” Yousuf added.