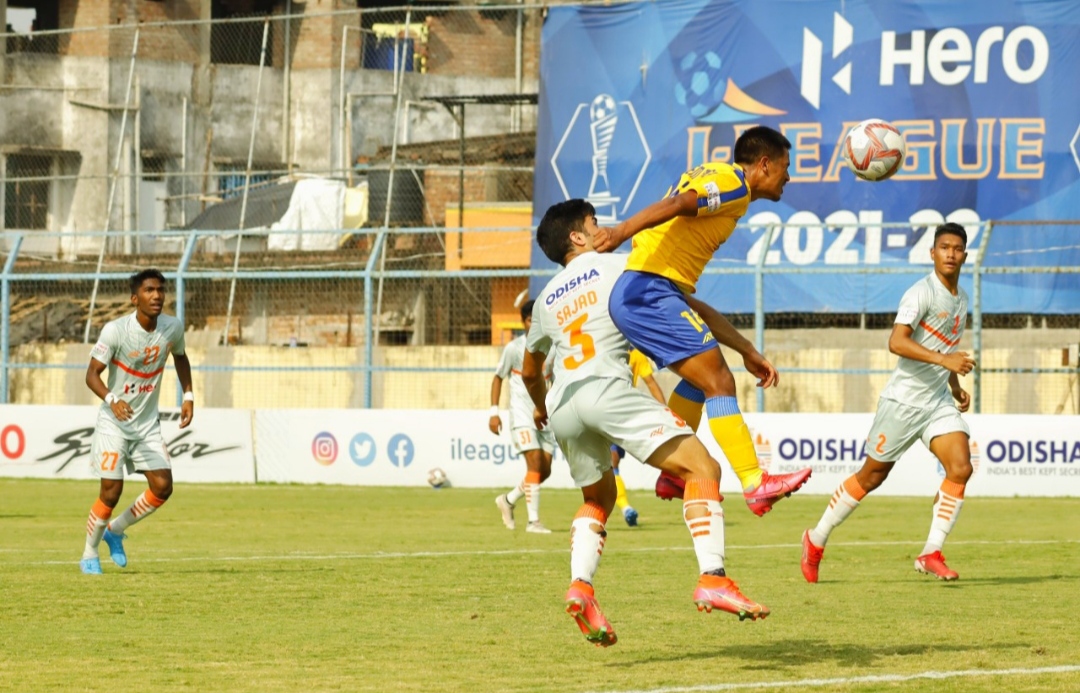 Naihati, April 26: Indian Arrows scored more than one goal for the first time this season to secure a 2-1 win over Real Kashmir, here at the Naihati Stadium. Sajad Parray and Parthib Gogoi were on target as Real Kashmir had to walk away with three major injury concerns.

The young lads of Indian Arrows got off to a very composed start, retaining possession well in midfield and the defensive third. However, the initial attacks came from Real Kashmir.

A long ball was whipped out to the front by Rohmingthanga Bawlte towards Mason Robertson. The ball was a tad heavy and Robertson hesitated as Arrows keeper Zahid Bukhari advanced and claimed the ball. Minutes later, Lalchhawnkima got his head to a Sena Ralte corner but the shot was just off-target.

Indian Arrows opened their account in the 12th minute when Bikramjit Singh fouled Brijesh Giri near the edge of the Real Kashmir box. Parthib Gogoi took the freekick and rattled the crossbar with it. The rebound fell to Vinay Harji, who could not head it in, after which left-back Sajad Parray mopped up the pieces by tapping the ball into an empty net giving Arrows a surprise lead.

Real Kashmir were able to keep their head in the game as they snatched a leveller seven minutes later. Bawlte lobbed a good ball into the box and Malem Meitei beat his marker and headed the ball past Bukhari to draw his side level.

Real Kashmir were dealt a huge injury blow when their skipper, Mason Robertson, went down at the midway point of the first half. The striker was clutching his hamstring as he walked off the pitch and was replaced by Thomyo Shimray.

Both sides entered the opposition box frequently but were unable to convert any of their chances as the first half ended with both sides getting a goal for themselves.

In the second half, Shimray had a couple of opportunities inside the first ten minutes of the second half. The first chance was thwarted by Halen Nongtou while Brijesh Giri’s well-timed tackle denied the second.

At the other end, Vibin Mohanan went on a good run from midfield. The youngster had options on either side but chose to shoot himself and saw his effort blocked by the defence of Real Kashmir.

Real Kashmir were dealt another major injury blow when Bawlte went down. Ragav Gupta came on to replace the injured attacker.

The substitute was involved in an excellent move, minutes later as he played the ball to Meitei, who put Pratesh Shirodkar through on goal. Before he could get a shot away, Shirodkar was brought down inside the box by Vibin Mohanan and the referee instantly pointed to the spot. Fran Gonzalez stepped up to take the spot-kick, sent the keeper the wrong way but failed to keep his shot on target as the ball went wide, resulting in a huge let off for Indian Arrows.

The injury woes of Real Kashmir got heavier and heavier as Gonzalez was stretchered off, moments after missing a crucial penalty. Samuel Kynshi came on to replace the injured midfielder.

Within minutes, the game went from bad to worse for Real Kashmir as Arrows swarmed forward. Substitute Satendra Yadav pranced down the right flank and cut it back for Mohanan. This time the midfielder opted to pass instead of shooting and found Gogoi with his through ball. Gogoi beat keeper Niraj Kumar and slotted the ball past him to give Arrows the lead of the game again, in the 73rd minute.

Indian Arrows almost added another one to their tally as Yadav’s diving header was pushed on to the bar by Kumar and went out for Arrows’ first corner of the game ten minutes from time. Yadav was wreaking havoc in the final third but was kept at bay by astute defending on two different occasions. Paolenmang Tuboi ensured the attacker did not get a one-on-one with the keeper while Rishik Shetty’s excellent tackle blocked Yadav’s strike.

The full-time whistle was blown and Indian Arrows emerged with an unexpected victory. The victory takes the young side level on points with Real Kashmir. A third win of the season means Arrows have now won more games than Real Kashmir.