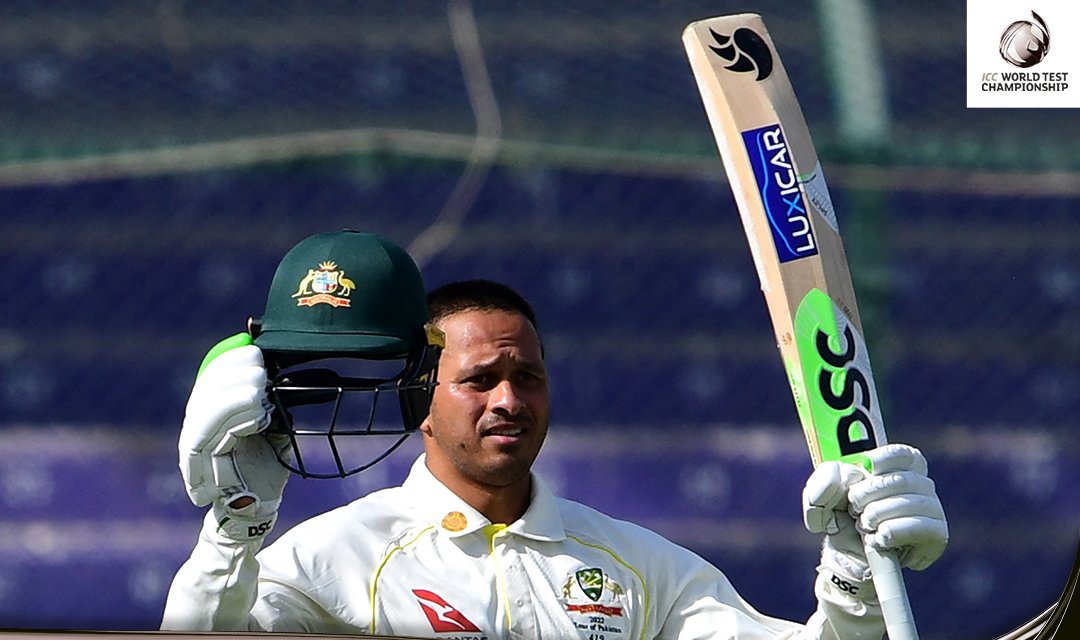 Khawaja was easily the standout batsman in the three-match Pakistan-Australia Test series, having aggregated 496 runs from five innings at a whopping 165.33. His scores in the series read 97, 160, 44, 91 and 104 – the last two coming in Australia’s series-clinching 115-run win in the third Test in Lahore. That was after he’d begun the year with twin hundreds in the New Year’s Ashes Test in Sydney, which happened to be his comeback to the format after more than two years.

The left-hander leapfrogged David Warner, Rishabh Pant, Virat Kohli, Travis Head and Rohit Sharma respectively to jump up six spots to No.7 in the latest ICC Test Rankings for batters.

Abdullah Shafique, who finished as the second-highest run-scorer in the series with 397 runs at 79.40, jumped up 22 spots to break into top 40, while Mohammad Rizwan slipped eight spots to No. 19.

Meanwhile, England skipper Joe Root has slipped to No.4, with Steve Smith and Kane Williamson taking up the No. 2 and 3 position respectively in a chart led by Marnus Labuschagne. Joshua de Silva’s heroic hundred in Grenada has helped him jump 21 spots to No.63.

Among all-rounders, Jason Holder has been displaced by Ravichandran Ashwin at the No.2 spot, while Kyle Mayers’ brilliance in Grenada has helped him leap a staggering 29 spots to No. 11. Ravindra Jadeja retains the top position.

Mayers, who bagged 2/13 and 5/18 in the third Test, his only appearance in the series, has jumped up 33 spots to No.48 among bowlers. Shaheen Afridi has displaced Kyle Jamieson to claim the fifth spot, while Mitchell Starc has jumped up four spots to No.11.

Australia skipper Pat Cummins has further consolidated his status as the top-ranked Test bowler, after having bagged 12 wickets from three Tests, including a game-changing five-for in the third.

In ODIs, Adam Zampa jumped up six positions to break into top 10 in the latest ICC ODI Rankings for bowlers. Zampa returned 4/38 in Australia’s 88-run win over Pakistan on Tuesday, 29 March.

Shakib Al Hasan jumped up four spots to No. 8, while fellow countryman Taskin Ahmed jumped up 15 spots to No.33, with the latter having returned 5/35 in Bangladesh’s dominant nine-wicket win over South Africa last week. Kagiso Rabada meanwhile, has slipped from No.8 to No. 13.

Tamim Iqbal jumped up to No.20 in batting rankings, while Quinton de Kock slipped a spot to fifth, being overtaken by Rohit Sharma. Imam-ul-Haq’s valiant hundred on Tuesday has helped him return to the top 10.

Nepal’s Rohit Paudel has jumped up 41 places to No.83, after having scored a stroke-filled 126 in his side’s narrow six-run defeat to Papua New Guinea last week.

Colin de Grandhomme has re entered the top-10 among all-rounders and is currently placed at No.7.