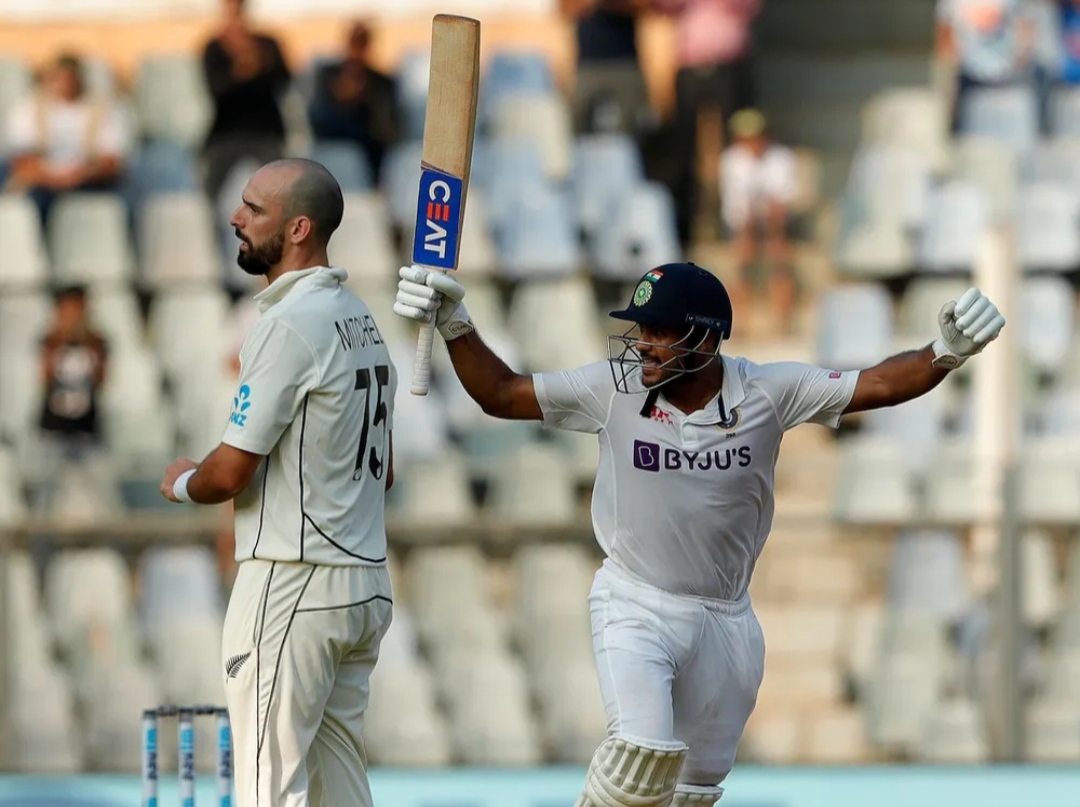 Mumbai, December 3: Mayank Agarwal headlined India’s first day of the Wankhede Test with a stunning century after Ajaz Patel rattled the hosts with a four-wicket haul.

Agarwal’s unbeaten 120* consisted of 14 fours and 4 sixes and the brilliant effort came after a spin masterclass from Patel that had India on the back foot.

With unseasonal rains lashing Mumbai over the last couple of days, a wet outfield ensured that the first session was completely washed out. After electing to bat first, India got off to a steady start. Openers Shubman Gill and Mayank Agarwal rarely gave any chances despite New Zealand keeping things tight for the initial overs.

Ajaz Patel was brought into the attack in the seventh over and persisted, controlling the scoring rate. After India went past the fifty-run opening stand, Gill began to accelerate. He hit Will Somerville for a magnificent six over mid-wicket in his third over. Then after laying low for a few overs, tonked Somerville for a couple of fours.

Just when he was looking to unleash more such shots, Ajaz had him caught at slip with a ball that spun away and caught Gill’s outside edge as he pushed forward; thus breaking the 80-run first-wicket partnership.

Ajaz was not going to keep quiet with just one wicket. He delivered a brutal double blow in his next over, cleaning up Cheteshwar Pujara and Virat Kohli for ducks. Pujara was bowled on the second ball, after surviving an lbw review on the first delivery. Kohli was trapped in front on the final delivery, a decision he reviewed but failed to overturn.

Agarwal continued his dominant run after the break, punishing the bad balls and pairing with Shreyas Iyer to stabilise the India innings. Iyer played the anchoring role, complementing Agarwal’s aggressive intent. The partnership reached 80 and was broken by Patel when he had Iyer caught behind for a 41-ball 18.

Losing partners at the other end did not deter Agarwal. He stuck to the plan and combined with Wriddhiman Saha to keep India going. Saha, for his part, remained firm at one end like Iyer giving Agarwal the support he needed. The latter’s handwork paid off as he brought up his fourth Test ton. The duo soon brought up their fifty partnership as well, pushing India’s total past the 200-run mark.

The New Zealand bowlers could create no further chances as the hosts ended the day on 221/4.