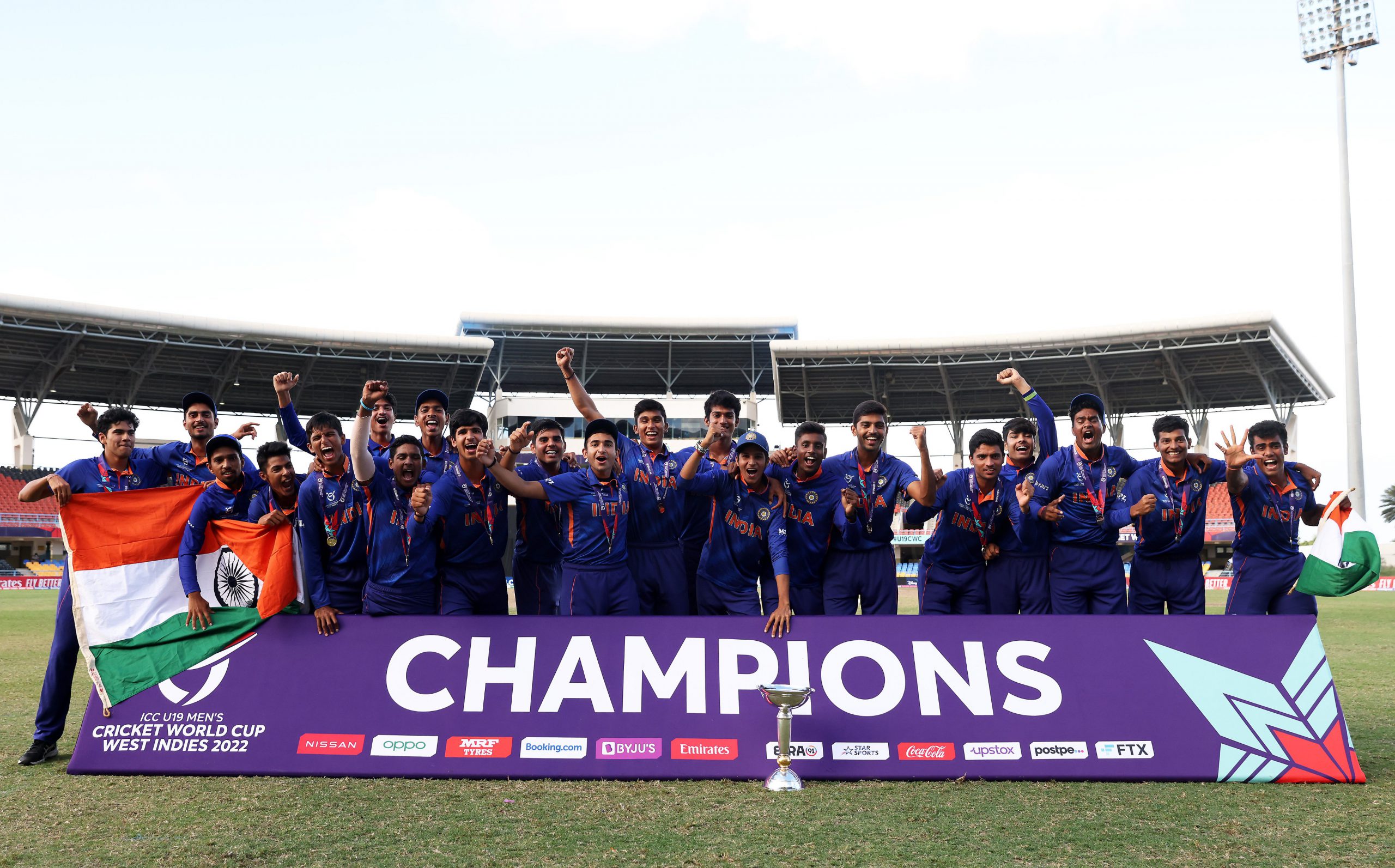 Antigua , Febuary 6: India are the 2022 ICC U19 Men’s Cricket World Cup champions after beating England by four wickets at the Sir Vivian Richards Stadium in Antigua.

A brilliant five-wicket haul from all-rounder Raj Bawa set the tone with the ball for India, with Ravi Kumar also chipping in with 4/34.

And classy half-centuries from Shaik Rasheed and Nishant Sindhu helped India reach their target of 190 with four wickets and 14 balls remaining.

India’s triumph means they have won the ICC U19 Men’s Cricket World Cup for a record fifth time, with England having to settle for a runners-up spot in the first appearance in a final at the tournament in 24 years.

The showpiece match in the Caribbean got underway after England had won the toss and elected to bat first. But the innings got off to a shaky start when Ravi Kumar struck in the second over, trapping dangerous opener Jacob Bethell in-front to send the big-hitting Warwickshire batter back to the hutch for just two.

And England’s early struggles continued when Tom Prest dragged a short ball from Kumar onto his own stumps to depart without scoring, leaving England at 18/2 in the fourth over.

George Thomas and James Rew led the rebuild, with Thomas keeping the attacking intent going with five early boundaries, including a spectacular six, and given a let-off when he was dropped off all-rounder Raj Bawa.

But the talented Bawa – who took 4/47 against South Africa and hit 162* against Uganda in the group stage – did get his man at the second attempt, having Thomas caught in the covers for a 30-ball 27.

And one wicket quickly became three for Bawa when he had William Luxton (4) and George Bell (0) caught behind off consecutive deliveries in his next over, leaving England in a heap of trouble at 47/5.

India’s right-arm seamer continued to cause problems, and he bagged his fourth scalp of the day when Rehan Ahmed (10) edged into the cordon.

England were in danger of being skittled, but did have Rew looking composed at one end, and the Somerset batter helped his side up towards three-figures with a 30-run partnership with Alex Horton, before spinner Kaushal Tambe tempted Horton into a big heave that he could only plink to midwicket.

The England camp have been keen throughout the tournament to stress that they bat deep, and that depth was put to the test with James Sales coming to the crease at number nine with just 91 runs on the board.

But Sales played well, giving Rew the partner that he needed to build England towards a competitive score.

After digging in and soaking up some overs, Rew moved through the gears, hitting 12 fours in a wonderful knock as he and Sales (34*) added 93 for the eighth wicket.

The 18-year-old was denied the century that his battling efforts deserved when he was caught off Kumar in the deep for an outstanding 95. England added just five further runs, with Kumar picking up his fourth when Aspinwall was caught behind, and Bawa sealing his five-wicket haul with an edge off Joshua Boyden.

Set 190 to win their fifth ICC U19 Men’s Cricket World Cup, India suffered an early setback when the leading opening bowler of the tournament struck with just his second ball.

England’s Joshua Boyden has been outstanding throughout the World Cup, particularly first up, and he was straight into the action again when he lured Angkrish Raghuvanshi into an edge to send the young opener back for a two-ball duck.

A 49-run stand between Harnoor Singh and Shaik Rasheed steadied the ship for India, before the former was brilliantly caught behind by Horton off Thomas Aspinwall.

But India continued their steady progress towards the target as captain Yash Dhull joined Rasheed at the crease.

With little to no pressure in terms of run rate, Dhull and Rasheed were able to soak up the deliveries from spinners Ahmed and Prest, playing uncharacteristically slowly through the first half of the allotted 50 overs to continue to set a platform for their side.

Rasheed looked in nice touch, hitting six fours on the way to a 50, only to lose focus shortly after reaching the milestone to top-edge a catch to Rew off James Sales.

And Sales gave England hope when he had Dhull caught in the deep for 17, the first time the India skipper had been dismissed at the tournament without reaching at least a half-century.

At 97/4 after 28.2 overs and still requiring 93 runs to win the match, India had work to do. But Bawa and Nishant Sindhu were equal to the task, building a terrific 67-run partnership to bring India within reach of the target.

But as long as Sindhu remained in the middle India could be confident, and he reached his 50* with the win in sight.

Any risk of a nervy finish from India was avoided thanks to a late cameo from Dinesh Bana to seal the victory, with the number eight smashing back-to-back maximums to finish the job in style with 14 balls still remaining.