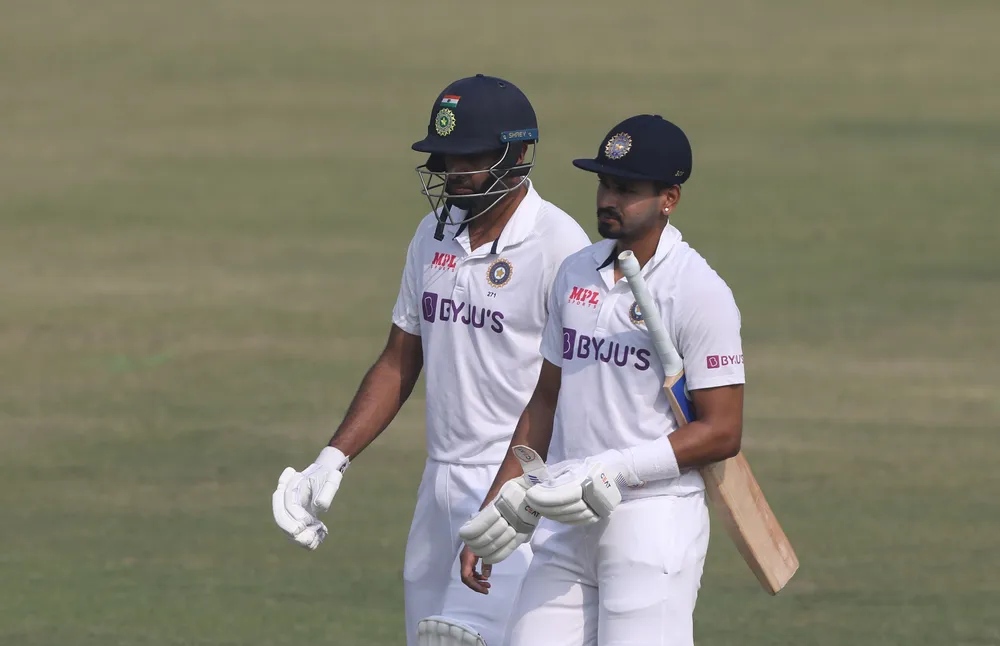 Kanpur , November 28: India ended day four on a high after half-centuries from Shreyas Iyer and Wriddhiman Saha allowed them to set New Zealand a target of 284 before Ravichandran Ashwin struck late to get the scalp of Will Young.

Shreyas Iyer again stole the show in his debut Test match with his knock of 65 helping India in a position of command on day four of the Kanpur Test. Starting the day at 14/1, another brilliant morning session from the New Zealand pacers put the hosts in a spot of bother, with 5 wickets down and the lead only hovering around the 100-run mark.

But Iyer and Ashwin (32) steadied the ship for India before the lower-order also chipped in with some invaluable runs. The day started with Kyle Jamieson snaring the wicket of Pujara on 22. Skipper Ajinkya Rahane would then follow suit, after looking tetchy in his brief stay at the crease. Ajaz Patel trapped him plumb in front of the stumps for 4.

A brilliant over from Southee would bring him two wickets in an over. The first one to go would be Mayank Agarwal, who edged one to Latham to a delivery that was shaping away from him. He would then trap Jadeja with a prodigious inswinger, as he failed to contribute a single run to the scorecard.

Ravichandran Ashwin and Iyer would then counter-attack, as India headed to lunch at 84/5.

The duo would continue in the same vein in the second session before the introduction of Jamieson brought an end to Ashwin’s crucial knock of 32. Trying to put a wide delivery away, Ashwin would end up chopping the delivery onto his own stumps. Iyer would then embark on a crucial partnership with Wriddhiman Saha, as the game was quickly drifting away from the visitors.

Iyer would bring up a half-century as his brilliant match continued while upping the ante by playing some adventurous shots. He would be dismissed on 65 by Southee just on the stroke of tea but not before a vital stand of 64 runs with Saha. For his part, the veteran wicketkeeper-batter also played his part, nudging the ball around and rotating the strike regularly.

The final session would be a story of great frustration for the visitors as they failed to break the partnership between Saha and Axar Patel. But to their credit, despite not being able to find the breakthroughs, they did not let the Indian batters cut loose and up the scoring rate at a rapid pace. In the meanwhile, Wriddhiman Saha would reach a gritty half-century, again proving his dogged abilities as a batter.

After a short water break in the 79th over, the two batters finally started to up the scoring rate as it became clear that a declaration was near. It would finally come after 81 overs, with India’s score at 234/7 and the lead at 283 runs. With light quickly dwindling, it would be a tricky proposition for the New Zealand openers to counter the final few overs of the day.

And Ashwin delivered exactly the breakthrough that India required, trapping Will Young for 2. The opener was denied a review by the umpires as time had run out and replays showed that the delivery would have been missing the stumps. The visitors now find themselves in a spot of bother ending on 4/1 and needing 280 runs to win on the final day.

India on the other hand, will be confident of taking the nine wickets required for a victory on a pitch that is assisting their spinners.