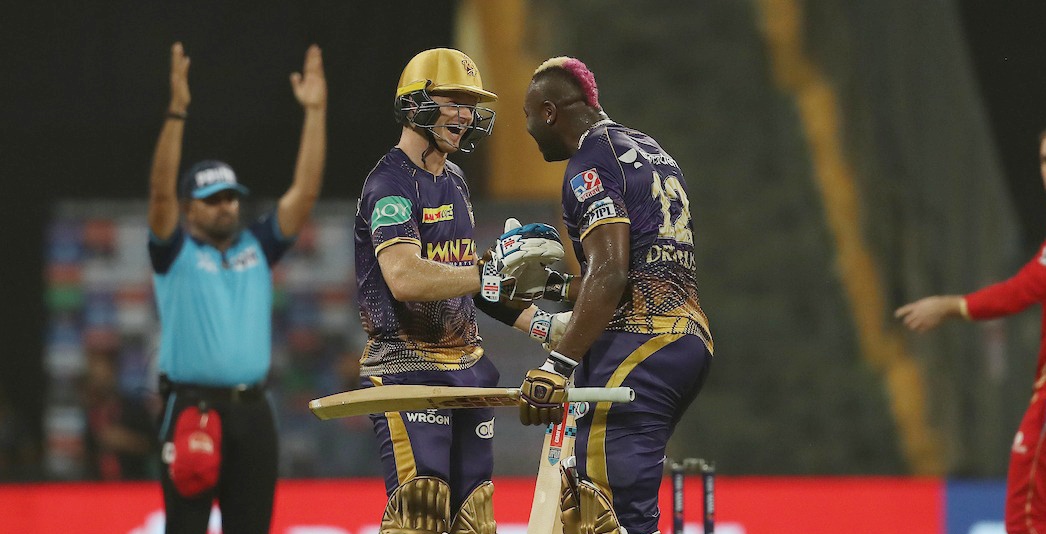 Mumbai, April 2: The Kolkata Knight Riders (KKR) were back to winning ways in the TATA Indian Premier League (IPL) 2022 by beating the Punjab Kings (PBKS) by 6 wickets on Friday at the Wankhede Stadium in Mumbai.

Umesh Yadav ripped through PBKS’ batting line-up with a brilliant 4-wicket haul before Andre Russell’s annihilating unbeaten knock of 70 off just 31 deliveries propelled KKR to a commanding victory against PBKS.Chasing 138 for victory, the Kolkata Knight Riders lost two early wickets. Ajinkya Rahane, who reached the 4000 IPL runs landmark in the game, was later caught by Odean Smith at short third man. Venkatesh Iyer was dismissed to a sharp-catch by Harpreet Brar inside the circle. Sam Billings joined skipper Shreyas Iyer, who was looking in solid touch and was dealing in boundaries.KKR were 51-2 at the end of powerplay before Rahul Chahar bowled a special double-wicket maiden over to dismiss skipper Iyer for 26 and Nitish Rana for a second-ball duck.

After a quiet couple of overs, Andre Russell clubbed two giant sixes off Harpreet Brar as KKR scored 17 runs from the 10th over. The Knight Riders hammered 30 runs off the 12th over, bowled by Odean Smith. While Russell smashed three sixes and a four, Billings wrapped the over with a maximum straight down the ground on a free-hit.After only five runs coming from the 13th over by Rahul Chahar, Russell reached the half-century figure in the next over and ended the Arshdeep Singh over with a slice over deep-cover for six.

The Knight Riders required only 14 runs off the final six overs and Russell wrapped up the chase with consecutive sixes and remained unbeaten on 70 off just 31 deliveries to complete a dominating victory, with more than five overs to spare. Earlier, the Punjab Kings, who were put in to bat first, made one change – Kagiso Rabada replaced Sandeep Sharma in the eleven.

Umesh Yadav continued his fine form with the new ball and dismissed the PBKS skipper – Mayank Agarwal for LBW in the opening over. The pressure of an early wicket didn’t seem to bother PBKS as Bhanuka Rajapaksa, the new man in, was up and running with 3 fours and 3 sixes before he was caught inside the circle off Shivam Mavi’s bowling. PBKS lost their third wicket in the form of Shikhar Dhawan, who was caught behind for 16 and the Punjab Kings were 62/3 at the end of powerplay.

The Knight Riders added two more wickets to the tally after the first six overs. Yadav scalped his second wicket of the innings after Livingstone was caught in the deep while Narine cleaned up the stumps of Raj Bawa in the next over.With PBKS placed at 85/5 after the first ten overs, the pressure mounted on the batters as Shahrukh Khan was dismissed for a duck in the 13th over, bowled by Southee. Yadav, who was back to bowl his final over of the innings struck twice and produced a double-wicket maiden to dismiss Harpeet Brar and Rahul Chahar.

While Brar was cleaned up by the pacer, Chahar was caught by the slip fielder. Kagiso Rabada and Odean Smith added crucial 35 runs for the 9th wicket before the Knight Riders picked up the final two wickets to reduce PBKS to 137. Rabada was caught in the deep, thanks to a stunning catch by Southee while Arshdeep Singh was run-out for 0.