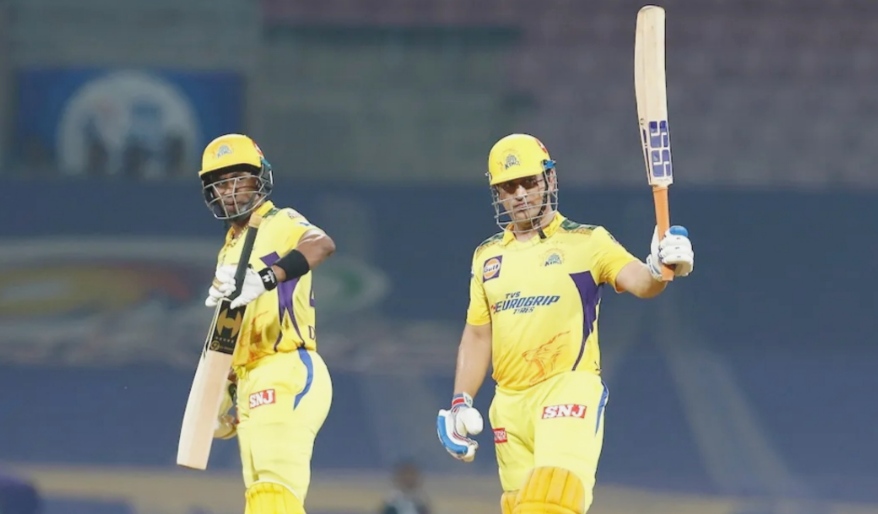 Mumbai, April 22: Chennai Super Kings (CSK) were back to winning ways in the TATA Indian Premier League (IPL) 2022 after defeating the Mumbai Indians (MI) by 3 wickets on Thursday at the DY Patil Stadium in Navi Mumbai.

MSD, with his calm demeanour, got CSK across the line by successfully finishing the game in style with the bat after Mukesh Choudhary shined with bowling figures of 3-19.

Chasing 156, CSK lost Ruturaj Gaikwad’s wicket on the first delivery of the innings after the opener was caught at point off Daniel Sams’ bowling.

Mitchell Santner, who was promoted up the order, struck two fours but became Sams’ second victim after the left-handed batter was caught by Unadkat. Ambati Rayudu counter-attacked with two maximums while Robin Uthappa creamed two fours in the 5th over. Uthappa wrapped the powerplay with a six and CSK were 46-2 at the end of the powerplay.

CSK’s 50 was up in the 8th over after Uthappa clubbed his second six of the innings. However, the opener was caught in the deep off Unadkat’s bowling in the 9th over. CSK were 68-3 at the 10-over mark.

Ambati Rayudu and Shivam Dube crunched a six each but Daniel Sams once again brought MI back to the game after Dube was caught behind. Sams scalped his fourth wicket of the innings to dismiss Rayudu and CSK required 53 off the final five. Riley Meredith scalped CSK skipper Jadeja’s wicket and conceded only 5 runs in the 16th over. Dwaine Pretorius flicked a six and MS Dhoni hit a four to bring the equation down to 28 off 12 deliveries.

CSK scored 11 runs in the penultimate over and required 17 off 6 deliveries. MS Dhoni kept his calm and finished the game in style with one six and two fours to get CSK over the line.

Earlier, MI, who were put in to bat first, made three changes – Daniel Sams, Hrithik Shokeen and Riley Meredith were named in the eleven.Mukesh Choudhary provided a dream start with the ball for CSK, with two wickets in the first over.

While MI skipper Rohit Sharma was caught at mid-on, Ishan Kishan’s off-stump was uprooted by the pacer. Suryakumar Yadav hit three crisp shots for fours but Choudhary scalped his third wicket as Dewald Brevis was caught behind for 4. MI were 42-3 after 6 overs.

Mitchell Santner removed the dangerous Suryakumar Yadav for 32 after the right-handed batter was caught at long-leg. MI were 56-4 at the halfway mark. Debutant Hrithik Shokeen creamed two fours and Tilak Varma swept a six to ease off the pressure. Dwayne Bravo put an end to the partnership after Shokeen was caught by Uthappa.

MI crossed the 100-run mark in the 15th over after Kieron Pollard smacked a four followed by a giant maximum straight down the ground.A tactical field placement near the ropes brought an end to Pollard’s innings after the right-handed batter was caught off Maheesh Theekshana’s bowling.

Bravo trapped Daniel Sams LBW in the 18th over. Tilak Varma smacked a six in the penultimate over and reached his half-century. Jaydev Unadkat finished the innings with a four followed by a six as MI posted 155-7 in the first innings.