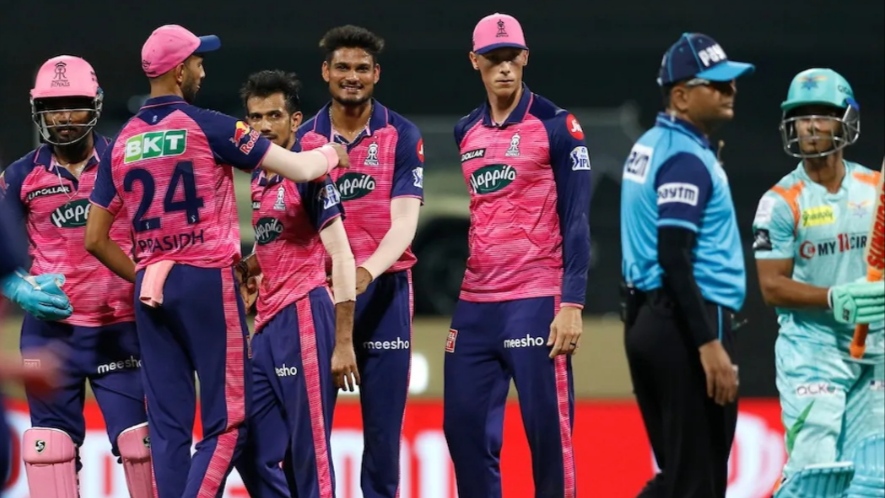 Mumbai, April 11: Rajasthan Royals (RR) climbed to the top of the table in the TATA Indian Premier League (IPL) 2022 after defeating the Lucknow Super Giants (LSG) by 3 runs on Sunday at the Wankhede Stadium in Mumbai.

Shimron Hetmyer’s impeccable 59*(36) guided Rajasthan Royals to a competitive total of 165-6 before Yuzvendra Chahal shined with a four-wicket haul as RR successfully defended the target in the last over.

Chasing a tricky target of 166, Lucknow Super Giants lost the wickets of skipper KL Rahul and Krishnappa Gowtham as Rajasthan Royals had a magnificent start with the ball. Trent Boult uprooted KL Rahul’s stumps on the first ball of the innings and trapped Gowtham LBW in the same over.

Prasidh Krishna claimed the third wicket for RR after Jason Holder was caught at mid-on and LSG were 31-3 at the end of powerplay. LSG opener Quinton de Kock hit the first six of the innings in the 7th over and was joined by Deepak Hooda at the crease. Hooda hit three fours to ease off the pressure but the right-handed batter was cleaned up in the 10th over by Kuldeep Sen, who claimed his maiden wicket in the IPL.

Ayush Badoni was the next batter to be dismissed as Chahal scalped his first wicket of the innings after Badoni was caught in the deep by Parag.The leg-spinner struck twice in his third over by dismissing de Kock and Krunal Pandya as LSG were 7 down. Chahal claimed his 150th IPL wicket after Chameera was trapped LBW in the 18th over.

LSG required 34 runs from the final two overs as Marcus Stoinis single-handedly changed the course of the match by smashing 19 runs in the penultimate over which included one four and 2 sixes against Prasidh Krishna. Debutant Kuldeep Sen was given the responsibility to defend 15 runs off the final over and the pacer successfully managed to do so as LSG fell 4 runs short of the target.

Earlier, Rajasthan Royals, who were put in to bat first, made two changes – Kuldeep Sen and Rassie van der Dussen were named in the eleven. RR openers – Jos Buttler and Devdutt Padikkal got off to a solid start as RR were 27-0 after 3 overs. Buttler smoked the first six off the innings in the 2nd over.Padikkal, who was dealing in fours at the other end, got a reprieve after Bishnoi dropped the opener’s catch off his own bowling. Avesh Khan got Buttler’s wicket on his first delivery after the right-handed opener was bowled.RR were 44-1 at the end of powerplay as skipper Sanju Samson, who joined Padikkal, creamed two fours to get going. Jason Holder dismissed the RR skipper, who was trapped LBW in the 9th over. LSG pulled things back brilliantly with the ball after Gowtham scalped two wickets in the next over.

While set batter Padikkal was caught by Holder at slips, Rassie van der Dussen’s stumps were cleaned up by the spinner. The pair of Ravi Ashwin and Shimron Hetmyer built a steady partnership for the fifth wicket. Hetmyer was dropped in the 14th over before Ashwin switched gears and hit consecutive sixes in Gowtham’s over which produced 16 runs. RR were 108-4 with four overs remaining in the innings as the fifty partnership was up for the fifth wicket.

Hetmyer hammered two sixes and a four against Holder in the 18th over which took RR to a strong position, with two overs to go. The penultimate over produced 16 runs as Hetmyer reach his fifty by hitting consecutive sixes after Ashwin declared himself retired out, earlier in the over. While Holder scalped Riyan Parag’s wicket, Hetmyer whacked two more sixes as Rajasthan Royals posted 165/6 in the first innings.