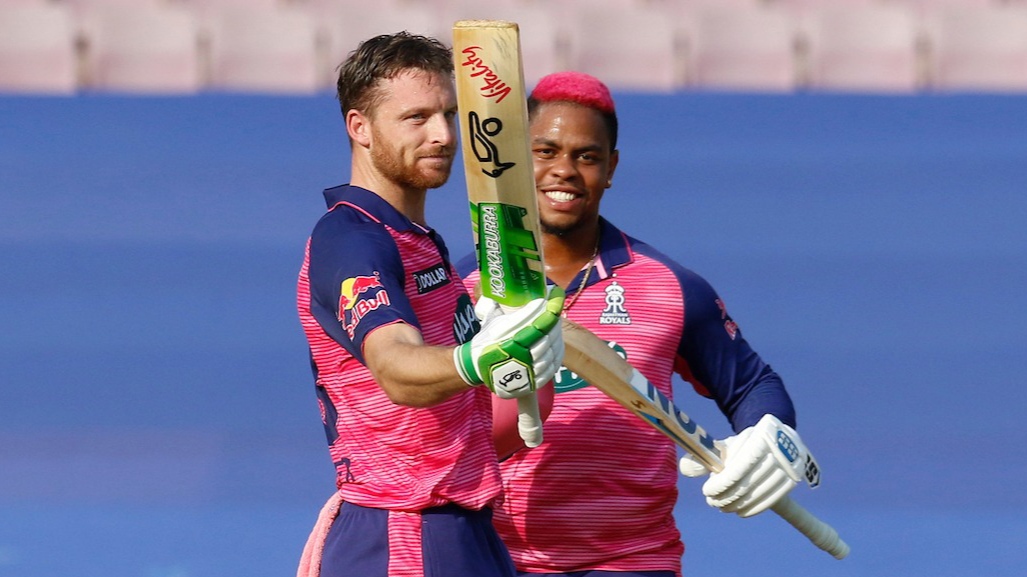 Jos Buttler became the first centurion of the season as a magnificent knock from the opening batter powered Rajasthan Royals to a commanding total of 193/8 before the RR bowling unit successfully defended the total to win the game by 23 runs. The unchanged Mumbai Indians eleven had a challenging task of chasing a target of 194. MI skipper – Rohit Sharma hit his trademark pull-shot against Prasidh Krishna for six but was dismissed in the same over, after he was caught at backward point. Navdeep Saini conceded a six and a couple of fours in the fourth over but the pacer bounced back with a wicket to dismiss Anmolpreet Singh, who was dismissed for 5.

MI were 50-2 at the end of powerplay with Kishan and Tilak Varma at the crease. The duo built a steady partnership for the third wicket and kept the runs ticking. Varma did the majority of the hitting while Kishan played second fiddle. Varma smacked an overpitched delivery for six to bring up the fifty partnership for the third wicket and MI were placed at 94-2 at the half-way mark.

Kishan notched up his half-century in the 13th over with a four against Trent Boult but was dismissed on the final delivery of the over, courtesy of a stunning catch by Navdeep Saini in the outfield. Tilak Varma hit his maiden IPL fifty as MI required 65 off the final six overs. The batter reverse-swept Ashwin for a six but was cleaned up by the spinner on the very next delivery.

Yuzvendra Chahal scalped two wickets on consecutive deliveries in the 16th over to dismiss Tim David and Daniel Sams. MI required 50 off the final three overs. Keiron Pollard hit a four and a six each in the 18th over, bowled by Bolt to get MI closer. Pollard got a reprieve in the penultimate over as 9 runs came from Prasidh Krishna’s over and MI required 29 runs off the final 6 deliveries. Navdeep Saini delivered for RR in the final over with a wicket of Pollard as RR successfully defended their total.

Earlier, Rajasthan Royals, who were put in to bat first, made one change – Navdeep Saini replaced Nathan Coulter-Nile in the eleven. MI made early inroads after Yashasvi Jasiwal was caught inside the circle in the third over as Jasprit Bumrah struck early. However, on the other hand, Jos Buttler hammered 26 runs, including two fours and three sixes in the fourth over, bowled by Basil Thampi.

MI ended the powerplay on a high note as Devdutt Padikkal was caught by skipper Rohit Sharma and RR were 48-2 after six overs.RR skipper – Sanju Samson joined Buttler in the middle as the wicket-keeper batter crossed the half-century mark in the 8th over with two consecutive boundaries against Daniel Sams. While Murugan Ashwin kept things quiet at one end, Tymal Mills conceded 14 off the 10th over. Samson wrapped the over with a six and RR were 87-2 at the half-way stage. 21 runs came off the 11th over, bowled by Murugan Ashwin as boundaries were flowing in plenty from both Samson and Buttler as the fifty partnership was up for the third wicket.

After only 6 runs coming off the 14th over, RR lost skipper Samson, who was caught by Tilak Varma in the deep.RR were 144-3 with four overs left in the innings before the new batter Shimron Hetmyer whacked 2 sixes and 3 fours with brutal force and power to produce 26 runs against Pollard in the 17th over. The left-handed batter added a six and a four to the total in the 18th over. Jos Buttler became the first centurion of the season and reached the landmark in the penultimate over.However, MI picked three wickets in the over, owing to Bumrah’s outstanding death bowling. The pacer took the crucial wickets of Hetmyer and centurion Buttler while Ravichandran Ashwin was run out for 1.MI scalped two more wickets in the final over, bowled by Tymal Mills, as RR finished the first innings with a total of 193-8.