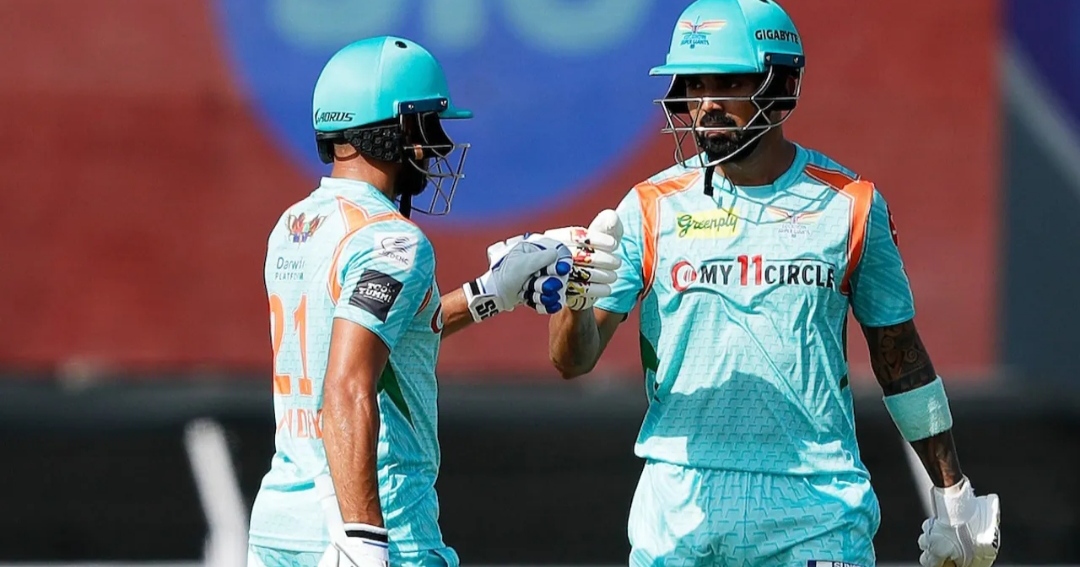 Mumbai, April 16: KL Rahul scored century in his 100th match as Lucknow Super Giants (LSG) were back to winning ways in the TATA Indian Premier League (IPL) 2022 after defeating the Mumbai Indians (MI) by 18 runs on Saturday at the Brabourne Stadium in Mumbai.

KL Rahul rose to the occasion in his 100th IPL match with an unbeaten century to help LSG post a commanding total of 199/4 before LSG won the game by 18 runs in the end. Earlier, LSG, who were put in to bat first, made one change – Manish Pandey replaced K Gowtham in the eleven.

Chasing a challenging total of 200, MI lost an early wicket of skipper Rohit Sharma, who was caught behind in the third over against Avesh Khan. Dewald Brevis smacked his first ball for four and carried the momentum with his attacking shots.20 runs were conceded in the 5th over after Brevis hit two fours and a six against Chameera.

The right-handed batter added two fours in the 6th over but was caught inside the circle as Avesh Khan scalped his second wicket of the innings. Stoinis joined the wicket-takers tally after rattling the stumps of Ishan Kishan as MI lost their third wicket. At the end of 10 overs, MI were 86-3 with Suryakumar Yadav and Tilak Varma at the crease.

The fifty partnership was up for the fourth wicket between Suryakumar Yadav and Tilak Varma in the 13th over. Jason Holder dismissed Tilak Varma with a brilliantly executed yorker to bring the partnership to an end.With 75 required off the final five overs, Ravi Bishnoi dismissed the dangerous Suryakumar Yadav after the right-handed batter was caught in the deep. With 68 required off the final four overs, Kieron Pollard hammered two consecutive sixes against Chameera as 16 runs came from the 17th over.

Fabian Allen was dismissed in the 18th over and MI required 43 off 12 deliveries. Jaydev Unadkat smacked two fours and a six in the penultimate over to bring the equation down to 26 required off the final over.

Chameera conceded only six runs and got an important wicket of Pollard as LSG won the game by 18 runs in the end.

LSG openers were off to a great start after skipper KL Rahul, who was playing his 100th IPL game, was dealing in boundaries against MI’s opening attack.

Quinton de Kock supported the skipper with aggressive shots at the top but the left-hander was trapped LBW by Fabian Allen in the final over of the powerplay and LSG were 57-1 after the first 6 overs.

Manish Pandey creamed three fours to get going as LSG continued to add pressure on the MI bowlers with quick flow of runs. LSG were 94-1 at the end of ten overs. Rahul reached his half-century in the 12th over. 18 runs were conceded in the 13th over after both Rahul and Pandey struck 2 fours each. Murugan Ashwin provided the breakthrough for the Mumbai Indians after Pandey was bowled in the 14th over.

Marcus Stoinis dispatched his first delivery of the innings for a huge six. Rahul, at the other end, clobbered 2 sixes and a four as 150 was up for LSG in the 15th over. Stoinis was dismissed in the 17th over as Unadkat scalped his first wicket of the innings. 22 runs came off the penultimate over as LSG skipper became the second centurion of the season.

Deepak Hooda was caught behind in the final over but LSG posted a massive total of 199/4 in the first innings.