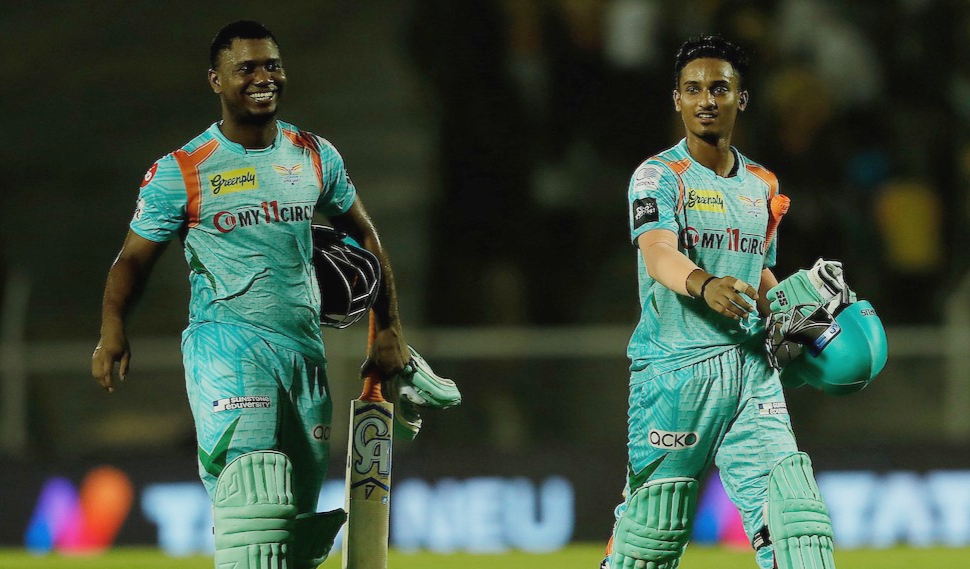 The Lucknow Super Giants (LSG) secured their first victory of the TATA Indian Premier League (IPL) 2022 in style by beating the Chennai Super Kings (CSK) by 6 wickets on Thursday at the Brabourne Stadium in Mumbai.

The Super Giants emerged victorious in a monumental chase of 211 as Evin Lewis’ enthralling unbeaten innings of 55*(23) led LSG to their first victory of the season.The Lucknow Super Giants made one change from their previous game – Andrew Tye replaced Mohsin Khan in the eleven.With a herculean task of chasing a target of 211, LSG openers started on a confident note as both – de Kock and skipper KL Rahul played some audacious strokes at the top.

The boundaries came in plenty as the fifty partnership was up for the opening wicket and de Kock was dropped by Moeen Ali inside the circle in the 6th over as LSG were placed at 55/0 at the end of powerplay. Rahul smacked a maximum to bring up the hundredth six of the season and the LSG openers were striking at ten an over, with runs flowing easily off the bat of de Kock and the Super Giants skipper. de Kock crossed his fifty in the tenth over, bowled by Bravo, which produced only 8 runs.

LSG were 98 without the loss of any wicket after 10 overs.Dwaine Pretorius brought CSK back into the game by dismissing the LSG skipper, who was caught, thanks to a sharp running catch in the deep by Rayudu. Manish Pandey was the next man to depart after he was caught at mid-off by Bravo off Tushar Deshpande’s bowling.

After a temporary slump in run-scoring, LSG struck 15 off the 14th over, courtesy of Evin Lewis’ six and a four but CSK got the all-important wicket of de Kock. Deepak Hooda joined Evin Lewis and the duo collectively smacked two sixes and three fours before Dwayne Bravo dismissed Hooda to become the all-time leading wicket taker in the history of the tournament.With 34 required off the final two overs, Evin Lewis and young Ayush Badoni hammered 25 runs in the penultimate over which included 2 sixes and 2 fours.

Ayush Badoni sealed the chase in style with a maximum to power the Super Giants to their first-ever victory in the tournament. Earlier, the Chennai Super Kings, who were asked to bat first, made three changes to their line-up, with Moeen Ali, Dwaine Pretorius and Mukesh Choudhary being named in the eleven. Robin Uthappa kicked off the CSK innings with two sublime shots for four as the Super Kings scored 14 off the first over, bowled by Avesh Khan.

A brilliant presence of mind and great fielding effort from Ravi Bishnoi produced the first wicket for LSG after Ruturaj Gaikwad was run out for 1. Uthappa single-handedly dominated the powerplay by smashing the ball all around the park with his pure timing and hit eight fours and a six.The opener was then joined by explosive left-handed batter Moeen Ali, who played some cracking shots early in his innings as CSK were off to a flyer, scoring 73-1 after 6 overs. Uthappa’s dangerous knock of 50 off just 27 deliveries came to an end after the right-handed batter was trapped lbw by Ravi Bishnoi. CSK sailed past hundred runs in the 10th over after Shivam Dube, who joined Moeen Ali, creamed three fours against Dushmantha Chameera.

Moeen Ali was cleaned up by Avesh Khan’s full-length delivery in the 11th over. Shivam Dube along with Ambati Rayudu, who was the new man to the crease continued the flow of runs, with Dube doing the majority of the striking. With five overs to go, Rayudu clubbed a giant six against Krunal Pandya as the fifty partnership was up for the fourth wicket. Bishnoi struck at the right time for LSG to dismiss the dangerous Rayudu, who was bowled for 27.

Skipper Jadeja joined Dube, who smacked a monstrous six in the 18th over that nearly went out of the ground. The left-handed batter fell one short of his fifty after he was caught to a fine catch in the deep by Evin Lewis.The former CSK skipper MS Dhoni hammered his first delivery for a six to the off-side followed by a four in the penultimate over.

Pacer Andrew Tye dismissed skipper Jadeja and Dwaine Pretorius on consecutive deliveries but Dhoni wrapped the innings with a four as CSK posted a commanding total of 210/7.