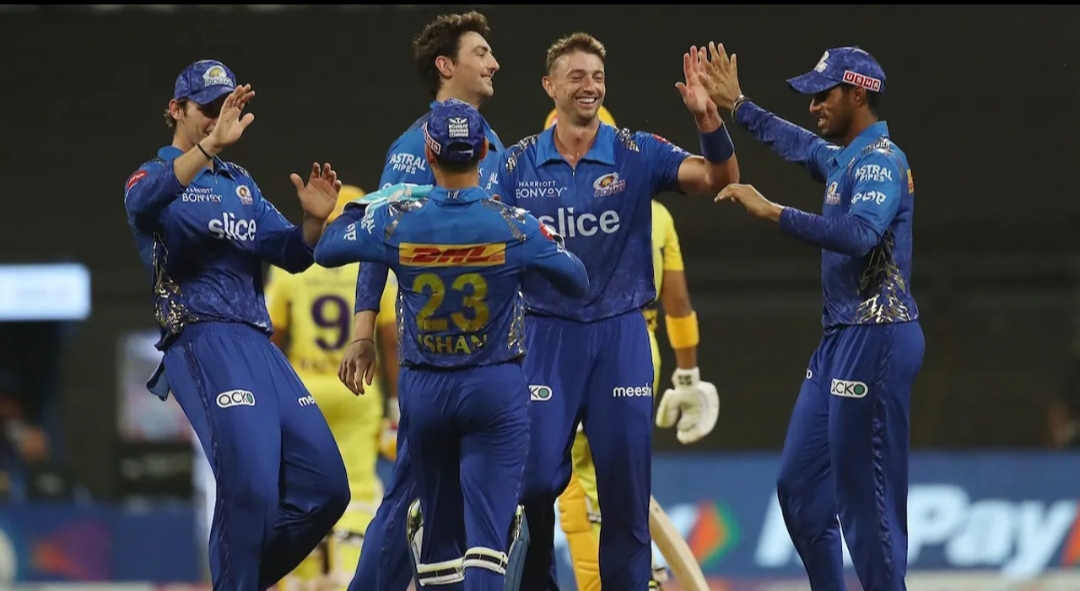 Mumbai, May 13: Mumbai Indians (MI) bounced back with a victory in the TATA Indian Premier League (IPL) 2022 after beating the Chennai Super Kings (CSK) by 5 wickets on Thursday at the Wankhede Stadium in Mumbai.

A fine bowling display led by Daniel Sams’ three wicket haul reduced CSK to 97 in the first innings before a vital partnership between Tilak Varma and Hrithik Shokeen powered MI to a 5-wicket win. Chasing 98 to win, MI lost Ishan Kishan’s wicket in the first over after the opener was caught behind off Mukesh Choudhary’s bowling.

Rohit Sharma’s elegant shots at the start put MI on the front foot. However the MI skipper was caught behind off Simarjeet Singh’s bowling. Both Daniel Sams and Tristan Stubbs were trapped LBW in the 5th over, bowled by Mukesh Choudhary. MI were 36-4 at the end of the powerplay with Tilak Varma and Hrithik Shokeen at the crease.

The duo stitched a vital partnership which moved MI to 66-4 at the halfway stage as they required 32 off 60 deliveries. The duo kept ticking the runs before Moeen Ali deceived Shokeen and castled the stumps. With only 9 runs required, Tim David clobbered a maximum and hit the winning runs in the 15th over.Earlier, CSK, who were put in to bat first, remained unchanged from their previous game.

CSK lost in-form Devon Conway and Moeen Ali in the first over bowled by Daniel Sams. CSK were 5-3 after Robin Uthappa was trapped LBW off Jasprit Bumrah, who bowled a wicket-maiden. Sams scalped his third wicket inside the powerplay after Ruturaj Gaikwad was caught down the leg side.Skipper MS Dhoni was at the crease but MI kept mounting pressure on the CSK batters after Riley Meredith dismissed Ambati Rayudu and Shivam Dube.

Dhoni dispatched his first six of the innings and was leading the charge with the bat for CSK, who were 65/6 at the halfway stage. Kumar Kartikeya claimed two wickets in the 13th over to dismiss Dwayne Bravo and Simarjeet Singh. Tilak Varma took a sharp catch to dismiss Bravo while Simarjeet was trapped LBW. CSK lost their 9th wicket after Maheesh Theekshana was caught by Rohit off Ramandeep Singh’s bowling. Ishan Kishan produced a direct hit to run-out Mukesh Choudhary and CSK were all out for 97.