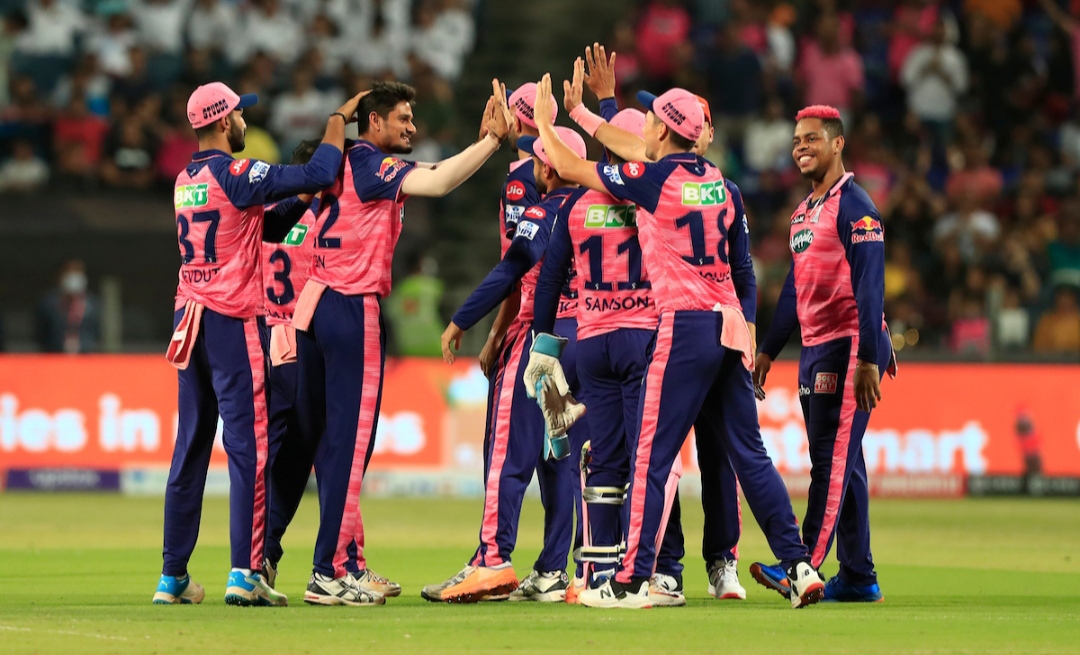 Pune, April 27: The Rajasthan Royals (RR) continued their winning run in the TATA Indian Premier League (IPL) 2022 with a victory against Royal Challengers Bangalore (RCB) by 29 runs on Tuesday at the Maharashtra Cricket Association Stadium in Pune.

Riyan Parag’s unbeaten 56*(31) and Kuldeep Sen’s splendid four-wicket haul led Rajasthan Royals to a 29-run victory as well as to the top of the table.

Chasing 145, RCB lost an early wicket after Virat Kohli was caught inside the circle off Prasidh Krishna’s bowling. Skipper Faf du Plessis batted patiently at the start before creaming three fours and a six as RCB were 37/1 at the end of the powerplay.

Kuldeep Sen claimed two wickets in two deliveries to dismiss du Plessis and Maxwell in the 7th over. While the RCB skipper was caught at covers, Maxwell sliced the ball straight to slips. Shahbaz Ahmed and Rajat Patidar steadied the innings before Ashwin bamboozled Patidar in the 10th over and uprooted the off-stump.

Prabhudessai failed to clear the ropes in the 12th over as Ashwin scalped his second wicket. RCB were in deep trouble as Dinesh Karthik fell short of the crease and was run-out for 6. Ashwin picked his third wicket of the innings to dismiss Shahbaz Ahmed after Riyan Parag took a fine running catch.

Kuldeep Sen and Prasidh Krishna added a wicket each and RCB required 30 off the final over. Harshal Patel was the final RCB batter to be dismissed as Kuldeep picked his fourth wicket of the innings.

Earlier, RR, who were put in to bat first, made two changes – Daryl Mitchell and Kuldeep Sen were named in the eleven. Devdutt Padikkal smacked the first six of the game off Mohammed Siraj’s bowling but the pacer had the last laugh after Padikkal was trapped LBW in the 2nd over.

Ravi Ashwin, who was promoted up the order, hit the ground running with four fours before Siraj took a catch off his own bowling to scalp the all-rounder’s wicket.Josh Hazlewood then claimed the crucial wicket of Buttler, who was caught at mid-on and RR were 43-3 at the end of the powerplay.

Skipper Samson chose the aggressive route and crunched two sixes in the 8th over. Hasaranga put an end to the RR skipper’s innings after Samson missed the reverse-sweep and the ball plunged on to the stumps.Riyan Parag joined Daryl Mitchell in the middle and hammered a six straight down the ground in the 11th over.

RR reached their 100-run mark in the 15th over. Hazlewood and Hasaranga created further damage with the ball as both – Daryl Mitchell and Shimron Hetmyer were caught in the deep. Virat Kohli took a sharp catch in the 18th over to dismiss Trent Boult while Prasidh Krishna was run-out by Prabhudessai. Parag reached his half-century off 29 deliveries and wrapped the innings with a six as RR posted 144-8 at the end of 20 overs.