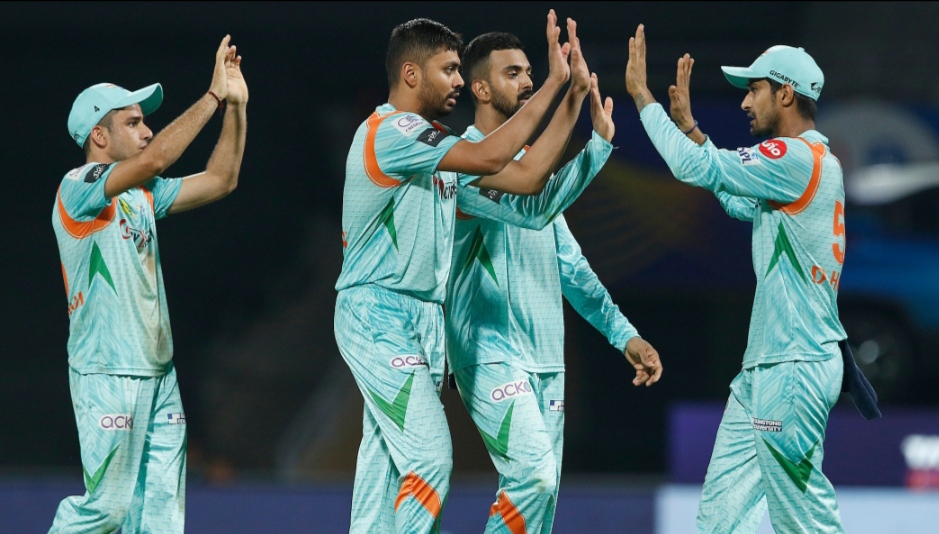 Fifties from skipper KL Rahul and Deepak Hooda guided the Lucknow Super Giants to a competitive total of 169-7 before Avesh Khan’s 4-wicket haul helped the LSG bowling attack restrict SRH to 157/9.Chasing 170, SRH lost skipper Kane Williamson early in the innings. After smashing a four and a six each, the SRH skipper was caught at short fine leg off Avesh Khan’s bowling in the fourth over. Avesh scalped his second wicket inside the powerplay after Manish Pandey grabbed a skier to dismiss Abhishek Sharma and SRH were 40-2 at the end of the powerplay.

Rahul Tripathi, who was joined by Aiden Markram, creamed three boundaries and started his innings confidently. Three boundaries were scored in the 8th over, bowled by Andrew Tye, who conceded 15 runs in his second over of the game. Tripathi capitalised and stormed to 33 off 18 deliveries and SRH were 82/2 at the halfway stage. The very next delivery saw the dismissal of Aiden Markram, who was caught at extra-cover for 12 as Krunal Pandya claimed his first wicket. Pandya added one more wicket to his tally after Tripathi’s valuable knock came to an end as the right-handed batter was caught in the deep for 44.

Nicholas Pooran kept SRH’s hopes alive as the left-handed explosive batter clubbed three fours and a six and was well supported by Washington Sundar at the other end. With 33 required off the final three, Pooran smashed a maximum before Avesh Khan struck twice in consecutive deliveries to dismiss Pooran and Abdul Samad. SRH scored 10 runs in the penultimate over and required 16 off the final 6 deliveries. Jason Holder bowled the final over with perfection by claiming three wickets as SRH fell 13 runs short of the target.

Earlier, LSG, who were put in to bat first, made one change – Jason Holder replaced Dushmantha Chameera in the eleven. Sunrisers Hyderabad made a rewarding start with the ball as they claimed three wickets in the powerplay. While Evin Lewis was trapped in front, Quinton de Kock and Manish Pandey were caught inside the circle. Washington Sundar spun his web to claim two wickets while Romario Shepherd picked one.

LSG were 32-3 at the end of 6 overs as skipper KL Rahul was joined by Deepak Hooda. The duo formed a crucial partnership and got LSG out of trouble after hammering 20 runs off the Umran Malik over as LSG were 68-3 at the end of 10 overs. LSG recovered well after a struggling start and were going strong as the fifty partnership was up between Hooda and Rahul, who ensured the boundaries kept flowing.

Both Hooda and skipper Rahul reached their respective half-centuries but SRH managed to bring an end to the dangerous partnership after Hooda holed out in the deep, off Shepherd’s bowling.With four overs to go, LSG were 120-4 before Sundar conceded 17 runs in the 17th over. While LSG skipper added a four and a six, new batter – Ayush Badoni creamed a boundary to end the over.

Rahul smacked a four and a six but Natarajan’s impressive death bowling brought an end to the LSG skipper’s knock. Krunal Pandya was the next man to be dismissed after the left-handed batter was cleaned up by a Natarajan yorker. Ayush Badoni played a valuable finishing knock by scoring three fours at the end, with 17 runs coming from the final over of the innings as LSG posted 169-7 in the first innings.