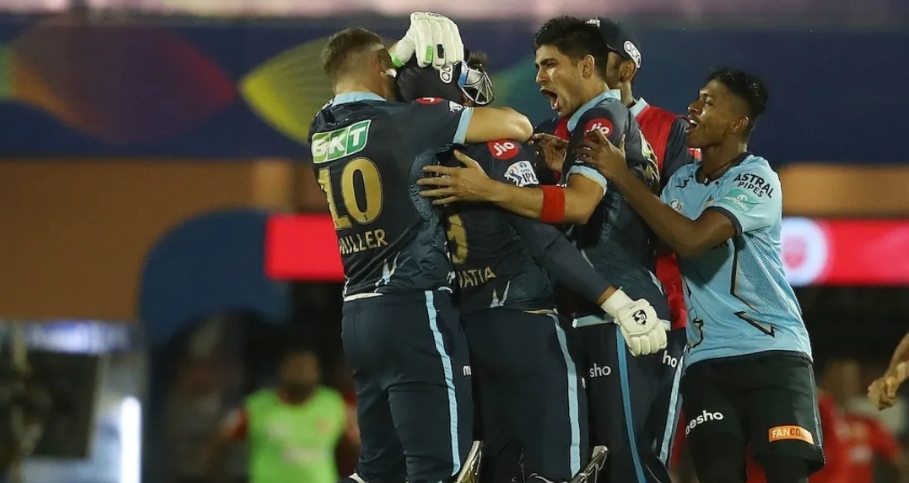 Mumbai, April 9: Gujarat Titans (GT) won three games in a row in the TATA Indian Premier League (IPL) 2022 after defeating the Punjab Kings (PBKS) by 6 wickets on Friday at the Brabourne Stadium in Mumbai with Rahul Tewatia hitting 2 sixes of last two balls.

In a game that went to the final delivery, Gujarat Titans successfully chased down the target of 190 courtesy of Shubman Gill’s elegant 96 at the top followed by Rahul Tewatia’s final over heroics with two sixes in the final two deliveries that sealed the chase. Chasing 190, Gujarat Titans lost the wicket of Mathew Wade early after the left-handed batter was caught behind.

However, Shubman Gill played elegant strokes at the top and was timing the ball to perfection.Sai Sudharsan, who was playing his debut innings, started confidently by smashing two fours and GT were 53/1 at the end of powerplay.The fifty partnership was up for the second wicket and GT were 94/1 at the halfway mark. Gill ensured the momentum stayed with GT by continuing the flow of boundaries from one end while Sudharsan played second fiddle.

PBKS finally broke the partnership after Sudharsan was caught by Mayank Agarwal off Rahul Chahar’s bowling and GT required 56 off the final five overs.13 runs came off the 17th over as GT skipper Hardik Pandya hit consecutive fours against Rahul Chahar. With 32 required off the final two overs, Pandya hit two fours against Rabada in the penultimate over but Rabada managed to dismiss Gill for 96. GT required 19 off the final over. While Hardik Pandya was out on the first delivery, Rahul Tewatia sealed the chase by hitting two sixes in the final two deliveries.

Earlier, Punjab Kings, who were put in to bat first, made one change – Jonny Bairstow was named in the elven. Gujarat Titans found early success with the ball as skipper Hardik Pandya dismissed the opposition captain Mayank Agarwal, who was caught inside the circle for 5.

Dhawan creamed two fours in the 4th over but PBKS lost their second wicket after Jonny Bairstow was caught by short third-man off Lockie Ferguson’s bowling. Both – Gill and Sudharsan hammered a six each as Gill reached his fifty in the 9th over and added two more brilliantly timed shots for four.

PBKS were 43-2 at the end of powerplay before Liam Livingstone and opener Shikhar Dhawan stitched a crucial fifty-run partnership for the third wicket. Despite a great effort in the deep, Livingstone, who was doing the brunt of the hitting, was nearly caught by Hardik Pandya after his shot went for a six.

Rashid Khan brought an end to the partnership after Dhawan was caught behind for 35. Jitesh Sharma, who was the new man in, thumped two sixes and a four to support Livingstone, who was going strong at one end as 24 runs came off the 13th over.

Darshan Nalkande brought the momentum back with GT after the bowler struck twice in consecutive deliveries to dismiss Jitesh Sharma and Odean Smith.

18 runs came off the 15th over, courtesy of consecutive sixes by Shahrukh Khan against Mohammad Shami.Rashid Khan dismissed both Livingstone and Shahrukh Khan in the 16th over. PBKS lost their eighth wicket after Rabada was run-out in the 17th over. Shami cleaned up the stumps of Vaibhav Arora but Rahul Chahar added valuable runs by hitting two fours and a six as PBKS finished the first innings with a total of 189/9.