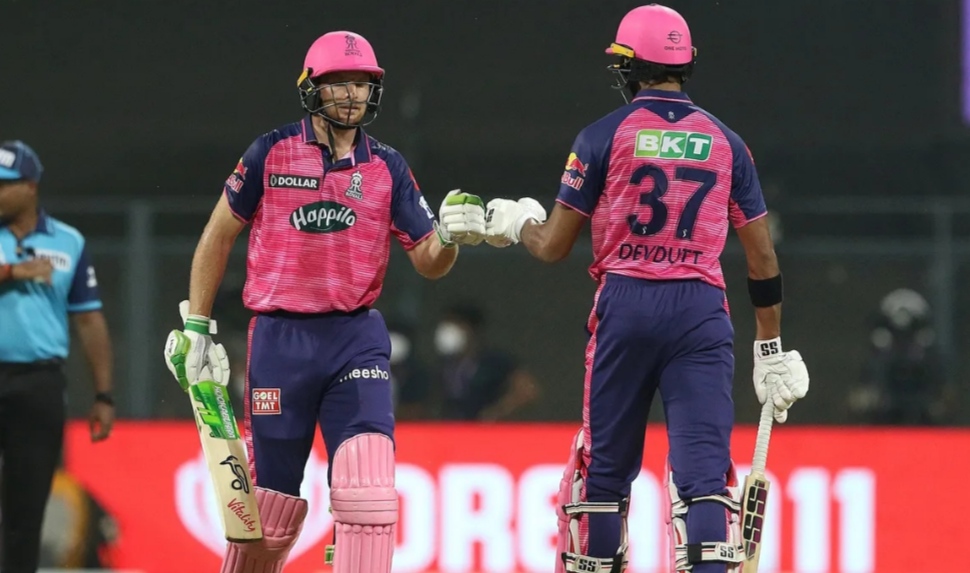 Mumbai, April 23: Rajasthan Royals (RR) climbed to the top of the table in the TATA Indian Premier League (IPL) 2022 after defeating the Delhi Capitals (DC) by 15 runs on Friday at the Wankhede Stadium in Mumbai.

RR climbed to the top of the table with a 15-run victory after Jos Buttler slammed his third century of the season and propelled RR to a mammoth total of 222/2.

Chasing a challenging target of 223, DC openers – David Warner and Prithvi Shaw responded strongly with the bat and DC were 35/0 after 4 overs. Warner hit consecutive fours in the 5th over before the left-handed batter was caught behind off Prasidh Krishna’s bowling. Ashwin scalped Sarfaraz Khan’s wicket on the first delivery of his spell and DC were 55-2 at the end of 6 overs.

DC skipper Rishabh Pant partnered with Shaw to collectively hammer 26 runs off 9th over, bowled by Obed McCoy. DC were approaching the 100-run mark before Ashwin claimed his second wicket to dismiss the dangerous Shaw for 37.

The next over, bowled by Riyan Parag, produced 22 runs after Pant whacked two sixes and a four. Pant got a reprieve in the 12th over but was caught by Padikkal, who took a brilliant catch not much later to put an end to the DC skipper’s innings. Chahal knocked the stumps of Axar Patel in the 13th over and DC were 5 down as Shardul Thakur joined Lalit Yadav at the crease.

Lalit Yadav smacked two fours and a six before DC lost another wicket as Shardul Thakur fell short of the crease in the 16th over. Rovman Powell, who joined Lalit Yadav, kept DC’s hopes alive after the right-handed batter whacked two sixes to bring the equation down to 36 from the final two overs.

However, Prasidh Krishna bowled a brilliant wicket-maiden over and DC required 36 off the final over. Rovman Powell hammered three sixes off the first three deliveries but RR won the game by 15 runs in the end. Earlier, RR, who were put in to bat first, remained unchanged from their previous game.

RR openers – Devdutt Padikkal and Jos Buttler got off to a watchful start before Padikkal creamed three consecutive fours in the 4thover. Buttler clubbed two sixes against Khaleel Ahmed and RR were 44/0 at the end of powerplay.Padikkal smacked his first six of the innings after the fifty partnership was up for the opening wicket. 15 runs came off the 9th over after Buttler whacked a six and four each against Kuldeep Yadav.

The right-handed batter notched his half-century in the 11th over, which produced 17 runs. Buttler continued to mount pressure with the bat and hammered two sixes against Lalit Yadav and RR were 128/0 at the end of 13 overs. Padikkal reached his half-century in the next over with a four. Buttler entered the nineties after he smoked two sixes and a four. Khaleel Ahmed provided the breakthrough for DC after Padikkal was trapped LBW.

Buttler reached his third century of the season, in the 16th over. RR skipper Sanju Samson jumped on the bandwagon and clobbered two sixes and as many fours against Khaleel Ahmed, in the 18th over as well as got a reprieve. Buttler added another six before the right-handed batter was dismissed in the penultimate over off Mustafizur’s bowling. RR skipper Samson wrapped up the innings in style with a six as RR posted a mammoth 222/2 in the first innings.