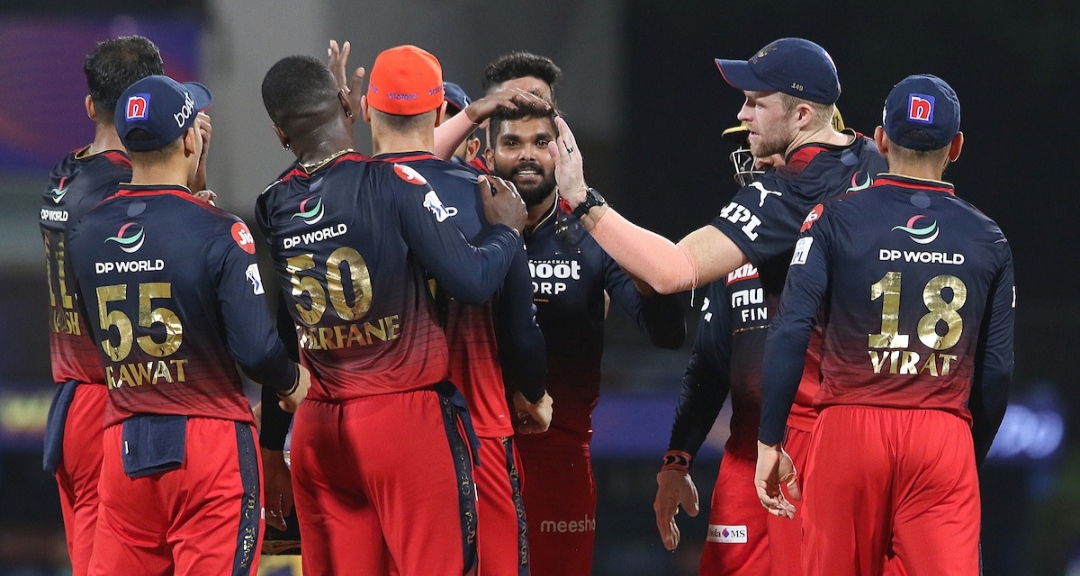 A stellar bowling performance by RCB, spearheaded by Wanindu Hasaranga’s four-wicket haul restricted KKR to 128 before useful lower-order contributions from RCB batters took them over the line in a final-over thriller.RCB, who were chasing 129 runs for victory, remained unchanged from their previous game. Umesh Yadav continued his fine form from the last game and dismissed Anuj Rawat for a duck in the first over of the innings.

The Royal Challengers lost both their openers after skipper du Plessis was caught inside the circle. Virat Kohli, who came in at number 3, hit two glorious fours but was soon dismissed after the former RCB skipper was caught behind off Yadav’s bowling.At the end of powerplay, RCB were 3 down for 36, with David Willey and Sherfane Rutherford at the crease. Fifty was up for RCB in the 8th over as the batting duo released some pressure by attacking spinner Varun Chakaravarthy, who was hit for a four and six each. The Challengers were 59-3 at the end of ten overs as Willey and Rutherford played some risk-free cricket and kept the runs ticking.

Narine brought KKR back into the game by dismissing Willey, who got out to a soft dismissal.Shahbaz Ahmed, who was promoted up the order, proved his striking ability by hammering two sixes against Russell to push things back in RCB’s favour. RCB required 36 runs off the final five overs.

The 100 was up for RCB after Shahbaz smacked a maximum against Chakaravarthy but the right-handed batter was stumped on the very next delivery. With 24 required off the final three overs, there was another twist in the tale after Tim Southee struck twice in the over to dismiss Rutherford and Wanindu Hasaranga. Harshal Patel hit two decisive fours in the penultimate over before Dinesh Karthik wrapped the chase in style with a six and a four.Earlier, the Knight Riders, who were put in to bat first, made one change from their first game – Tim Southee replaced Shivam Mavi in the side.

Openers – Venkatesh Iyer and Ajinkya Rahane made a cautious start to the innings, with 14 runs coming in the first three overs. RCB capitalised on their fine start to dismiss Venkatesh Iyer, who was caught and bowled by Akash Deep in the fourth over. KKR skipper Shreyas Iyer, who joined Rahane, creamed two fours to kick-off his innings. Mohammed Siraj dismissed Rahane after the right-handed batter was caught in the deep by Shahbaz Ahmed, who took an easy catch.

Nitish Rana began his innings in style by smacking a four and a six each against Akash Deep but the pacer bounced back to dismiss the left-handed batter, thanks to a fine running catch from David Willey and KKR were 44-3 at the end of 6 overs.Troubles grew further for the Knight Riders as captain Iyer was caught by du Plessis at long-on against Hasaranga’s bowling. Sam Billings and Sunil Narine were the two new batters out in the middle. Narine started aggressively by smacking a four and six each against Akash Deep. Billings followed Narine and hit a maximum over mid-wicket.Hasaranga claimed two wickets in consecutive deliveries to send Narine and Sheldon Jackson back to the pavilion. While Narine was caught inside the circle, Jackson was bamboozled by the spinner in the 9th over.

The dangerous Andre Russell walked in to bat, with KKR reeling at 76/6 at the half-way stage as the right-handed batter announced his arrival in grand fashion after he thumped a four and six each. Harshal Patel got into the act with a rare wicket-maiden over by picking the wicket of Sam Billings, who was caught by Virat Kohli in the deep. However, Russell had no intentions of backing down as the explosive batter clubbed two giant sixes against Shahbaz Ahmed.

An explosive knock of 25 by Russell came to an end after he was caught behind off the bowling of Harshal Patel, who delivered an impressive wicket-maiden for the second consecutive time. Tim Southee was Hasaranga’s fourth victim after a mistimed shot was safely caught by du Plessis at long-on. Umesh Yadav and Varun Chakravarthy added valuable 27 runs for the final wicket before Yadav was cleaned up by Akash Deep in the penultimate over. The Knight Riders ended up posting a total of 128 on the board.