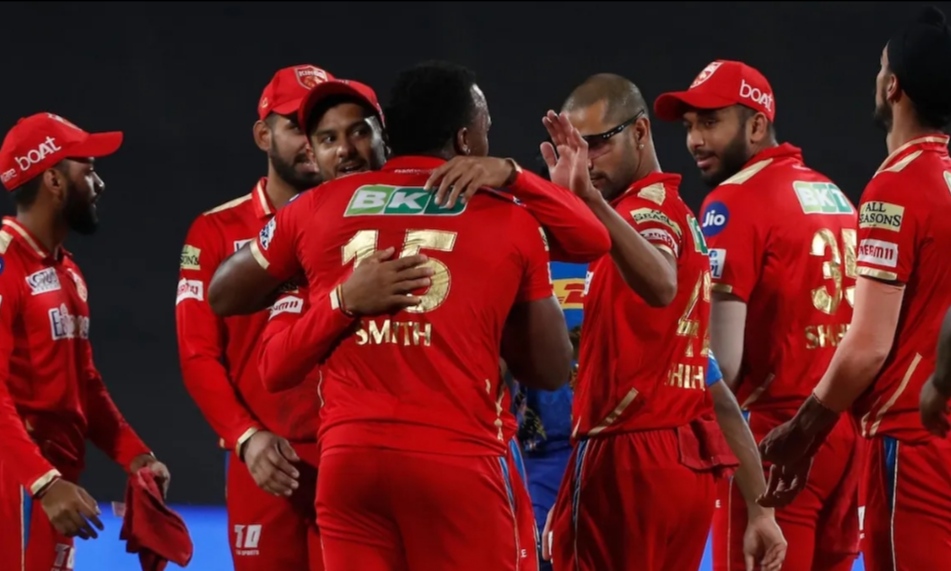 Mumbai, April 14: Punjab Kings (PBKS) were back to winning ways in the TATA Indian Premier League (IPL) 2022 after defeating the Mumbai Indians (MI) by 12 runs on Wednesday at the Maharashtra Cricket Association Stadium in Pune.

PBKS held their nerves and successfully defended the target of 199 after remarkable fifties at the top from Mayank Agarwal and Shikhar Dhawan powered PBKS to 198-5 in the first innings. Chasing 199, Mumbai Indians started on a positive note with the bat after scoring 21 in the first two overs.

However, PBKS did not take too long to claim their opening wicket after skipper Rohit Sharma was caught by Vaibhav Arora at backward square leg. In the next over, Ishan Kishan was caught behind off Arora’s bowling.

MI were 42-2 at the end of powerplay. Dewald Brevis was quickly on the move after the right-handed batter hit two fours and a six. Tilak Varma creamed two consecutive fours before Brevis dispatched four sixes in a row against Rahul Chahar as the 9th over produced 29 runs. Tilak Varma was also dealing in sixes at the other end as MI sailed past 100 in the 10th over.

Brevis got a reprieve on 49 but the right-handed batter was caught on the next ball as PBKS scalped their third wicket of the innings. MI required 68 off 42 deliveries after Tilak Varma was run out in the 13th over. Suryakumar crunched a maximum against Rabada to bring MI closer. With 49 required off the final four overs, MI lost Pollard’s wicket after the right-handed batter was run-out for 10.

However, Suryakumar lofted two sixes to get the equation down to 33 off the final three overs. Arshdeep Singh conceded only 5 runs in the 18th over as MI required 28 runs off 12 deliveries. Rabada got the all-important wicket of Suryakumar Yadav after the right-handed batter was caught in the deep.Odean Smith scalped three wickets in the final over and PBKS won the game by 12 runs in the end.

Earlier, PBKS, who were asked to bat first, remained unchanged from the previous game. Skipper Mayank Agarwal got off the mark with two cracking shots for four. Dhawan went one step further by hitting an aerial shot for a maximum to get off the mark. PBKS were 36/0 after 4 overs. 17 runs came off the 5th over after Agarwal smashed two fours and a six against Murugan Ashwin. At the end of powerplay, PBKS were cruising at 65/0.

PBKS continued striking at 10 runs an over as skipper Agarwal reached his half century with a maximum. Agarwal’s fine knock came to an end after the PBKS skipper was caught by Suryakumar Yadav in the deep off Ashwin’s bowling. PBKS were 99-1 at the halfway stage and opener Dhawan was joined by Jonny Bairstow, who lofted Tymal Mills’ delivery in the 13th over to score his first four of the innings. After Dhawan’s half-century, MI fought back with two wickets in two overs. Bumrah rattled Liam Livingstone’s stumps while Bairstow was bowled by Jaydev Unadkat.

With 5 overs to go, PBKS were 132-3 with Dhawan still at the crease. The left-handed batter clubbed a six on one knee against Thampi before he was caught in the deep in the 17th over. New batter Jitesh Sharma smacked two fours and as many sixes against Unadkat in the 18th over while Shahrukh Khan hammered two sixes in the final over before he was bowled by Basil Thampi as PBKS concluded the innings with a total of 198-5.