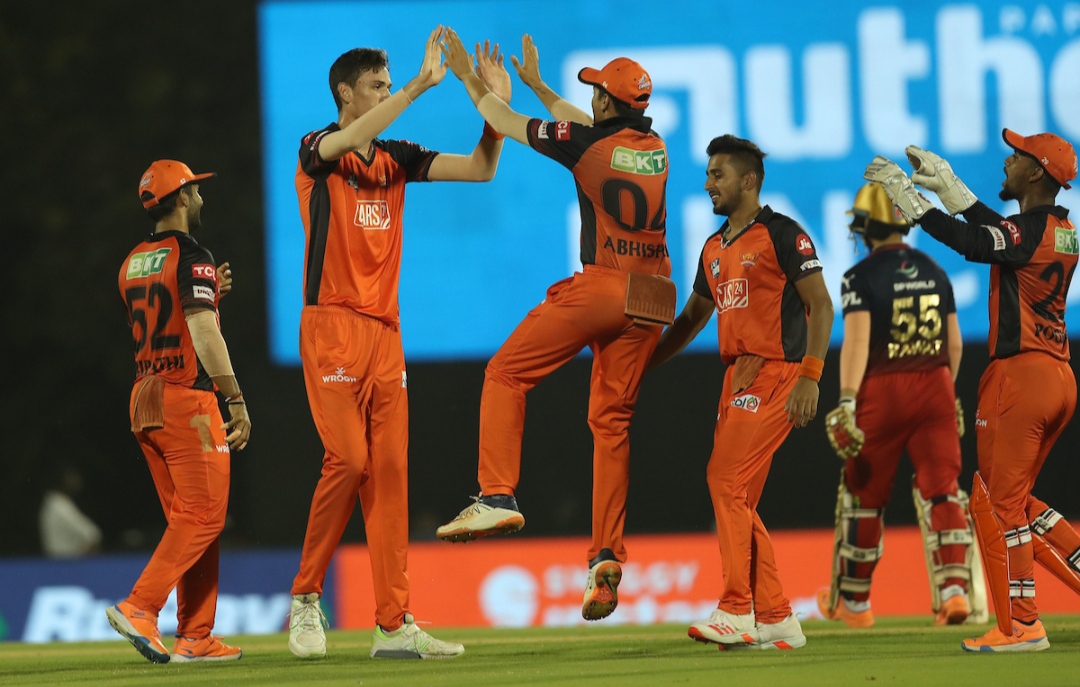 Mumbai, April 24: Sunrisers Hyderabad (SRH) registered a comprehensive victory in the TATA Indian Premier League (IPL) 2022 after defeating the Royal Challengers Bangalore (RCB) by 9 wickets on Saturday at the Brabourne Stadium in Mumbai.

Three wickets apiece from Marco Jansen and T Natarajan restricted RCB to 68 in the first innings before SRH chased down the target with 12 overs to spare. Chasing a target of 69, SRH openers – Kane Williamson and Abhishek Sharma started on a confident note.

Abhishek Sharma did the majority of the hitting and played quality strokes at the top to get going. The left-handed batter raced off to 28 off 17 deliveries with four fours and one six.

SRH skipper Williamson on the other hand, kept rotating the strike and played second fiddle. Williamson and Abhishek Sharma creamed a four each as SRH were 56/0 at the end of the powerplay. Abhishek Sharma fell 3 runs short of a half-century after the left-handed batter was caught in the deep by Anuj Rawat off Harshal Patel’s bowling.

Rahul Tripathi finished things off in style with a six as SRH chased down the target with 12 overs to spare.

Earlier, RCB, who were put in to bat first, were in early trouble after losing four wickets inside the powerplay. Marco Jansen was exceptional with the new ball and claimed the wicket of RCB skipper Faf du Plessis followed by Virat Kohli and Anuj Rawat.

Glenn Maxwell was caught by Williamson, who took a diving catch at extra-cover in the 5th over. At the end of the powerplay RCB were 25-4. Jagadeesha Suchith then struck twice to dismiss Suyash Prabhudessai as well as the dangerous Dinesh Karthik. While Prabhudessai was stumped for 15, Dinesh Karthik was caught behind in the 9th over.

Troubles increased further for RCB after Shahbaz Ahmed was caught behind off Umran Malik’s bowling. Natarajan rattled the stumps of Harshal Patel followed by Wanindu Hasaranga to pick the next two wickets and RCB were 9 down inside 15 overs.

Bhuvneshwar Kumar picked the final wicket of the innings after SRH skipper Williamson took a running catch to dismiss Mohammed Siraj as RCB were 68 all out in the first innings.