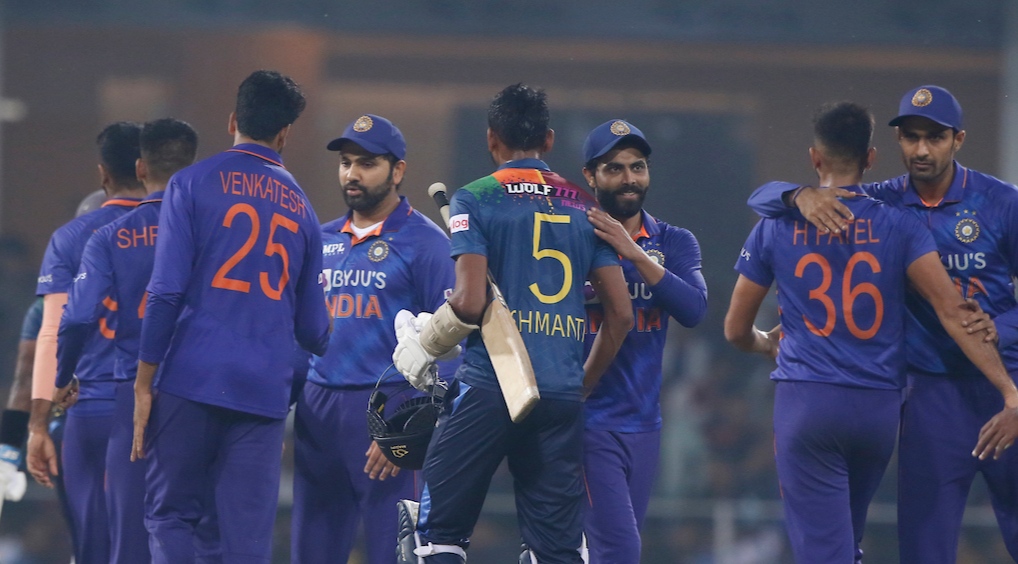 Lucknow, Febuary 25: Ishan Kishan (89) and Shreyas Iyer (57*) helped India to a massive score of 199/2, before their bowlers came up with an excellent performance to keep Sri Lanka in check as the hosts won the first T20I in Lucknow by 62 runs to take a 1-0 series lead.

Winning the toss, the visitors opted to bowl first. But their bowlers could not deliver a disciplined start as Rohit Sharma and Ishan Kishan went on the aggressive from the off. They made full use of the field restrictions, racing away to 58/0 in the Powerplay.

Kishan would hit a blazing fifty, signalling his timely return to form after struggling in the home series against West Indies. He would lose his opening partner and skipper Rohit Sharma though, bowled for 44 by a slower delivery by Lahiru Kumara. It was still an excellent start for India, who had raced away to 111/1 in 11.5 overs.

Shreyas Iyer would join Kishan at the crease and after a couple of tight overs from Sri Lanka, the hosts started to pick up the pace of the innings once again. Kishan was playing some scintillating strokes, swatting the Lankan bowlers with ease. Iyer was meanwhile rotating the strike expertly, as the Sri Lankan bowlers had no answers on how to stem the flow of runs.

It seemed as Kishan would bring up his maiden T20I century but he went for one big shot too many, falling against the medium pace of Dasun Shanaka in the final ball of the 17th over. But the job was done as his 56-ball 89 had set up a perfect platform for a mammoth total.

Iyer then picked up the tempo, piercing the field with surgical precision. He would bring up his half-century in the final over as Ravindra Jadeja only faced four deliveries. India would end up with a total of 199/2, with the visitors now having a mountain to climb during their chase. Their three frontline pacers – Chameera, Karunaratne and Kumara all went for over 10 runs an over, showcasing the dominance of the Indian batters.

In reply, Sri Lanka had the worst possible start to their innings as Bhuvneshwar Kumar struck with his first ball. A back of a length delivery skid onto the bat of Pathum Nissanka and he played it on to walk back for a duck.

Bhuvneshwar would strike again in his second over as Kamil Mishara could not clear the fielder as Rohit Sharma proved to be a safe pair of hands. This made up for the disappointment earlier in the over when Venkatesh Iyer had dropped a simple catch.

Janith Liyanage’s struggle at the crease would end soon as well, as he departed against the bowling of Venkatesh Iyer after scoring a 17-ball 11, going for a pull but only finding Sanju Samson at point.

Sri Lanka’s struggles continued as they lost their fourth wicket before the halfway mark in the innings, as Dinesh Chandimal was stumped for 10 off the bowling of Ravindra Jadeja, who got one to turn away sharply.

Skipper Dasun Shanaka would try a cheeky reverse-sweep against Yuzvendra Chahal and pay the price for it with Bhuvneshwar taking a simple catch. The visitors had now lost half their side and Charith Asalanka from the other end was waging a forlorn battle.

He would bring up his half-century but Sri Lanka failed to get anywhere close to the target. Chamika Karunaratne and Dushmantha Chameera did play some big shots but the visitors could only muster 137/6 in reply, falling short by 62 runs.

India now take a 1-0 lead in the series and extend their winning streak to 10 in the shortest format, with the second T20I set to be played in Dharamsala on Saturday.