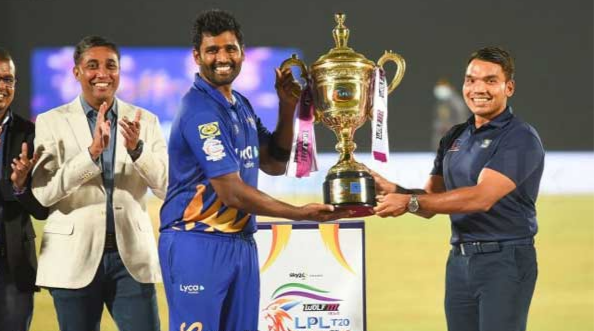 Srinagar, December 24: Jaffna Kings were crowned as the champions of Lanka Premier League 2021 after defeating Galle Gladiators by 23 runs in a high-scoring final at the Mahinda Rajapaksa International Stadium in Hambantota on Thursday.

Avishka Fernando, who smashed 63 runs off 41 balls, and Wanindu Hasaranga, who made a big dent in Galle Gladiators run chase, by picking 2 wickets for 30 in his four overs, starred in the encounter for the Kings.

Chasing 202, Danushka Gunathilaka gave Gladiators a brisk start as he smashed 7 fours and 3 sixes to score 54 runs in 21 balls at a strike rate of 257.14. Seeing the pacers getting hit for plenty of boundaries, Jaffna Kings captain Thisara Perera handed the ball to his trusted spinner Hasaranga, who dismissed Gunathilaka, and also got the wicket of dangerous Ben Dunk for a golden duck in the same over.

After Mohammad Hafeez got run out for 10 in the 7th over by Chaturanga de Silva, Jaffna Kings further stamped their authority on the match.

With required run rate climbing, Gladiators captain Bhanuka Rajapaksa went for a slog sweep off Maheesh Theekshana in the 11th over, but he mistimed his shot, and was caught by Hasaranga at deep-mid wicket for 14. Kusal Mendis, who appeared to be Gladiators’ one ray of hope, was run out by Perera for 39 after a big mix-up in the middle.

Gladiators continued to lose wickets in quick succession, and eventually could only muster 178/9 in 20 overs, falling short by 23 runs.

Earlier, Jaffna Kings captain Thisara Perera’s call to bat after winning the toss proved to be the correct one with openers Avishka Fernando and Rahmanullah Gurbaz giving their side a flying start. The duo added 56 runs in 5.2 overs before the latter was dismissed by Galle Gladiators spinner Samit Patel. Fernando went on to complete his half-century, but Nuwan Thushara dismissed him with a slower one for 63 runs.

Fernando tried to chip the ball over deep-midwicket, but he was deceived by the pace, and Danushka Gunathilaka picked an easy catch.

Tom Kohler-Cadmore also went on to score his first fifty of Lanka Premier League 2021 season, while Shoaib Malik (23 runs off 11 balls) and Perera (17 runs off 9 balls) added crucial runs in the death overs.

Kohler-Cadmore remained unbeaten on 57 off 41 balls as he helped Kings post a mammoth total of 201/3 in 20 overs, setting a target of 202 for Galle Gladiators to chase. Gunathilaka’s fireworks at the start of the chase was not enough for Gladiators and Jaffna Kings won the match easily to lay claim to the prestigious trophy.

The Player of the Season trophy was awarded to Avishka Fernando, who was also named as the man of the match in the final, for his innings of 63 runs in 41 balls.

With inputs from LPL