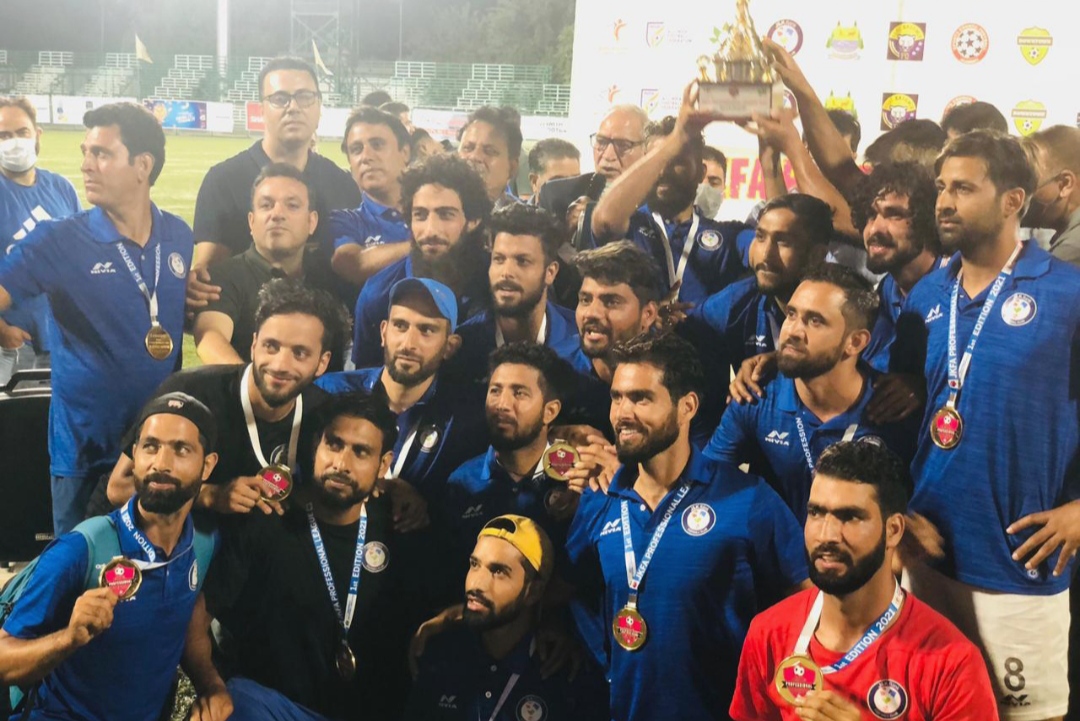 Meanwhile Hyderya Sports FC finished second after holding fan favourite and exciting side like Downtown Heroes FC to a goalless draw in crucial last day match of the league.

On Saturday two matches were played. The Ist match was played between J&K bank XI and Kashmir Avaengers FC. Kashmir Avengers FC went all out from the very start either to make a draw or defeat J&K bank XI in order to earn a position in the league table. But they could not score a goal in the Ist half. On the other hand J&K bank XI played with an attacking spree to maintain the title of unbeaten team. They made certain good moves but were unable to find the net. Ist half ended goalless draw.

The 2nd half started with an aggressive note and both teams trying to find an opening. In 75th minute J&k Bank succeeded in scoring a goal through Faisal Thakur. Kashmir Avengers FC geared up and leveled the score through Saqib in 80th minute. The match ended with 1:1 goal draw. Saqib of Kashmir Avengers FC was declared as man of the match.

The 2nd match was played between Downtown Hero’s FC and Hyderya sports FC. This was an important match for both the clubs for securing the 2nd position of the league.

The clubs were introduced to the Divisonal Commissioner Kashmir , PK Pole who was the chief guest on the occasion.

While Hyderya Sports needed a draw to stay at second place , Downtown Heroes FC needed an outright win. In that background, Downtown Heroes played attacking football and wanted to score goal. On contrarary , Hyderya Sports were contend to settle for a draw.
While the match ended in goalless draw ,but fans hailed Heroes for playing like Heroes .

The revereed guests distributed prizes memontos among the Winners and Runner-up teams. They also distributed certificates of merits to the representatives of print and electronic media and other agencies who contributed for making the Professional League a success. JKFA Expresses sincere thanks and gratitude to all the participating teams , Sponsores, JK Police Department, Print & Electronic Media, with whose efforts the Tournament was a grand success.

JKFA also acknowledges with thanks the logistic support provided by JKSC. JKFA also thankful Nuzhat Gul, Secretary JKSC for extending full support for the successful completion of the Tournament.